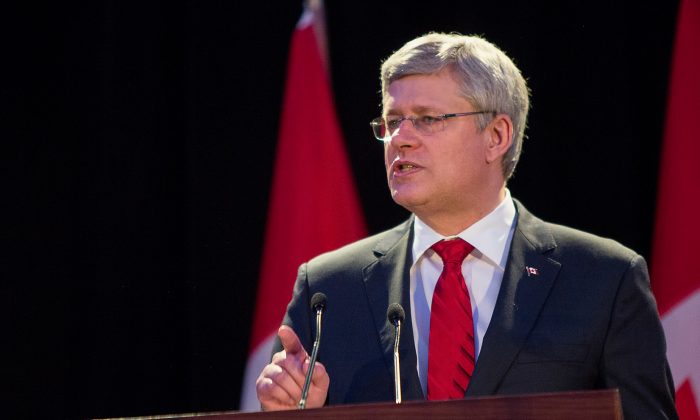 Canadian Prime Minister Stephen Harper speaks during a fundraiser event for the Canada’s Memorial to Victims of Communism project at the Toronto Congress Centre on May 30, 2014. (Evan Ning/Epoch Times)
Canada

Canadian multi-millionaire Robert Herjavec squeezed his fortune out of a hard life that began in Croatia, then part of communist Yugoslavia, where his father faced a life and death behind bars because he wouldn’t stay quiet.

After being sent to prison 22 times for speaking out against the communist regime, Herjavec said his father was told the next time he went to prison, he’d never come out.

“And so he took my mom and I and we came to this great country,” said the star of “Dragons’ Den” and “Shark Tank.”

Herjavec made the remarks at an event he hosted May 30 in Toronto to raise funds for Canada’s Memorial to Victims of Communism. The monument, to be built in Ottawa, will pay tribute to the many millions of people who died under communist regimes, and the 8 million who fled communist countries for a new life in Canada.

Canadian Prime Minister Stephen Harper delivered a lengthy speech, laying out in no uncertain terms his own thoughts on communist regimes.

Harper said the last century saw communism’s “poisonous ideology and ruthless practice” creep into countries all over the world with catastrophic outcomes.

The atrocities of communism are felt very closely by Canadians, Harper said, as nearly a quarter of Canadians are either victims of communism or are the descendants of those who were.

“What history has taught us is one clear thing, that the political ideologies that promise utopia lead to the opposite—hell on earth.”

Freedom, Harper said, is at a core of what it means to be a Canadian, and while Canada has a long history of guarding these freedoms at home and defending freedom abroad, there have been times that Canada didn’t live up to these aspirations.

“There have been times when we’ve fallen short, heeded the calls of those who preferred to see Canada sidelined, to see Canada serve as a neutral bystander instead of a principled actor, those who preached moral-equivalency and who said that Canada should learn to accept totalitarian communism as just another option. They were the people who showed blindness to the unparalleled crimes of Maoism in China,” Harper said.

He said that the Canadian government has taken a lesson from these past experiences to shape the current foreign policy the country follows.

Harper also used the opportunity to take a jab at Russian President Vladimir Putin and Russia’s annexation of Crimea, and pledged Canada’s support for democracy in Ukraine. He warned that Putin’s militarism extends beyond Ukraine.

“It threatens the security of our Eastern European allies and, by extension, the stability and security of the world.”

Yonah Kim Martin, deputy leader of the government in the Senate, who was born in South Korea, shared the tragedy behind her own path to Canada.

She paid tribute to the 516 Canadians who died fighting communism in Korea. Some 378 Canadians are still there, buried in the land they died protecting.

“We are eternally grateful,” said Martin.

Her father lost his mother and sister behind the 38th parallel that divided the peninsula.

Another senator, Thanh Hai Ngo, fled communism in Vietnam, to find refuge in Canada in 1975.

“Many of us are here tonight with the common experience of the heinous crimes of an evil regime,” Ngo said.

“Like many other Vietnamese Canadians, I had to escape a place I could no longer call home after the fall of Saigon in 1975.”

“After facing deadly storms, pirates, threats, famines, and desperations, the Vietnamese boat people were welcomed by Canadians with open arms, and thousands of Vietnamese refugees in search for freedom were given a new beginning.”

Fleeing oppression and finding opportunity in their new homes was a theme that night, exemplified fittingly by the host.

After fleeing communist Yugoslavia, Herjavec’s family arrived in Halifax with just a suitcase, and eventually settled in Toronto.

His dad’s life in Canada wasn’t easy though. He swept floors in a factory. Tougher times came when he lost his job.

Herjavec recalled how he tried to comfort his dad by suggesting that he could apply for unemployment benefits.

“He looked at me and said ‘No, I will never file for unemployment because this country owes me nothing but an opportunity.’”

The event that night was put on by Tribute to Liberty, the charity behind the Canada’s Memorial to Victims of Communism project. The memorial is expected to be completed in late 2015. For more information, visit TributeToLiberty.ca

With reporting by Madalina Hubert