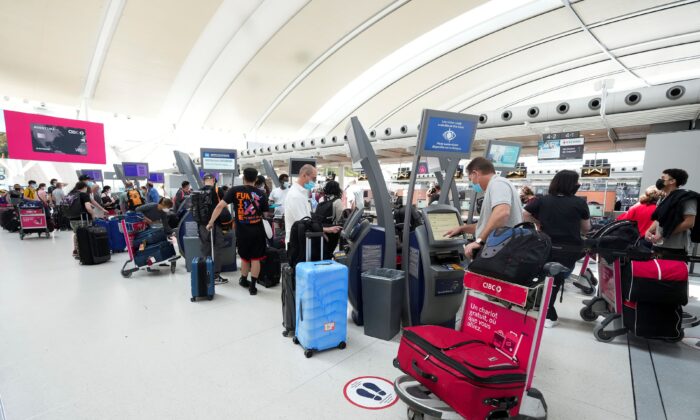 People wait in line to check in at Pearson International Airport in Toronto on May 12, 2022. (The Canadian Press/Nathan Denette)
By Noé Chartier

The federal COVID-19 vaccine mandates preventing unvaccinated Canadians from flying or working in the public service are being suspended, cabinet ministers announced on Tuesday.

Transport Canada says vaccine requirements for domestic and outbound international travel, as well as federally regulated transportation workers will be suspended as of June 20.  Passengers and workers are still required to continue wearing masks.

International travellers coming to Canada still need to be vaccinated.

The vaccine mandates for the public service, the RMCP, and federally-regulated sectors will also be lifted as of June 20. The federal government said public servants who were on leave without pay as a result of the vaccination policy will be able to go back to work.

A spokesperson for the Department of National Defence told The Epoch Times on June 14 there is no change to the vaccine mandate for military personnel.

Intergovernmental Affairs Minister Dominic Leblanc said the vaccine mandates were effective but were never meant to be permanent.

“In no way do we regret having acted cautiously,” Leblanc said at a press conference, warning that lifting the mandates would not have an immediate impact to reduce airport delays.

Leblanc also said his government is prepared to reinstate the mandates if the COVID-19 situation “takes a turn for the worse.”

Transport Minister Omar Alghabra said the mandates would be kept in place for cruise ship crews and travellers. He said the measure is necessary as people are in the same place close to each other for long period of times.

Health Minister Jean-Yves Duclos said the mandates were lifted “after reviewing the latest scientific evidence, evolving COVID-19 epidemiology globally and in Canada, vaccination coverage rates, and listening to the advice of public health officials and experts.”

When asked by a reporter why vaccine mandates were only being removed now, despite evidence in existence months ago that suggested the vaccines were not effective in preventing infection, Duclos defended the timing.

“We’ve been very successful until now,” he said, adding that chief public health officer Dr. Theresa Tam and other experts have recommended a transition away from mandates.

“We’re transitioning, because we want to continue being so successful,” Duclos said.

The health minister also said there would be a push in the coming months, with the help of the provinces, to increase booster uptake.

The suspension of the mandates comes amid mounting pressure in recent weeks from various sectors to remove COVID-19 restrictions.

The tourism and travel industries have asked the government a number of times to remove travel restrictions, as bottlenecks in airports have caused major delays.

Conservatives, as well as a small number of dissenting Liberal MPs, have also said that the COVID-19 mandates need to be removed.

Tories have introduced motions to remove vaccine mandates, which have been defeated in the House of Commons.

“We have not been able to find anyone who has told the government to keep the legacy health restrictions and the assault on mobility rights in place,” said Conservative MP and transport critic Melissa Lantsman in the House as she introduced a motion to remove the mandates on May 19.

The Liberals campaigned on a promise to impose mandates during the 2021 election campaign, and implemented them shortly after winning a second minority government in the Sept. 20 election.

In transportation, mandates have been applied to airplanes, trains, and some marine vessels since Oct. 30, 2021. Vaccine mandates were also imposed on the public service and federally-regulated workplaces.