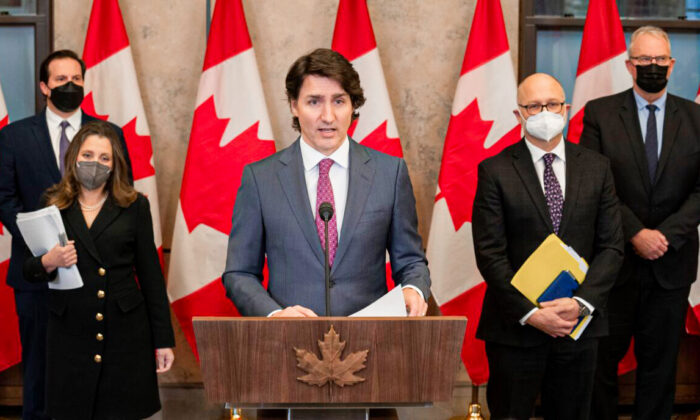 Prime Minister Justin Trudeau along with some of his cabinet ministers speaks at a press conference in Ottawa on Feb. 14, 2022. (The Canadian Press/Adrian Wyld)
Canada

Trudeau Declares State of Emergency Over Protests Against COVID-19 Mandates

Four premiers disagree with invoking the act
By Noé Chartier

The Canadian federal government has declared a state of emergency due to the ongoing protests against COVID-19 mandates and restrictions by truckers and their supporters.

In a press conference on Feb. 14, Prime Minister Justin Trudeau said the protests aren’t peaceful and are harming the economy, while measures are needed to strengthen law enforcement agencies.

“On Friday, Ontario invoked a state of emergency to respond to the blockades. This was the responsible and necessary thing to do. Today, to continue building on these efforts, the federal government is ready to use more tools at its disposal to get the situation fully under control,” he said.

Trudeau said the application of the Emergencies Act will be limited in time and will be used in a targeted and proportionate fashion. He added that the act will be used to protect critical infrastructure such as airports and cross-border crossings.

Deputy Prime Minister Chrystia Freeland announced a number of measures to reduce funding to the protests. These include broadening anti-money laundering measures to crowdfunding platforms and digital currencies. Banks will also be able to freeze accounts of entities involved in the protests.

Freeland also said that for companies whose trucks are used in blockades, their corporate accounts will be frozen and their insurance suspended.

Trudeau is the first prime minister to invoke the Emergencies Act.

The premiers of Alberta, Saskatchewan, Manitoba, and Quebec stated that they don’t support the prime minister’s use of the act.

“We have all of the legal tools and operational resources required to maintain order. The Act would add no relevant additional powers or resources,” Alberta Premier Jason Kenney wrote on Twitter on Feb. 14.

“The illegal blockades must end, but police already have sufficient tools to enforce the law and clear the blockades, as they did over the weekend in Windsor,” Saskatchewan Premier Scott Moe wrote on Twitter.

“Therefore, Saskatchewan does not support the Trudeau government invoking the Emergencies Act. If the federal government does proceed with this measure, I would hope it would only be invoked in provinces that request it, as the legislation allows.”

Manitoba Premier Heather Stefanson also wrote in a tweet that invoking such powers isn’t needed in her province.

“I am proud of Manitoba’s law enforcement officials & have full confidence in them to protect our communities. The proposal from the federal government to use the Emergencies Act is not helpful to the situation at the Emerson Border.”

In a press conference earlier on Feb. 14, Freedom Convoy organizer Tamara Lich said the protesters will continue demonstrating until their demands are met.

“We will remain peaceful, but planted on Parliament Hill until the mandates are lifted,” Lich said.

Brian Peckford, former premier of Newfoundland who is acting as a spokesperson for the Freedom Convoy, said at the press conference that the protest in Ottawa has been peaceful and questioned the justification for declaring a state of emergency.

“Looking at the situation, especially as it relates to the Convoy 2022, which is here in Ottawa … is peaceful. The streets are clean [and] crime is down since the truckers arrived,” Peckford said.

The Justice Centre for Constitutional Freedoms, which is providing legal representation for the organizers, said in a statement ahead of the declaration that it would “immediately file a court application seeking to overturn such a declaration.”

“Peaceful protesters who feed the homeless, shovel snow, pick up garbage, dance in the streets, play street hockey, wave Canadian flags, sing the national anthem and set up bouncy castles for children do not ‘seriously endanger the lives, health or safety of Canadians,’ nor are these peaceful activities ‘of such proportions or nature as to exceed the capacity or authority of a province to deal with it.'”

Interim Conservative leader Candice Bergen said her party will be looking at what the Liberal government is proposing and evaluate the rationale, and then decide whether to support it.

“At first blush, we are very concerned with what we see,” Bergen said at a press conference on Feb. 14.

The Emergencies Act defines a national emergency as “an urgent and critical situation of a temporary nature that a) seriously endangers the lives, health or safety of Canadians and is of such proportions or nature as to exceed the capacity or authority of a province to deal with it, or (b) seriously threatens the ability of the Government of Canada to preserve the sovereignty, security and territorial integrity of Canada.”

Trudeau invoked a Public Order Emergency citing “threats to the security of Canada.”

Typically, an emergency expires in 30 days unless it’s revoked or prolonged by the government.

The act grants powers to the government to strip citizens of the right to assemble if there is a “reasonable expectation” it may lead to a breach of the peace.

Citizens can also be prohibited from traveling to or within designated areas or from using specified property. The government can also assume control of public utilities and services and direct people to render essential services.

In the current context of blockades or occupations, the government will be able to compel tow truck companies to remove vehicles blocking streets or lanes, which they have previously refused to do in relation to the protest in Ottawa.

Failure to comply with the act can lead to, on summary conviction, a fine up to $500 or imprisonment for up to six months, and on indictment, a fine not exceeding $5,000 and imprisonment up to five years.

The City of Ottawa and the province of Ontario have also declared states of emergencies in recent days.