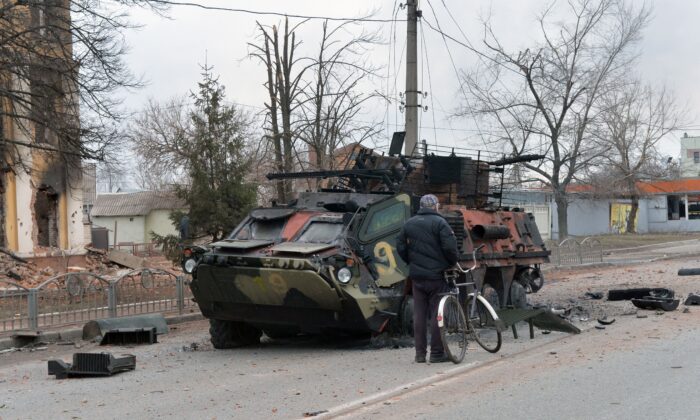 A man looks at a destroyed Ukrainian armoured personnel carrier near the city of Kharkiv, located some 50 km from Ukrainian-Russian border, on Feb. 28, 2022. (Sergey Bobok/AFP via Getty Images)
Canada

Some Canadian soldiers were still in Ukraine on the day Russia began its invasion, a Canadian general told the House National Defence Committee on March 9.

“With the cueing that we had, with the intelligence we had, with what we understood Putin’s plans to be—including some intelligence that air attacks were imminent—it was prudent to return our troops initially in western Ukraine to stay in country as long as we could, and the last few elements of our troops left the morning of the attack,” said Major-General Paul Prévost, director of staff of the Strategic Joint Staff.

“So, great intelligence, and it was a calculated decision.”

Russia began its invasion of Ukraine on Feb. 24, with Russian President Vladimir Putin citing the need to “strive for the demilitarization and denazification of Ukraine.”

Defence Minister Anita Anand announced on Feb. 13 that Canadian troops in Ukraine would be temporarily moved “elsewhere in Europe.”

“The security of our Canadian Forces is our top priority,” she wrote on Twitter.

CBC had reported on Feb. 13 that a contingent of roughly 260 Canadian Armed Forces (CAF) personnel had arrived in Poland, which would approximate the size of the CAF training mission Op UNIFIER. The mission’s website says the operation involves around 200 members.

Prévost also provided the committee his assessment on the state of the conflict and said that what is portrayed in the media is what is being captured on the “intelligence side.”

He said Russia is “running into logistics problem, they’re running into military issues, they were expecting to probably have a bit more of control of the airspace.”

“Obviously that campaign is not going as anticipated.”

Prévost said he wasn’t surprised about the state of the conflict, crediting some of the Ukrainian resistance prowess on training provided by CAF and on military aid provided by Western countries. He also said it has demonstrated known limited Russian capabilities.

Prévost also told the committee that trying to impose a no-fly zone over Ukraine is “off the table.”

A no-fly zone is something Ukrainian President Volodymyr Zelensky and others have requested. NATO rejected the idea as it would entail entering into a military confrontation with Russia.

Conservative MP Cheryl Gallant asked the committee witnesses if there was any indication that Russia was targeting humanitarian convoys on purpose.

“What we have seen is that humanitarian corridors have been targeted, whether [it’s] intentional or not, it’s where we have a gap in intelligence,” said Kevin Hamilton, director general of international security policy at Global Affairs canada.

With Russia’s invasion reportedly facing setbacks, Liberal MP Jennifer O’Connell asked if there was a chance Putin will lash out.

Hamilton answered it’s one of the speculative scenarios being considered.

“One of the scenarios that is out there and relates to the question is the fact that because the campaign is not going as well as Putin had expected, there is a risk that, for egregious as this war has been to date, he could resort to options that are even more lethal. And so that’s something we’re alive to, and we’re looking at.”