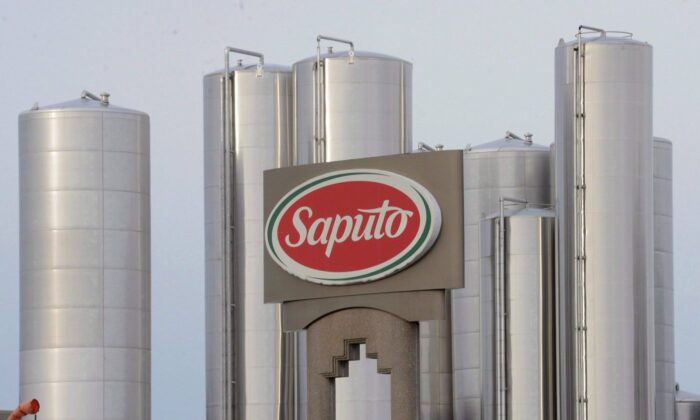 A sign at a Montreal Saputo plant is shown on Jan.13, 2014. (The Canadian Press/Ryan Remiorz)
Canada

Global dairy giant Saputo Inc. is confident demand for its products will remain strong in Canada despite efforts to increase farm gate milk prices for the second time this year.

“Dairy continues to be, on a pound for pound basis of protein, still a value for the consumer,” Carl Colizza, Saputo president and chief operating officer of North America, said Thursday during a conference call to discuss the company’s latest results.

“We do feel strongly that despite the pricing pressures and the general economy, dairy will continue to fare well.”

The Canadian Dairy Commission said last week it received a request for a mid-year milk price hike from Dairy Farmers of Canada. The federal body, which oversees Canada’s dairy industry and supply management system, said it will hold consultations on the request next week.

The price hike, if approved, would be effective Sept. 1 and Colizza said Saputo would “absolutely be recovering costs” by passing those higher prices on to customers.

Still, while demand for dairy is expected to remain strong, he said there is some “trading off” that occurs when prices increase.

“Recipes can change (and) customers may move over from higher cost to higher value cheeses,” Colizza said. “We do see that kind of shift on a regular basis.”

Saputo board chairman and CEO Lino Saputo Jr. said the company faced commodity price volatility, higher input and logistics costs, and labour and supply constraints, most notably in the U.S.

“Where we faced the most adversity was in the U.S. where challenges have been more acute in terms of labour, inflation, and supply chain (issues),” he said during the call.

The company struggled with high rates of absenteeism in the U.S., a problem worsened by the Omicron surge, which disrupted production schedules and impacted service levels, Saputo said.

“Accelerated inflation following the escalation of the conflict in Ukraine added further downward pressure on margins,” he said. “We expect this new round of pricing actions to alleviate the impact of near term inflation.”

Despite the challenges in the U.S., the company’s Canada, Argentina and U.K. businesses performed well and were in line with expectations, Saputo said.

Revenue totalled $3.96 billion for the quarter, up 15 percent from $3.44 billion in the same quarter a year earlier.

Saputo was expected to report 25 cents per share in adjusted profits on $3.69 billion of revenues, according to financial data firm Refinitiv.