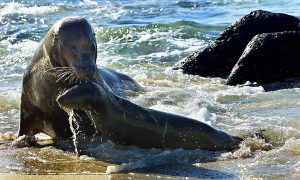 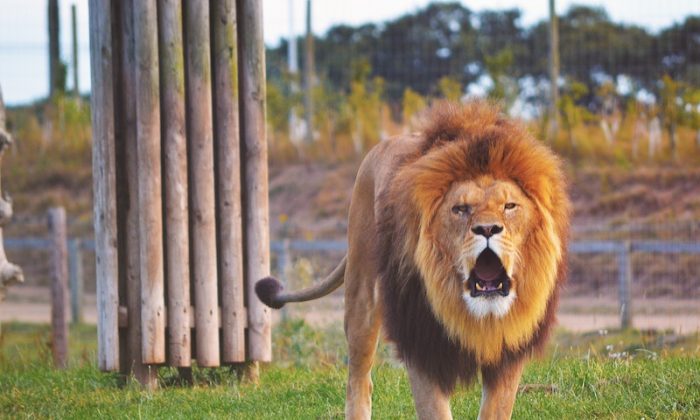 Stock photo of a lion sitting on a grass field. (Adam King/Unsplash)
Canada

A Canadian couple was photographed kissing behind a dead lion they shot during an African safari, drawing ire from social media users around the world.

The photo, taken last month, shows a woman and man embracing behind a photo of the lion in South Africa, reported Canada’s Global News. It was posted on the Facebook page for trophy-hunting company Legelela Safari.

It’s not clear if the couple shot the lion. Big-game hunting is legal under South Africa.

The safari company praised the Edmonton couple for their “hard work” in bringing down “a monster lion.” #yeg
https://t.co/Si1B4xWWFC

“Hard work in the hot Kalahari sun … well done,” the original post said, it was reported. “A monster lion.”

Another photo showed the couple posing with the carcass of a white lion.

The Mirror reported that the two were identified as Carolyn and Darren Carter, who own Solitude Taxidermy. Their Facebook and Instagram accounts were made private, presumably amid a bevy of backlash about the lion photos. However, their Twitter page is still public.

“Back in South Africa! Part two of our safari!” they wrote on Twitter on June 26. The tweet also mentions Legelela Safaris.

Darren told The Mirror about the dead lion photo: “We aren’t interested in commenting on that at all. It’s too political.”

On social media, many people flooded them with negative comments.

“Your despicable hunting photos have made headline news,” one woman wrote, reported Global News. “You aren’t heroes but villains. What a disgrace you are.”

Another person said that they would face karmic retribution for their actions.

Global News reported that on their taxidermy website, other photos of hunted big-game animals are featured.

There has been speculation that if some African countries were to end big-game trophy hunting, it would harm conservation efforts.

According to Conservation Magazine, Peter A. Lindsey of Kenya’s Mpala Research Centre found that 86 percent of big-game hunters “told the researchers they preferred hunting in an area where they knew that a portion of the proceeds went back into local communities.”

“Nearly half of the hunters they interviewed also indicated that they’d be willing to pay an equivalent price for a poorer trophy if it was a problem animal that would have had to be killed anyway,” the magazine says.

Meanwhile, the Bubye Valley Conservancy in Zimbabwe, which had 400 lions as of 2015, is funded entirely by hunting, the BBC reported, adding that a ban would be “devastating.”