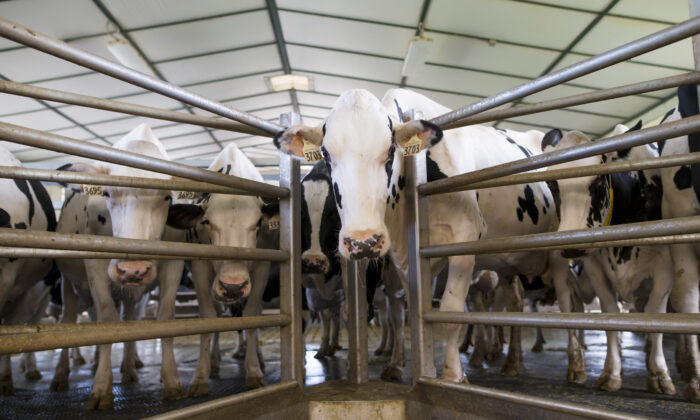 Canada and Ireland are rolling out policies to force their farmers to cut carbon emissions to a point that the farmers say would affect food production. Despite the potential negative consequences, the policies would seem to only achieve minute results for the “decarbonization” agenda.

Some Canadian provincial officials recently criticized their federal government for setting a goal of cutting emissions from synthetic fertilizer use by 30 percent by 2030 without first consulting the provinces “on what is achievable or attainable.”

“Provinces pushed the federal government to discuss this important topic, but were disappointed to learn that the target is already set,” Saskatchewan and Alberta ministers of agriculture said in a July 22 statement.

“This has been the most expensive crop anyone has put in, following a very difficult year on the prairies,” Alberta Minister of Agriculture Nate Horner said in the release.

“The world is looking for Canada to increase production and be a solution to global food shortages. The Federal government needs to display that they understand this.”

Slashing fertilizer use by 20 percent could cost Canadian farmers more than $48 billion in lost sales due to lower yields by 2030, according to a 2021 study commissioned by Fertilizer Canada, an industry group (pdf).

Meanwhile, the Canadian fertilizer industry already has a program called 4R Nutrient Stewardship that would, if rolled out across the major farming areas, cut emissions by 15 to 22 percent while also boosting profits by using fertilizers more efficiently. The government’s insistence on the 30 percent figure thus translates to a reduction of about 0.1–0.2 percent of Canada’s 2019 emissions and about 0.002–0.005 percent of world emissions beyond what the industry works to achieve on its own.

Ireland is in a similar situation. Agriculture Minister Charlie McConalogue is reportedly about to agree to a 27 or 28 percent carbon emission reduction goal for his sector.

Agriculture accounts for more than a third of the country’s carbon-equivalent emissions, notably due to its robust cattle farming that feeds not just its domestic market, but also significant beef and dairy exports.

The Irish government’s climate plan calls for a cut of 22 to 30 percent. At the top end of the range, the plan would cause “significantly reduced production” and potentially “devastate the farming sector in Ireland,” Irish Farmers Association President Tim Cullinan previously said.

Ireland’s agriculture emissions add up to about 21 megatons of CO2 a year. Cutting it by 28 percent would lead to global emissions dropping by 0.05 percent.

Cullinan has questioned what good it would do if other countries don’t follow suit.

“We have to question what it is for,” he said at a November demonstration, The Irish Times reported.

He pointed out that Ireland already runs “one of the most efficient” farming operations in the world.

Regulations that in effect downsize farming have recently prompted large protests in the Netherlands and led to the economic collapse of Sri Lanka.

The last round of carbon emission targets was pledged by governments at the COP26 climate summit last year. Many climate scientists predict that growing emissions will cause more severe weather events, such as storms and droughts, though historically the more catastrophic predictions haven’t materialized.

Critics have pointed out the “decarbonization” agenda would undercut living standards without achieving meaningful change in the climate. For one thing, China, the world’s largest carbon emitter by far, and India don’t intend to constrict their economies toward carbon reductions.