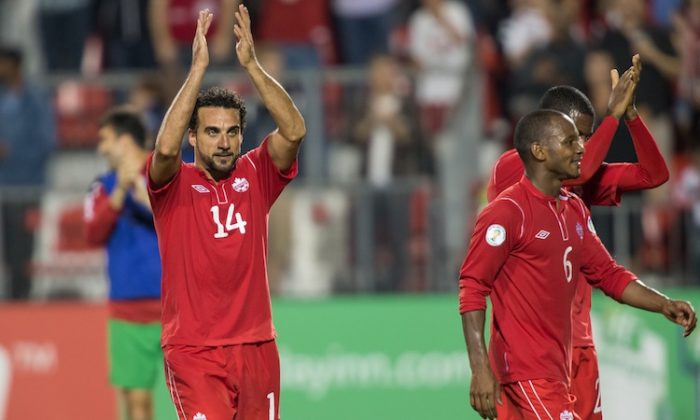 Canada’s World Cup qualification campaign hit a major speed bump at Estadio Rommel Fernandez in Panama City on Tuesday when the men’s national team suffered a 2–0 loss, their first of the qualifiers.

After a crucial win last Friday in Toronto, Canada stood first place in their qualification group. But now, after the loss, the team that hasn’t qualified for the World Cup since 1986 sits in third place.

In the hostile environment of Panama, Canada came out flat and was soundly beaten by an energetic Panamanian side courtesy of a goal in each half.

To compound the problems, Dwayne De Rosario suffered a knee sprain just before a bank of lights went out early in the game. About 15 minutes later, just before the lights came back on and play resumed, De Rosario was subbed off. Canada would miss his leadership, goal-scoring, and creativity.

The rest of the Canadian team was unable to make up for his loss and went down meekly.

A draw would have been a great result for Canada, which had never lost to Panama in seven prior meetings.

“We were second-best in everything,” Canadian coach Stephen Hart said in a report on mlssoccer.com.

“I thought our heads dropped way too easily because one goal was scored on us.”

Canada was guilty of poor defending on Panama’s first goal—a header off a corner kick. They didn’t have a defender guarding the far post to clear a Rolando Blackburn header. Blackburn also out-jumped Canada’s taller defenders to connect with the ball.

Panama’s confidence was soaring and by the end of the first half, they had 65 percent of the possession. The second half was more of the same.

Panama left no doubt when Alberto Quintero raced down the left flank to the goal line and cut a pass back to Blas Perez in the 57th minute. The striker who plays for FC Dallas in Major League Soccer easily jabbed in the second goal for the hosts.

The pressure on Canada was greater last Friday for their home match against Panama at BMO Field in Toronto. Canada was in a must-win situation with Honduras crushing Cuba 3–0 earlier in the day.

The Reds started very brightly but captain Kevin McKenna couldn’t find the back of the net with his headers. His header off a Will Johnson free kick in the 36th minute hit the post.

Canada had 58 percent of the possession in the first half, but no goals to show for it.

Panama, which strangely decided not to warm up prior to the start of the game, got off to a better start in the second half.

But Canada played with belief and determination, and a bit of ingenuity gave them the 1–0 win.

Simeon Jackson was fouled to the left of the Panamanian 18-yard box after a driving run. Atiba Hutchinson quickly stepped up while the Panamanian defenders stood around seemingly dumbfounded about the foul call. He played in a cross to De Rosario who had a simple tap in for the winning goal.

“I put myself in a good spot and made eye contact [with Hutchinson],” De Rosario said about the 77th-minute winner at BMO Field in an interview with Sportsnet after the match. “We’ve done it before against Ecuador.”

“The goal came off of some quick thinking,” Hart said.

Having a fit Hutchinson was critical for Canada. Hutchinson provided the attacking flair in midfield as well as some terrific work defensively. He was deservedly chosen as “Man of the Match.”

Canada has two remaining games to qualify for the “hexagonal”—the (possibly) final qualification hurdle on Oct. 12 and 16.

It is crucial for Canada to beat Cuba at home on Oct. 12 before traveling to Honduras, where a win may be necessary as well.