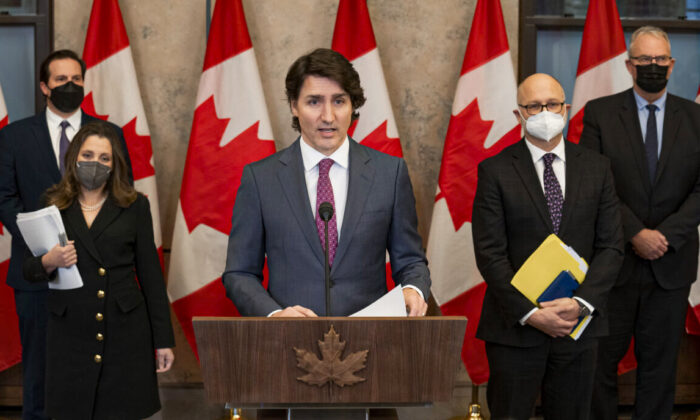 Prime Minister Justin Trudeau announced today that he is revoking the use of the Emergencies Act, saying the situation is no longer an emergency.

Trudeau defended invoking the act in the first place, saying “It was the responsible and necessary thing to do” and there was evidence that individuals wanted to “undermine and even harm Canada’s democracy.”

He made the announcement at a press conference in Ottawa on Feb. 23 as the Senate was debating whether to confirm the government’s decision to invoke the act, after MPs on Feb. 21 passed a motion along party lines to approve a 30-day extension of the act.

Trudeau originally invoked the act on Feb. 14 to deal with the protests and blockades, declaring a public order emergency.

Invocation of the act granted the federal government powers to freeze protesters’ and supporters’ bank accounts without a court order, as well as the ability to compel towing companies to tow away trucks parked in downtown Ottawa since Jan. 28, which they had earlier refused to do.

Despite revoking the act, Trudeau said a parliamentary committee would still be struck to review the declaration of emergency. An inquiry will also be established within 60 days to examine what occurred, as per the statutes of the act.

“It’ll be important that we gain a fuller understanding of what gave rise to this kind of disregard for laws and threat to our democracy. We need to make sure our institutions are prepared and ready in the future,” Trudeau said.

The objective of the cross-country Freedom Convoy was to demand the lifting of all COVID-19 mandates and restrictions. It was originally initiated by truckers opposed to the federal government’s vaccine mandate imposed in mid-January on truck drivers who cross the U.S. border.

As the protests expanded to include blockades at several Canada-U.S. border crossings, the Omicron wave was receding and provinces started to lift restrictions, such as scrapping the vaccine passport.

Before the Emergencies Act was invoked, the busiest Canada-U.S. border crossing, at Ambassador Bridge connecting Windsor, Ont., with Detroit, Mich., had already reopened on Feb. 14 after being blocked for about a week, after police made arrests to clear the blockade.

The blockades at the border crossings in B.C. and Alberta also ended shortly thereafter, and the only major protest left was in Ottawa.

Police cleared all protesters from downtown Ottawa during the Feb. 18–20 weekend and proceeded to gate the area to control individuals and prevent other protests from forming near Parliament Hill.

However, on Feb. 21, the government said the act was still necessary to ensure new protests or blockades would not form again, with Trudeau saying that truckers were regrouping outside Ottawa and had an intent to create more blockades.

On Feb. 23, after Trudeau revoked the use of the act, he was asked what has changed since Feb. 21, when the House passed a motion to approve use of the act.

“This morning we concluded in consultation with the various police services and security experts that the tools that our various police forces had in normal times were sufficient to continue to maintain law and order in the country once it had been restored,” Trudeau said.

He said that violations of the law during the 10 days the act was in effect will still be tracked by the justice system, but that measures such as the freezing of bank accounts are currently being reversed.

The RCMP stated earlier today that it was reaching out to financial institutions to unfreeze accounts.

“I think there are reflections on how our police of local jurisdictions are able to deal with certain threats that were not common in the past years. The mobilization through social media of extraordinarily motivated crowds is something that we need to reflect on and make sure that they have the tools to be able to manage.”

Trudeau also mentioned the need to reflect on the role of “misinformation,” “disinformation,” and foreign money and influence in “attempts to undermine or even destabilize our democracy.”

Interim Conservative leader Candice Bergen reacted to the announcement in a statement.

“Today’s announcement is proof that the Prime Minister was wrong when he invoked the Emergencies Act,” she said.

“Nothing has changed between Monday and today other than a flood of concerns from Canadian citizens, bad press, and international ridicule.”

Bergen added her party would seek answers, especially concerning when the government will announce its plan to “end the unscientific mandates and restrictions.”