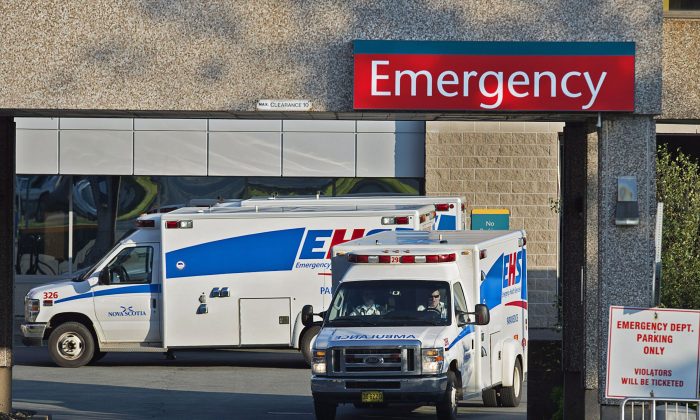 Ambulances are seen at the Dartmouth General Hospital in Nova Scotia on July 4, 2013. The leading causes of death among Canadians have all shown a sharp decline over the past decade, according to Statistics Canada. (The Canadian Press/Andrew Vaughan)
Canada

The leading causes of death among Canadians have all shown a sharp decline over the past decade, coinciding with medical advancements and better preventative measures.

Earlier this week, Statistics Canada released its age-standardized mortality rates, which measures the number of deaths per 100,000 population and removes age as a factor.

The analysis concluded that between 2000 and 2011, all 10 leading causes of death in Canada fell 20.6 percent. The declines were significant, with stroke rates down 41.2 percent and heart disease down 40.1 percent.

“We can’t pinpoint one single factor, but there are many things that contribute to the decline. We have seen a decline in smoking, better treatment and control of blood pressure and lipids, and better management of those living with disease,” said Christine Le Grand, a senior researcher at the Heart and Stroke Foundation.

“It’s great news that we are helping people survive. [However],I think the flip side is that more people are living with disease than in the past.”

This is reason, LeGrand notes, that more emphasis needs to be put on preventative efforts and reduction methods to ensure people are not living with a particular disease.

“There is a spectrum of people living with disease and those conditions every day,” she said.

“In provinces there is a bit of an East-West gradient. In the East we have much higher levels of risk factors—obesity, blood pressure, physical activity—than what we would see in the Western provinces, such as B.C. There are variations of risk factor profiles.”

Ontario and British Columbia saw age-standardized mortality rates drop the most compared to the Canadian population as a whole. Canada’s territories, meanwhile, had mortality rates surpassing the national average.

Cancer, which has ranked as the leading cause of death in Canada since 2000, declined 14.6 percent over 2000-2011. Cancer rates among men accounted for a substantial portion of the reduction, falling 19 percent, while rates declined 10.9 percent for women.

According to Dr. De, the top four cancers—prostate, lung, breast and colorectal—have been dropping in part due to better screening and protective measures. Other factors such as declines in smoking rates have also played a significant role in the figures.

New screening programs that are being implemented by health care providers for cancers such as breast cancer may lead to future drops, he suggested.

“This theme of changes in treatment and coverage has a role to play. Over the last 15 to 20 years there has been a lot better treatment for prostate cancer management, we have much better hormonal treatment, and there have been improvements in radiation therapy in the last 10 years,” said Dr. De.

Chronic lower respiratory diseases, accidents, diabetes, Alzheimer’s disease, influenza and pneumonia, suicide, and kidney disease were among the other leading causes of death.

Kaven Baker-Voakes is a freelance reporter based in Ottawa