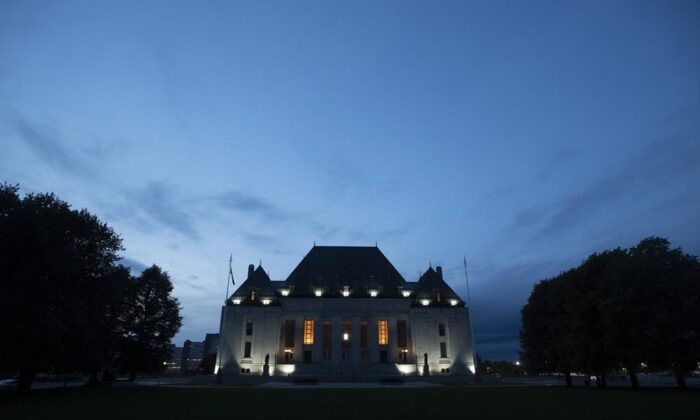 The Supreme Court of Canada is seen at sunset in Ottawa on September 1, 2020. (The Canadian Press/Adrian Wyld)
Canada

TORONTO—Canada’s top court is expected to rule Friday on whether Ontario Premier Doug Ford’s decision to slash the size of Toronto’s city council during the last municipal election was constitutional.

The Supreme Court of Canada decision is set to be delivered roughly a year before Ontario’s next municipal vote.

The 2018 municipal campaign was well underway when the Ontario legislature passed a law that reduced the number of council seats in Toronto to 25 from 47, aligning them with federal ridings.

At the time, Ford—a former Toronto city councillor and failed mayoral candidate—argued the change would streamline council operations and save $25 million.

Critics, however, denounced it as undemocratic and arbitrary.

Toronto successfully challenged the legislation in Superior Court, with the judge deeming it unconstitutional.

Justice Edward Belobaba found the law infringed on the free-expression rights of candidates by affecting their ability to campaign, and on the rights of voters by preventing them from casting a ballot that could result in effective representation.

Ford threatened to use the Constitution’s notwithstanding clause to push through the change. The clause gives provincial legislatures and Parliament the ability to bring in legislation that overrides provisions in the Charter of Rights and Freedoms, but only for five years.

In the end, the Progressive Conservative premier didn’t have to invoke the clause as the province won a stay of the decision pending appeal. Toronto’s election went ahead with the reduced council size.

In its arguments to the Court of Appeal, the province said the law was a “proportionate measure” to address “dysfunction” in city council, which it said was caused by having too many councillors.

The city, meanwhile, said the results of the 2018 vote should be allowed to stand until the next election, which is set to take place next October. It sought to have the court strike down the legislation as unconstitutional, arguing, among other things, that it violated unwritten constitutional principles of democracy.

Ontario’s top court was split on the matter, with three judges ruling to overturn Belobaba’s decision and two to uphold it.

The majority found the legislation did not infringe on candidates’ or voters’ ability to express themselves freely. The dissenting judges found it did interfere with the free-expression rights of candidates.

The Supreme Court of Canada agreed to hear the city’s challenge of the Appeal Court ruling. A hearing was held in March.

In its written submissions, the city argued the change caused significant disruption and confusion for candidates and voters.

It also again argued that the law breached “the unwritten constitutional principle of democracy.”

The province’s submissions said voters and candidates had all the information they needed on who was running in each ward prior to the vote.

It also said unwritten constitutional principles can’t be used to strike down legislation—but even if they could, the province argued, there is no basis to find they were infringed in this case.