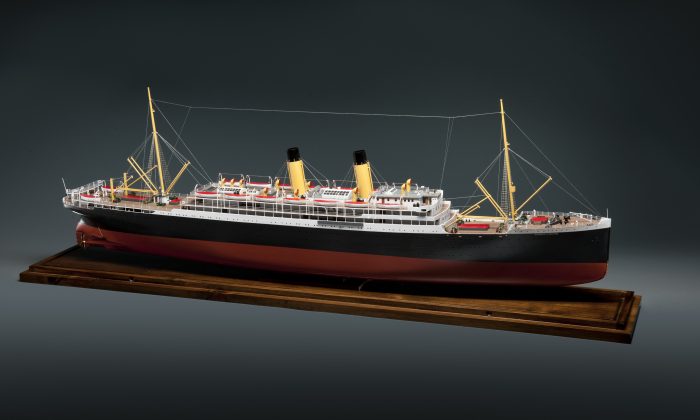 A model of the Empress of Ireland, with wire stretching between masts so that radio operators could communicate with other vessels and wireless stations. (Frank Wimart, courtesy of CMH)
Arts & Culture

Canada’s Titanic: The Sinking of the Empress of Ireland

In 1914, the CPR ship RMS Empress of Ireland sank off the coast of Rimouski, Quebec, just 14 minutes after it was struck by a Norwegian coal ship. The 14,000-ton Empress was rammed mid-ship by the Storstad, a 6,000-ton vessel heading up the St. Lawrence River.

The Empress was in good hands with the experienced Captain Henry Kendall at the helm, but the boat was broadsided with such force that it didn’t stand a chance.

As William Clark, a stoker who had survived the sinking of the Titanic, said: “The Titanic went down like a sleeping beauty. The Empress of Ireland rolled around like a pig in mud.”

In mere minutes it was gone. It sat in 42 metres of water six killometres from Sainte-Luce-Sur-Mer, lying on its starboard side until years later when shipwreck divers became interested.

In 1999, the site of the wreck was declared to be of historical and archaeological importance and became protected under the Cultural Property Act and was listed in the register of Historical Sites of Canada.

Along with her sister ship the Empress of Britain, the Empress of Ireland ferried hundreds of thousands of people between England and Canada, many of whom where immigrants.

According to John Willis, curator at the Canadian Museum of History (CMH), the sinking of the Empress of Ireland, which claimed 1,012 lives, is at heart a human tragedy of unspeakable proportions.

The disaster made headline news at the time, but as Willis states in a press release, the story “fell by the wayside” largely because World War I began soon after.

To mark the centennial of the sinking, the exhibition “Canada’s Titanic – The Empress of Ireland” will run at the CMH until April 2015.

The collision between the two ships happened on a dark night when the St. Lawrence suddenly became blanketed with thick fog. The Empress left Quebec City on May 28, 1914, for its 96th trans-Atlantic voyage to Liverpool with 1,477 passengers. There were 171 members of the Salvation Army aboard, heading for a World Congress in London, and the band struck up the hymn “God Be With You Till We Meet Again” as they sailed.

The captain was not at fault. He was on the bridge at the time of the collision and ordered the lifeboats launched. But the ship lurched, falling on its side and Kendall was thrown into the water. He started swimming and found a piece of wood to cling to.

Picked up by a crew member in a lifeboat, he immediately took charge of rescue operations. However, he gave up after a couple of hours when he determined that, due to the icy water, people would have either drowned or died from hypothermia.

The wreck happened where the water was only 42 metres deep. After initial dives to search for victims, the sinking was more or less forgotten. The 840 passengers who died numbered more than those who lost their lives in the Titanic disaster two years earlier. The sinking of the Empress came to be known as “Canada’s Titanic.”