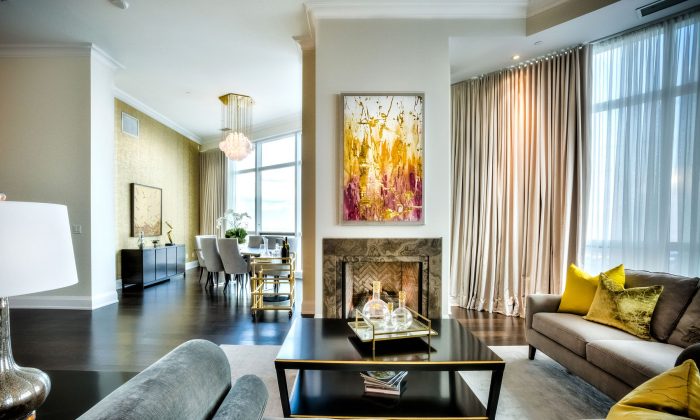 Canada’s Tallest Condo: Why Aura Is a Game-Changer

Riz Dhanji possessed a palpable sense of pride as he held forth in the posh penthouse atop Canada’s tallest condo tower, Aura at College Park.

“This is the finale,” Canderel Residential’s vice-president of sales and marketing told Epoch Times during a recent event to showcase fully furnished top-level suites at Aura, the 80-storey, 275-metre mammoth at Yonge and Gerrard that cost $645-million to develop over nearly a decade.

“A lot went into making this construction marvel happen, and we’re excited to see the end of it.”

The base is anchored by Bed Bath & Beyond, Marshalls, and a branch of Madonna’s Hard Candy Fitness chain (membership is included for Aura owners). Along Gerrard are Red’s Wine Tavern, Duke’s Refresher + Bar, and Scaddabush Restaurant, and there’s 51,000 square feet of retail on the complex’s subway level.

All penthouses have 12.5′ ceilings and wide-plank wood flooring throughout, with limestone tile in the foyer. Kitchens come with custom cabinetry, marble slab countertops and backsplash, and an island counter with under-mount sink. There’s a stainless steel Sub Zero fridge and wine cooler, and a Wolf gas cooktop, oven, and microwave.

Amenities at Aura include party rooms, a bar and catering kitchen, dining room, games room, theatre, and billiards room. There are three guest suites, nine high-speed elevators, and an underground parking garage. The building has a 24-hour concierge, and its two-storey sky lobby, adorned with public art, overlooks College Park’s three-acre green space, which is being redeveloped by Canderel.

What’s got everybody buzzing, however, is the new lighting feature at the top of the city’s tallest condo, a total of 1.2 km of LED strips of varying lengths, designed “to recall the form of the tower we see by day at night,” noted project architect Barry Graziani.

Aura’s light-striped crown is a Toronto first. But then the building is responsible for numerous precedents.

Aura’s light-striped crown is a Toronto first. But then the building is responsible for numerous precedents.

It was the first development of this magnitude along the city’s main drag. “And the success of Aura has triggered a renewed interest in Yonge,” Graziani said, noting all the projects being either proposed or built from the waterfront up to Bloor Street “and beyond.”

Aura was the city’s first tower proposed at 75 storeys, with “capability to go up to 90.” (Supporting a vertical world that large required a 20-metre-deep excavation hole and massive structural columns resting on 11′ by 8′ concrete footings, equal to the footprint of a small house.)

Graziani stressed it would be nearly impossible to find another single parcel of land this large downtown, while noting that Aura’s 1,000-square-metre-plus floor plates would be outlawed under new tall building guidelines, which set a limit of 750 square metres. The tower was also developed before the city had a formal design review process for new residential projects, but went through a design review of its own, scrutinized by architects from across North America, he points out.

Aura was the first development to feature a suspended pedestrian walkway over a construction site, connecting Yonge through to the green space in the centre of College Park, Barbara Ann Scott Park, while work continued below. It was also the first project in Toronto to feature cantilevered construction hoarding above street level, enabling the public realm to be “reinstated” around the tower’s base while construction continued for three more years above, Graziani explained.

And it was Toronto’s first condo to offer retailers a 60,000-square-foot floor plate, which Graziani said opened up the market to users that typically located in suburban big box malls. “Now they could come downtown and have the floor size they needed to function.”

Aura was a “major undertaking” for Canderel, Dhanji said, noting that in addition to various development-related complexities, sales on the project’s nearly 1,000 units were launched in 2007, right before the economic downturn.

“It’s incredible it turned out like this,” he said. “But it shows what this company is about: taking some risks, pushing design boundaries, and ultimately creating a unique fabric for the city.”

Canderel is further strengthening that fabric with YC Condos, a 66-storey building under construction up the street at Yonge and Grenville. And in its hometown, Montreal, the firm is partnering with Cadillac Fairview and Fonds immobilier de solidarité FTQ and the Montreal Canadiens Hockey Club on phase two of Tour des Canadiens, the residential component of Quad Windsor, a $2-billion mixed-use project that will spur the rejuvenation of downtown Montreal, much like Canderel’s done at College Park.

“Aura has put Toronto on the map,” said Dhanji, noting that other developers have been following suit, making major improvements along the city’s main street.

“Yonge was neglected for so long, but now with all these buildings and more people living downtown, it can finally be our Fifth Avenue.”