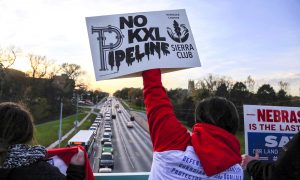 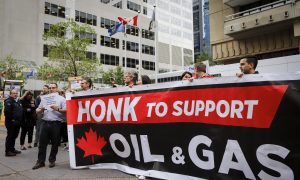 Pipeline pipes are loaded onto a truck at a Trans Mountain facility near Hope, B.C., on Aug. 22, 2019. (The Canadian Press/Jonathan Hayward)
Canada

Sweeping regulatory changes give US and China an edge on Canadian oil and gas, say experts
By Shane Miller
Print

Canada’s oil and gas industry is struggling under new regulations that could see the sector decline even as the United States and China expand their own resource industries, experts warn.

The economic downturn brought on by COVID-19 has raised the stakes amid a new regulatory environment that includes more challenging environmental reviews under Bill C-69, which implemented the Impact Assessment Act last summer and expanded the review process for projects ranging from pipelines and ports to mine expansions.

Jack Mintz, an economist and the president’s fellow of the School of Public Policy at the University of Calgary, says Canada’s resource sector is seeing some bright spots, including the completion of some pipeline projects, but the regulatory challenge is significant.

“The bigger issue is investment, and how these regulations might make people think it’s better to go elsewhere as they’re dissuaded from seeing Canada as a good place for [investment].”

A recent report on China’s carbon emissions notes that a 25 percent emissions drop due to the lockdown measures rebounded heavily in May as economic activity resumed—largely powered by coal.

“The biggest drivers of the overall increase in CO2 emissions in May were 9 percent increases in thermal power generation and in cement output,” the CarbonBrief report concluded.

With increases in investment in power generation and approvals for new coal power plants, the report forecasts that the power sector could be a big area for Chinese investment after COVID-19.

The Canada Pension Plan Investment Board invests in Chinese coal companies. The board has around $40 million of shares in China Shenhua Energy Co. Ltd., and millions in other coal companies in China.

Mintz said Canada’s focus on reducing domestic emissions will put it at a disadvantage with China.

“If we ended up killing our own oil and gas industries, we might trim down emissions while China is still using coal plants. So why shoot ourselves in the foot? What are we actually doing here?” he says.

“We could have an industry that’s competitive because of the oil reserves. Canada can be part of that, but Bill C-69 makes it really hard to compete and complete projects.”

Bill C-69 was controversial when it passed in late 2018 but it did have one significant industry voice behind it—the Mining Association of Canada.

That support vanished in August when the federal government decided to assess a project to expand an existing steel-making coal mine in British Columbia that was under provincial review.

“We are very disheartened by the federal government’s decision on the Castle Project given the expansion fell well below the threshold to being subject to the IAA [Impact Assessment Act],” MAC president and CEO Pierre Gratton said in a released statement. “This decision certainly has the potential to lead to longer timelines at a time of unprecedented global economic uncertainty.”

The feds have said the size of the expansion and its proximity to the British Columbia-Alberta border prompted the review.

Elmira Aliakbari, the associate director of Natural Resources Studies at the Fraser Institute, says the scope of new regulations under Bill C-69 are being felt as other measures, including the federal carbon tax and coal phaseout, weaken the resource sector.

“Canada’s recent policy and regulatory changes have been particularly damaging given that deregulation and sweeping tax reforms in the United States have significantly improved the business environment in that country, particularly for the oil and gas sector,” Aliakbari said.

“What’s more, these new regulatory measures are particularly problematic given that various energy companies are now struggling to stay afloat during the COVID-19 recession.”

One key policy change was Bill C-48, which banned oil takers from much of British Columbia’s coast and blocked the end point of a pipeline to Northern B.C.’s coast that would have become a key international export route.

The federal government argued that tanker traffic would have threatened one of the last temperate rainforests left in the world.

Discussing Bill C-69 in June 2018, then-Minister of Environment and Climate Change Catherine McKenna said the bill was intended to guarantee more transparency with the review process for projects, as well as balancing negative and positive economic impacts of each decision with the goal of forging better relations with Indigenous Peoples.

Alberta’s government has criticized the bill and raised concerns about the loss of jobs in 2020, with 25,000 job losses forecasted by Alberta Central.

In July, Ottawa introduced rules enacting provisions of C-69 that require companies pursuing major resource projects to provide information at each stage of assessment on GHG emissions, as well as the impact of the project on carbon sinks, on federal emissions reduction efforts, and on global GHG emissions, mitigation measures, and climate change resilience.