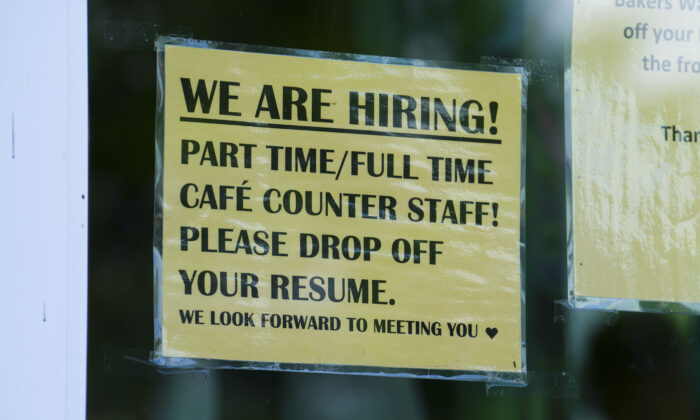 A help wanted sign is displayed in the window of a small business in Ottawa on July 12, 2022. (The Canadian Press/Sean Kilpatrick)
Economy

Canada’s unemployment rate of 4.9 percent in July is a historic low, with over a million job vacancies, but underlying the headline statistics, small business has been struggling in the pandemic recovery as job growth migrates to government and larger firms.

“It should be a concern for not just governments but all Canadians, because having a thriving, small, medium-sized business sector is what protects you from the multiplication of monopolies or oligopolies that are generally not so good for the consumers,” Simon Gaudreault, chief economist and VP of research at the Canadian Federation of Independent Business (CFIB), told The Epoch Times.

Gaudreault gives the theoretical example of how an economy is far more resilient if it has 10 100-employee firms rather than one 1,000-employee firm.

He also stressed the anchor role of small business to communities all across the country.

Thus, small businesses are fighting a losing battle in the competition to survive, thrive, and attract employees in the pandemic recovery period.

“You [small businesses] have less access to an international support network. You have simply fewer employees. So it’s harder sometimes to find all of the resources that you need to pivot in critical moments like the past two years. You’ve had many businesses that have been shuttered,” Gaudreault said.

And the government can always raise taxes to pay for its spending, Gaudreault reminds.

He pointed to the financing options larger firms have at their disposal—issuing debt or stock, whereas small business is dependent on bank loans and government handouts.

“Our economy has recovered 112 percent of the jobs that were lost during those awful first months,” Finance Minister Chrystia Freeland said in the foreword to Budget 2022 in April. Three million Canadians had lost their jobs in the early days of the pandemic, she noted.

The Bank of Canada said in its July monetary policy report that the “labour market is tight along all dimensions.”

The SME Profile report noted that about a third of all SMEs had temporary closures due to the pandemic.

As a broad example, both Gaudreault and Cross point to fewer workers returning to the downtown cores of major cities and less demand for the small service-oriented businesses that thrive on the office worker. Sectors like hospitality and tourism have been particularly affected by the pandemic and changing consumer spending patterns.

And in terms of those job losses, the vast majority hit small businesses—740,800 compared with 68,700 among medium-sized businesses, based on another ISED report Key Small Business Statistics—2021.

Hardest hit has been the self-employed. Comparing February 2022 to pre-pandemic February 2020, Statistics Canada reported that self-employment was 8.5 percent lower over that two-year span—the equivalent of 246,000 jobs.

“This suggests that the factors behind the decline in self-employment over the course of the pandemic are widespread throughout the economy and may signal a structural change in the feasibility or desirability of self-employment,” according to Stats Can.

Cross says there’s been a marked shift from self-employment to working for the government, and with good reason.

“If you were self-employed, that was really terrifying. If there was any kind of job opening in the public sector, I’m sure a lot of people were tempted to grab it, not just because the wage is higher, too, but just that there’s a job and that it’s stable.”

Cross runs his own small business and said his firm was not eligible for government support.

Many small businesses are falling into the category of zombie firms, which the Bank of Canada defines as being older and chronically unable to generate enough income to make interest payments on its loans and potentially having a bleak profit outlook.

According to the CFIB, 62 percent of small businesses have pandemic debt and 78 percent say they are still facing pandemic stress, meaning they have not fully recovered from the effects of the pandemic.

Gaudreault says that a lot of small businesses simply close down permanently without necessarily going into bankruptcy and that more pain is on the way now that the government pandemic support programs are expiring.

“All of these closures, these bankruptcies, they will happen with a lag.”

Cross said that Canada has been through an unusual recession that didn’t see the end for many small firms due to the government attempting to preserve the structure of the economy with its support programs.

“Not a lot of firms have gone bankrupt, especially the big ones. So we haven’t had the normal creative destruction,” he said, adding that he expects a lot more pain for firms if their businesses don’t start operating at pre-pandemic levels.

The CFIB reports that 54 percent of the firms it surveyed are still reporting less than normal revenues.