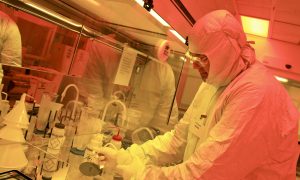 Challenged by China, US Steps Up Drive for Quantum Technology
0 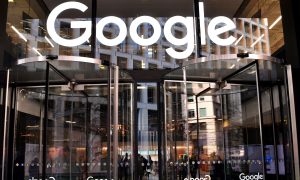 Google Achieves ‘Quantum Supremacy’ That Will Soon Break All Encryptions
0 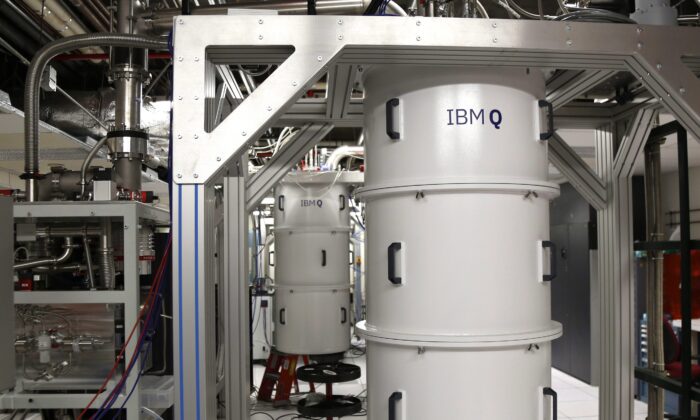 A quantum computer, encased in a refrigerator that keeps the temperature close to absolute zero in the quantum computing lab at the IBM Thomas J. Watson Research Center in Yorktown Heights, N.Y. on Feb. 27, 2018. (AP Photo/Seth Wenig)
Canada

Quantum supremacy. It sounds like science fiction, but the quest to attain it is very real. It represents the point at which a quantum computer overtakes the fastest traditional supercomputer.

And the United States and China are competing over it.

Quantum computers are not restricted by zeros and ones—the states that the most basic building blocks of typical computers use. The quantum bit, or qubit, can represent multiple combinations of zeros and ones all at once and can thus crunch through a vast number of potential outcomes simultaneously.

This exponentially faster computing power has numerous applications, including in the military, from ultra accurate weather prediction to weapons-guidance systems.

Canada and the democratic alliance must not be complacent and allow leadership in quantum to slip through their fingers, said Michele Mosca, co-founder of the Institute for Quantum Computing at the University of Waterloo.

Mosca and three other experts were participating in a webinar on quantum supremacy hosted by the Ottawa-based Conference of Defence Associations Institute on July 10.

He said a “use it or lose it” mentality is what is needed; Canada has to be proactive—it can’t wait until a potential catastrophe is knocking on the door.

Cybersecurity expert James Lewis praised Canada’s contribution to quantum and said the thrust should be to forge research partnerships between democratic countries for military purposes.

The senior vice-president and director in the technology policy program at the Centre for Strategic and International Studies in Washington, D.C. recounted a chat he had with a Chinese firm at an internet conference in China. Their attitude, he said, is not to worry about the potential problems of a technology, but instead to make the most of its opportunities.

“Quantum is the latest in a series of developments on using computers to gain military and strategic advantage,” Lewis said.

China aims to be a technology superpower. It took a big step toward ultra-secure global communications in 2016 with the launching of the first quantum satellite. Then in 2017, the satellite was used for the first quantum-encrypted virtual teleconference between Beijing and Vienna, Austria.

History has shown that technology can drive the military and military needs can spur technological advances. Quantum computing is one example of that next innovation with military applications, like gunpowder and bronze once were.

The ease with which quantum computers could decrypt puts our privacy, military operations, critical infrastructure, etc. at risk. What follows is that quantum computing would be the key to truly unhackable communication.

“Much of geopolitical competition between the United States and China is taking place in this information domain, and these critical emerging technologies which include quantum computing and quantum information science are fundamentally about our ability to process, access, and harness information for national power,” said Lindsay Gorman, fellow for Emerging Technology at the Alliance for Securing Democracy, German Marshall Fund of the United States.

Challenged by China, US Steps Up Drive for Quantum Technology

Google Achieves ‘Quantum Supremacy’ That Will Soon Break All Encryptions

Disabling another country’s communication system would be an act of war but it would not be in China’s best interest to do that right now, Gorman said.

“What is in their interest and what we’ve seen over the last two decades, is this more subtle drip, drip, grab of intellectual property that degrades our innovation potential in a way that is much more subtle and more reflective of the new ways of war,” she said.

China is using the U.N. Sustainable Development Agenda to advance its own technology agenda, Gorman said. By doing this, it can provide advanced technologies to the developing world.

“But with it comes a framework of surveillance and the information environment and control that may help push those countries in a direction of authoritarianism,” she said.

The experts at the webinar argued that commercializing the investments made in quantum is needed to keep China at bay.

“Very often, China has been extraordinarily strong at forming research partnerships and commercializing the technology that comes out of that,” Gorman said.

China has made up a lot of ground and may soon pass the United States and so the onus falls back on Canada and the alliance of democracies to guide the development of quantum technologies for commercial gain, Mosca said.

“Focus on proactively aligning our future procurement needs with economic development strategies. The United States is very good at this. We need to get better at it in Canada, and if we do it it’s a double-win for us because our government and industry will be more productive,” he said.

“I think the weakest link is our lack of a real strategy for developing these technologies and tools. … I have great confidence that we can be great leaders in the positive of applications of quantum computing, but I do think we need to step up our game and acknowledge this isn’t another nice-to-have.”

“We don’t want a quantum Avro Arrow,” Mosca added, referring to the unrealized potential of Canadian ingenuity with the supersonic jet built in the 1950s.

Canada benefits from being part of democratic alliances like NATO and the Five Eyes intelligence-sharing network, whose missions are gaining in importance given the rising geopolitical tensions with China and Russia.

“I think the Five Eyes Alliance is actually a particularly great starting point for some allied cooperation on the commercialization side,” Gorman said. “Not only Canada is extremely strong in quantum information science but Australia, as well, has some of the most developed universities and actually startup ecosystems around quantum technologies.”

Interdependence is necessary as no one nation is going to be able to build a quantum system on its own, Mosca said.

“Canada is punching way above its weight,” he said about the exploratory or undirected work on quantum, but to be better at commercialization—this is where Canada can learn from the United States.

Don’t Wait for a Crisis

If the current encryption scheme was broken tomorrow, the digital economy would be in serious jeopardy. Mosca said COVID-19 has shown that policy-makers are not proactive against emerging threats—only in the presence of a crisis do they react.

He adds that now is the time to become “agile” and more resilient.

“Complacency is another thing we need to acknowledge. It’s just baked into human nature, so we need to proactively find ways to uproot it and build a better future,” he said. Part of that objective involves creating a stronger encryption framework.

As with any landmark technology, whether it be artificial intelligence or quantum computing, practitioners in the field admit there is a need to balance further development with an obligation to mitigate any risks of untoward uses.

Quantum computing won’t be deployable for some time as it requires extremely low temperatures to operate. But quantum computing via the cloud appears to have some promise.

It’s a bit like the Wild West now as the world is just scratching the surface of what quantum can do, but grand designs are already being made. The United States with its democratic allies are in competition with China, and Canada is a vital player in this contest.