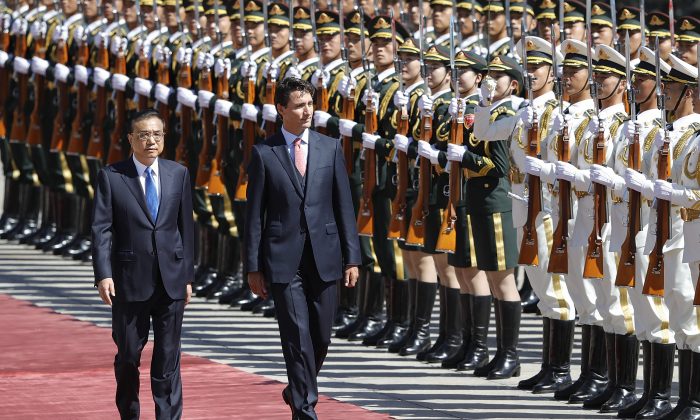 Canada’s Pursuit of Free Trade with a State-Run Economy

As Trudeau heads to China, opposition parties and Canadians warn of the pitfalls of a free trade deal with Beijing
By Omid Ghoreishi

Prime Minister Justin Trudeau is off to China again on Dec. 3, making his second official trip to the Asian giant since taking the helm as PM. On the agenda are trade and tourism, and a commitment to raise issues like human rights and the rule of law.

While the official statement by the Prime Minister’s Office doesn’t explicitly mention free trade talks, a Liberal MP The Epoch Times spoke with last week confirmed that such talks are on the agenda.

Since soon after the Liberals won the 2015 federal election, there has been talk of a possible free trade deal between the two countries. And earlier this year the Chinese ambassador to Canada, Lu Shaye, made it clear that Beijing wants China’s state-owned enterprises (SOEs) to have unfettered access to the Canadian economy, including the ability to buy Canadian companies without having Ottawa cite national security concerns. Lu also said Beijing wishes to keep human rights out of any negotiations.

Meanwhile, China has already been allowed a couple of high-profile Canadian takeovers—namely, the satellite communications firm Norsat International and the high-tech firm ITF Technologies—despite warnings from security and intelligence circles and even our neighbour to the south.

Ahead of this trip, however, Trudeau will have a clearer picture of where Canadians stand on free trade with China thanks to the recent release of the results of the government’s public consultations on the issue.

Among the concerns cited by stakeholders were the inconsistent rule of law in China, skepticism that Beijing would live up to any trade agreements, competition from Chinese SOEs, and the impact on Canadian jobs and resources; and the businesses aren’t so sure that a free trade agreement would resolve these fundamental issues.

While some in certain sectors such as farming and forestry like the idea of better access to the Chinese market, many in various business sectors, civil society groups, academia, and private citizens cited the challenges inherent in such a deal.

“Many stakeholders highlighted the complex nature of the Chinese market, with its state-run economy and the prominence of its SOEs,” reads a summarized report on the consultations. Some also expressed that “increased engagement with China could lead Canada to compromise on its values.”

Polls have shown the majority of Canadians aren’t sure a free trade deal would be in Canada’s best interests. Annual polls by Angus Reid have in fact shown that interest among Canadians for developing closer trade ties with China has been in decline since the research company first began its periodic polling on the subject in 2014. The pollster’s September survey shows that even among the Liberals’ own support base, i.e. those who voted Liberal in the 2015 federal election, support for a free trade deal is less than two in five.

A more recent poll by UBC’s Institute for Asian Research (IAR) claimed to show higher support for free trade with China, displaying a discrepancy with previous polls. However, The Financial Post’s Kevin Libin showed how the IAR poll used “unconventional methods” and how the academic behind the poll is on record as favouring closer ties between Canada and China.

Citing the ambiguity in the PMO’s announcement about whether free trade talks will be part of Trudeau’s agenda while in China, the NDP raised concerns about “yet unanswered” questions regarding such an agreement.

“China has no free press, torture is widespread, workers do not have a right to collective bargaining, and hundreds of human rights defenders and dissidents have been detained,” Tracey Ramsey, NDP critic for international trade, said in a statement.

China’s record on currency manipulation and unfair trade practices; its not having a market economy, which would mean an unlevel playing field for other players; and the lack of protection for intellectual property are just a few of the concerns raised by Ramsey.

“Before making a decision on whether to begin formal negotiations, the government needs to clearly address all these concerns, and consult with Canadians before rushing into a deal that is against their interests,” she said.

Conservative leader Andrew Scheer has also been clear that he’s not in favour of a free trade agreement with China.

“Not every country shares Canada’s commitment to a free market economy, protections for workers and the environment, protection of intellectual property, and transparent governance,” he wrote in an op-ed earlier this year. “This is why Conservatives oppose Justin Trudeau’s rush to sign a bilateral free trade agreement with the People’s Republic of China.”

Clive Ansley, a British Columbia lawyer who practised law in China for over a dozen years, knows all too well how the legal system works in the communist country.

“The whole system is so incredibly corrupt and so totally politically controlled that there is no legitimate court system,” he said in a phone interview.

This would potentially leave any Canadian operating in China without a fair legal system to resort to if encountering unfair practices. In the worst case scenario, Canadians may even be vulnerable to arbitrary detention and incarceration.

That’s the situation for Sun Qian, a Canadian citizen and successful businesswoman who is currently being detained, against China’s own laws, for her belief in Falun Dafa, also called Falun Gong, a spiritual meditation practice being persecuted by the communist regime.

“The courts in China are simply low-level administrative organs of the Chinese Communist Party, and they take their orders directly from the Chinese party-state,” Ansley said.

Canadian husband-and-wife winery owners John Chang and Allison Lu of Lulu Island Winery in B.C. faced their own troubles with the Chinese legal system when they were arrested last year over a customs issue. While not knowing the specific details of the case, Ansley said he has a “great deal of skepticism” regarding charges brought by China’s legal system against anyone “because it’s all politically controlled.”

As for making human rights part of free trade negotiations, Ansley said it’s not likely to happen in any deal with China.

“Any time there is a clash between human rights and trade, trade trumps every single time,” he said.

“At a time when we’re looking at the continuing perpetration of the greatest crime against humanity since the Third Reich, since the days of the Nazis in Germany, with the organ pillaging [from Falun Gong prisoners of conscience] in China, and it’s totally ignored by Western governments simply because they’re too timid to speak out about small things like mass murder for organs, or genocide, or crimes against humanity.

“Those are all relatively minor issues to our Canadian government, and Western governments, in general, to be fair, and all of that takes a back seat. As a matter of fact, it almost escapes mention. There is no question that the governments know about it.”

China’s candid requests about having unfettered access to buying key Canadian companies beg the question whether Beijing would ever allow the opposite to happen.

“There’s absolutely no way that would happen,” Ansley said. “The Chinese government virtually never abides by their agreements. They get the privileges in Canada. … There will be special discriminatory laws introduced to ensure that foreign companies [in China] are never allowed into certain sectors.”

There are tens of thousands of Taiwanese who conducted business in China who have been taken advantage of by Party officials or local business people with high-level connections—despite China and Taiwan having an investment protection agreement in place. Their ordeals are chronicled in the 2013 book “Taiwanese Businessmen Escape,” championed by Kao Wei-Pang, director of the Taiwanese Victims of Investment in China Association. The book tells the stories of only a small fraction of the 28,000 such cases recorded up until then.

Kao, a Taiwanese who did his post-graduate studies at Canadian and American universities and taught for two years at Montreal’s Vanier College, went on to become a successful businessman. However, after making a large investment in China in 1997, he lost a fortune when his firm was taken over by his well-connected vice general manager backed by local officials and the courts.

“The way they take away your assets is so surprising. They can do anything, even things beyond your imagination,” Tong Wenxun, a Taiwanese human rights lawyer, said in a previous interview with The Epoch Times sister media NTD Television.

According to the Prime Minister’s Office, Trudeau will travel to China from Dec. 3 to Dec. 7, making a stop in Beijing to meet with Chinese Premier Li Keqiang and Chinese leader Xi Jinping, and then visiting Guangzhou to meet with Li Xi, Party secretary of the Guangdong Provincial Committee of the Chinese Communist Party.