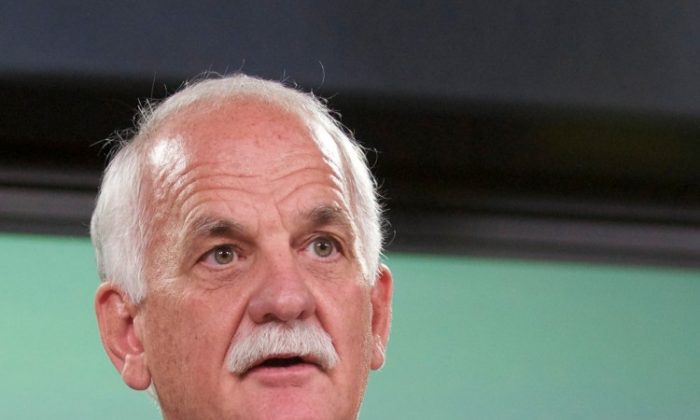 OTTAWA—Public Safety Minister Vic Toews has faced a rash of attacks from the hacktivist group Anonymous and an unnamed Twitter user in retaliation against a proposed e-security bill that would increase police powers for online surveillance and force Internet service providers to disclose personal information without a warrant.

“We warned you not to force your abhorrent spying legislation onto the Canadian people. You did not heed our warnings, now you will be exposed for the hypocrite that you are,” says one of the videos posted by Anonymous.

The computerized voice in the video comes from a headless suited man, the symbol of Anonymous, standing before a red United Nations-style symbol with a Canadian flag.

Another video warns Toews that he will end up jobless and despised if he continues pushing the legislation forward.

The Protecting Children from Internet Predators Act would give police powers to compel ISPs to disclose some web-user information, including names, addresses, phone numbers, and IP addresses without a warrant.

That information can currently be shared without a warrant, but only if the ISP is willing. The act would also require ISPs to store detailed logs of user activity for up to 90 days, such as emails and web-surfing activity, accessible by police with a warrant.

A grandiose monologue in one of the Anonymous videos describes Toews as a tyrant and threatens to expose any skeletons in his closet.

The Vikileaks30 twitter account created in response to the bill disclosed details of Toews’ previous marriage and divorce, but it closed down after concerted efforts tried to uncover the person behind the account.

The Ottawa Citizen traced the Twitter account to an IP address inside the House of Commons—the same IP address associated with edits made in Wikipedia that were clearly pro-NDP.

The Citizen’s revelations led the government to blame opposition parties for being behind the attack.

Toews sent a letter to House Speaker Andrew Scheer asking him to “expeditiously undertake and investigation” into who was sending the tweets.

Toews also wrote to his constituents blaming the tweets on “political opponents,” adding that the leaks included criminal acts that had been referred to police.

“I will be fully accountable for any responsibility that I bear for the breakdown of my previous marriage but that accountability is not something I owe to the public generally or to my political opponents in particular,” he wrote.

Sgt. Greg Cox at RCMP National Headquarters in Ottawa said Tuesday that the RCMP does not normally give out details of whom or what it is investigating.

“All we are saying at this point is that we are in receipt of a referral on the matter,” said Cox.

Last week when the bill was introduced, NDP leader, Nycole Turmel lambasted it, calling it nonsensical, illogical, and hypocritical.

The bill is now being fast-tracked for review by a parliamentary committee, a move the government says shows its willingness to consider amendments.

“Our objective here is to provide the necessary tools for police to be able to do what they used to do with old technology, with new technology, while at the same time ensuring that individuals’ privacy rights are protected,” Government House Leader Peter Van Loan said last week.

Michael Geist, Canada Research chair in Internet and e-commerce law at the University of Ottawa, said on his blog that the bill has many problems, but none that are impossible to fix.

“Mandatory disclosure isn’t the only issue with the bill—the oversight of surveillance capabilities remains underdeveloped, the costs associated with surveillance equipment is a giant question mark, and the fears of surveillance misuse based on the experience in other jurisdictions continues to cause concern,” wrote Geist.

But for these and other problems to be addressed, the government needs to restrain itself from using “inflammatory us vs. them rhetoric,” Geist said.

Toews took criticism for comments made last Monday when he told Liberal MP Francis Scarpaleggia that he could “either stand with us or with the child pornographers,” suggesting critics of the bill were siding with child pornographers.

Toews later backed away from his statement but did not apologize.

Police departments have come out in support of the bill, though their arguments are challenged by critics like open-government advocate David Eaves.

An official at Public Safety Canada told the CBC that the bill would cost around $20 million a year for the first four years and $6.7 million a year there after.