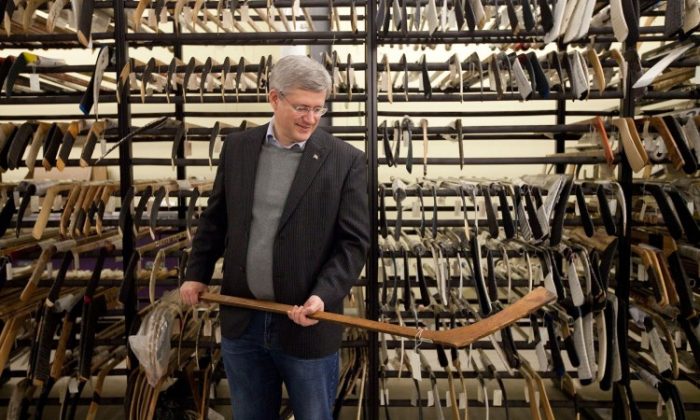 Prime Minister Stephen Harper holds a hockey stick from the 1907 Stanley Cup final during a research visit to the Hockey Hall of Fame in Toronto in December 2011. (Simon and Schuster Canada)
US

Canada’s PM to Publish Book on History of Hockey

Prime Minister Stephen Harper, an avid hockey fan, has written a book about the origins of the game that will be published in Canada and the U.S. in November.

The book covers hockey at the turn of the twentieth century, the early quests for the Stanley Cup, and the rise of professional hockey, according to a press release from Simon & Schuster, publisher of the as yet untitled book.

“Canadians from all walks of life enjoy cheering on the great heroes of our national game, but it wasn’t always that way,” Harper said in the release.

“The early days of professional hockey featured outsized personalities who fought pitched battles to shape the game we know and love today. Writing this book has taught me a lot about hockey and a great deal more about Canada. I hope all who read the book enjoy it as much as I enjoyed the experience of writing it.”

All author royalties from the book will be donated to the Military Families Fund, which provides emergency financial assistance to military families faced with unforeseen and often immediate needs that have resulted due to conditions of service.

Award-winning journalist Roy MacGregor, who covers hockey for the Globe and Mail, provided editorial services to Harper in writing the book.