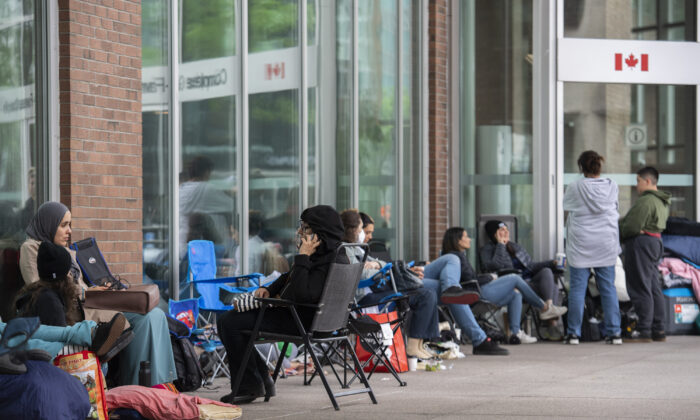 People line up outside the Guy Favreau federal building while waiting to apply for a passport in Montreal on June 21, 2022. (Graham Hughes/The Canadian Press)
Canada

The records, obtained by Blacklock’s Reporter, also noted that more than a tenth of passport officers (11 percent) continued to work from home as late as this past summer.

According to data in the records, the passport office had a total of 831 staff stationed at public service centres on March 1, 2020. However, as of Jan. 1 this year, staff level was down by 9 percent, leaving only 757 employees manning the counters. The federal agency did not reach pre-pandemic staffing levels until this past May.

“The number of full-time equivalent employees working in passport offices has fluctuated,” the cabinet wrote in an “Inquiry Of Ministry” presented in the Commons. According to Blacklock’s Reporter, the Inquiry data was requested by Conservative MP Dan Albas, who represents the riding of Central Okanagan–Similkameen–Nicola in British Columbia.

A June 23 briefing note by the passport office indicated that the agency was well aware that there would be an increased demand for its service since last summer.

To date, the Liberal government has not explained why it failed to tackle the increased demand for passports, which resulted in wait times that stretch up to six hours for walk-in service or a three-month wait list for mailed applications.

The Inquiry data disclosed that in January, the Winnipeg passport office cut in-person staff by 13 percent since the outbreak of the pandemic in March 2020. Vancouver and Toronto fell by 17 percent and 28 percent respectively, while Regina slashed 31 percent, and Edmonton with the largest cut at 59 percent.

Staff reduction during the pandemic caused the monthly processing number of travel documents to fall as low as 2,100 in May 2020, compared to 229,392 in the pre-pandemic period in January 2020, according to the Inquiry data. Passports issued this August totalled 240,980.

“We will continue to make our services more accessible for all Canadians,” she said.