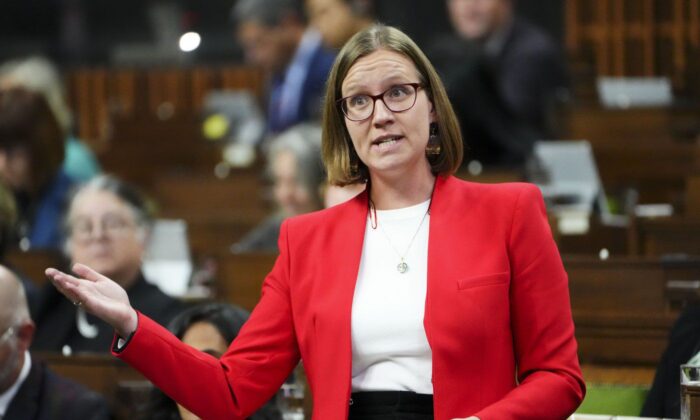 Families, Children and Social Development Minister Karina Gould stands during question period in the House of Commons on Parliament Hill in Ottawa, on Oct. 17, 2022. (The Canadian Press/Sean Kilpatrick)
By Peter Wilson

Service Canada has “virtually eliminated” the passport application backlog, which peaked at over 250,000 applications in August 2022, says Minister of Families, Children and Social Development Karina Gould.

Most of the new passport applications causing the backlog were being processed on time as early as October, but thousands of other applicants who had applied beforehand were still experiencing lengthy delays.

Gould said on Jan. 24 from the Liberal cabinet’s retreat in Hamilton, Ont., that 98 percent of those applications have now been processed.

The minister added that she expects another wave of passport applications to occur in the next few years because the first Canadian passports issued with 10-year expiry dates will be due for renewal come July 2023.

Between August and April 2022, about 1.1 million applications for both new and renewed passports were filed as a result of pandemic restrictions loosening, causing more Canadians to resume travel.

As of early August 2022, over 25 percent of those 1.1 million applications had not been processed.

Gould said at the time that the federal government had failed to accurately predict the large spike in passport applications that occurred after pandemic travelling restrictions were dropped.

Public Safety Minister Marco Mendicino said earlier this month that the Nexus backlog was between 220,000 to 240,000 applications long.

“We hope to reduce and dramatically eradicate that backlog,” he said on Jan. 10.

On the same day, the Canada Border Services Agency (CBSA) and U.S. Department of Homeland Security announced they would be offering extended hours and introducing more interview options for Nexus applicants in order to address what it called the “significant backlog.”

CBSA added in a joint statement on Jan. 10 that Nexus approvals have been accelerated for about 80 percent of applicants and that it has processed a combined 203,000 enrollments along with U.S. Customs and Border Protection since October 2022.