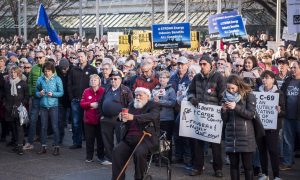 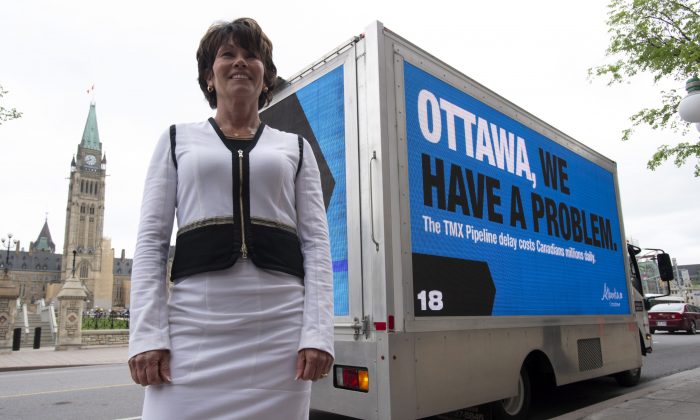 Alberta Energy Minister Sonya Savage stands in front of a billboard vehicle showing a campaign the Alberta government is undertaking in Ottawa on May 29, 2019. (The Canadian Press/Adrian Wyld)
Companies

Canada’s oil and gas industry has been in a slump for about five years now. Oversupply in the oilsands arose quickly due to technological advances, and a complex and lengthy adjustment is underway to reach a better balance of supply and demand.

The industry and government are grappling with technological disruption, similar to a number of other sectors like retail and newspapers. Issues such as having a favourable outcome in the October federal election, building pipelines, imposing production cuts, and fighting onerous regulation are all critical to reaching that new equilibrium sooner rather than later. But they are all akin to treating the symptoms of oversupply given that the “problem” of holistic adaptation to new technologies is not something that can be treated.

“The industry is undergoing some of the biggest changes technologically and structurally in 100 years, and this is even independent of the climate change, political, and regulatory issues—independent of all that,” said Peter Tertzakian, executive director of the ARC Energy Research Institute in Calgary.

“Everything is undergoing structural and radical change, so why would we think that oil and gas is exempt?” he added.

It really began less than 10 years ago, when oilsands operations in Canada and fracking in the United States started delivering dramatic amounts of new oil. The supply-demand equilibrium has been turned on its head in a relatively short period of time. Oilsands production has doubled in the past decade to 3 million barrels a day.

This puts into context the aforementioned industry and government initiatives. But the lack of political leadership on pipelines is the biggest hindrance, and it’s only lengthening the adjustment period.

Pipelines have a lot of supply to catch up on, and technological change waits for no one.

“The better the industry gets at being more productive—better by virtue of technology—the greater the propensity to be able to fill the next pipeline,” Tertzakian said.

Canada’s business climate is less competitive than that in the United States, and business investment in the oilsands has cratered. But Tertzakian says that for Canada, there is a silver lining to foreign players fleeing the oilsands.

The industry is undergoing a transformation from within.

“The Canadian consolidation of foreign assets is not a bad thing, because we’re entering a new phase in this business where learning curve effects are kicking in and costs are coming down,” Tertzakian said. “These companies in the industry, especially on the oilsands side, are generating tremendous cash flow.”

As the industry starts to mature after years of capital investment, Canadian companies are demonstrating the ability to operate more efficiently. And if foreign players leave, Canadian firms are the ones reaping profits that would have left for foreign jurisdictions.

Companies in the oilpatch can earn significant cash flow without the need for much more reinvestment, which should be appealing to investors, he added. CNRL has become Canada’s largest oil and gas producer after recent acquisitions.

But as the big Canadian players get bigger, the smaller players can get shut out. It’s the “big box effect,” says Tertzakian, where the industry power gets concentrated among the bigger players, who have massive scale.

The industry’s and government’s predominant concern is not allowing the price of Canadian oil to fall too far below that of the U.S. benchmark West Texas Intermediate (WTI) like it did last fall. That differential currently hovers between $10 and $15 per barrel, but last fall it reached over $40.

The more that differential grows, the more money Canada loses, as its oil gets purchased at increasingly discounted prices by the United States. Greater pipeline capacity would alleviate this dilemma, but in the meantime, Alberta’s newly elected government felt it had to maintain production cuts to keep prices acceptable.

“We had to be absolutely sure that we didn’t blow out the differentials like what happened last fall,” said Alberta Energy Minister Sonya Savage in a recent interview with BNN Bloomberg.

The curtailments have been extended to Dec. 31, 2020, with possible earlier termination. Without them, production would exceed the amount that could be shipped for export by about 150,000 barrels per day.

Cognizant of the increasing strain on the smaller players during this lengthy adjustment, Alberta’s government says that only 16 of the more than 300 producers in Alberta will be subject to the new base curtailment it set, eased from 10,000 barrels per day to 20,000. This will allow smaller producers to increase investment and production without meaningfully affecting total provincial output.

A second-order effect of the curtailments is that it may discourage oil companies from seeking new deposits and investing to increase productive capacity in the near term. That would be another blow to Canada’s economy and productivity.

The oil and gas sector is crucial for improving Canada’s productivity, as extraction produces $644 in GDP per working hour, wrote Jack Mintz, president’s fellow at the University of Calgary’s School of Public Policy, in a Financial Post op-ed. That’s more productive than the mining, telecommunications, utilities, and real estate sectors. Canada’s highest incomes come from capital-intensive sectors like oil and gas.

Savage said the provincial government is continuing to fight back against federal policies like Bill C-69, which makes it harder to build pipelines, and Bill C-48, which bans oil tankers.

“I don’t think the federal government—the existing federal Trudeau government—is fully attuned to the competitiveness problem that they have created,” she said, hoping for a “better result” on Oct. 21.

Alberta has also established a $10 million litigation fund for pro-development Indigenous groups, to support their efforts to deal with environmentalists who step in to oppose projects.

Oil and gas companies say that their industry is highly innovative and has made significant strides in reducing emissions. They see a greater role for their product in international markets by satisfying demand that’s being supplied by oil produced less cleanly than what they can do in the oilsands.

“This is a high-tech business and people don’t think that,” Laut said, noting that technology isn’t just being used to get more oil out of the ground faster. He said CNRL is capturing carbon and making other products with it, like soap.

“It’s a chemistry problem that can be solved,” Laut said.

The Conference Board of Canada forecasted that Alberta’s economy will shrink by 0.8 percent this year due to the mandated production cuts and big drops in capital investment. Oil is one-fifth of Canada’s exports.

Alberta’s unemployment rate used to be 5 percent lower than the national average just over 5 years ago, but now it is 1 percent higher.

The oil and gas industry is grappling with everything from environmental challenges to competitive pressures in the market. The success of a better balance between supply and demand in the near future in an era of unprecedented technological transformation will require greater cooperation from the federal government on pipelines and regulation. Until then, some stop-gap measures like curtailments, which represent the lesser of two evils, are necessary.