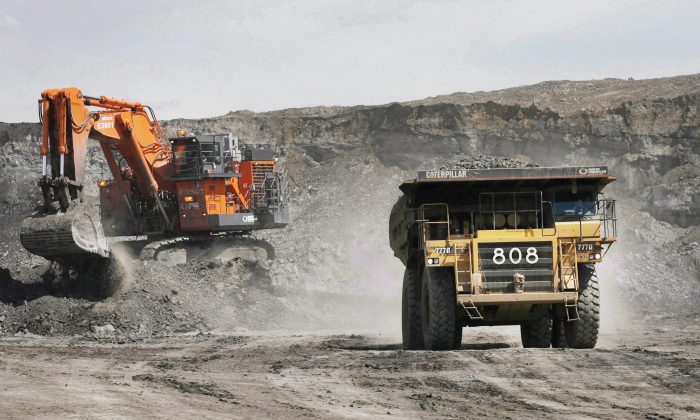 A haul truck carrying a full load drives away from a mining shovel at the Shell Albian Sands oil sands mine near Fort McMurray, Alta., on July 9, 2008. (The Canadian Press/Jeff McIntosh)
Business & Markets

Canada’s mining industry is slimming down for the next uptick in demand, according to a report published Wednesday, Feb. 4, by the Mining Association of Canada (MAC).

The organization’s 2014 Facts and Figures report notes that the sector is accustomed to downturns in the global market, but MAC’s president says companies are reducing costs and improving productivity.

“We are confident about the future demand for our products and the Canadian mining industry is focusing on getting in shape now to seize the growth opportunities ahead of it,” said MAC’s president and CEO Pierre Gratton in a news release.

But there are signs the sector has lost ground, with exploration investment down by 41 percent in 2013 to $2.3 billion, with a further drop to $2.1 billion expected to have been spent in 2014. That’s getting close to the low of $1.9 billion seen in the 2009 global recession.

That drop shifts Canada from its top spot to second place as the country for the most exploration spending in the world. Australia has since moved to first place.

According to the report, the main issues facing the sector this year are a shaky global economic outlook with softening growth in China, poor infrastructure in northern regions which makes it hard to develop projects there, and complex regulations with overlapping environmental assessments.

To address those issues, MAC wants the federal government to keep signing trade and investment deals to assist the sector in the future, as well as help spur investment in critical infrastructure to enable mine development in the North.

The report also calls for a regulatory regime that eliminates federal/provincial overlap and brings together various agencies, as well as Aboriginal and public considerations, and integrates them “into a unified, robust and timely process with meaningful consultation.”