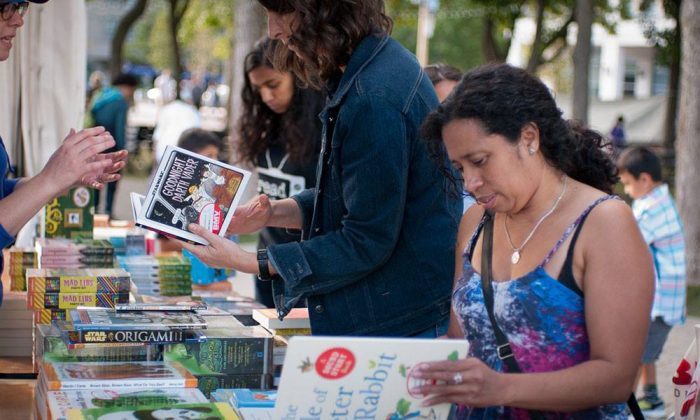 A woman stops by one of the hundred of exhibitors' booths at The Word on the Street Toronto, 2015 (Kent Robinson).
Arts & Culture

TORONTO—The Word On The Street, Canada’s largest annual book and magazine festival, returns this year with a newfound confidence in the literary word.

Toronto, the flagship festival, is celebrating 27 years at its latest location at Harbourfront Centre on Sept. 25.

“The Word On The Street is certainly a unique event on a global scale and has emerged as one of the most important driving forces in Canada’s publishing market,” says Justin Lauzon, the festival’s marketing and communications coordinator.

Lauzon notes that the festival has become “one of the largest literary celebrations in the world,” with more than 450 programmed events featuring 650 authors, workshop presenters, and arts performers, as well as over 600 book and magazine exhibitors in 2015 alone.

With multiple events running across the country in late September, the festival is scheduled to coincide with the fall lineup for Canadian publishers—the busiest period of the season and a time to hold events and readings, and issue new releases.

“The festival staff keeps their ears to the ground and their eyeballs on the bookstore to try to predict new and interesting developments in Canadian publishing,” says Lauzon.

Currently, some of these trends include thrillers along the lines of “Gone Girl” and “Girl on the Train,” as well as genre fiction—science fiction, horror, comics. Baseball is also a hot topic this season and the festival is setting up talks with some of baseball’s best writers, says Lauzon.

The Word On The Street is successful on many fronts, says Lauzon.

“Publishing houses and authors alike see the festival as a great forum for connecting writers with their audiences while shining a spotlight on the amazing breadth of literary talent in Canada.”

In particular, he notes that the festival is key for smaller independent presses to connect their authors with the readers.

“The Word On The Street is also known for its track record of helping launch emerging authors, such as Tish Cohen, Joseph Boyden, Leah McLaren, and Stephen Marche. Our organization prides itself on providing opportunities for first-time authors to showcase their work to our dedicated community of book lovers,” he says.

The festival works hard to make literature accessible to everyone by offering the events at no cost, explains Lauzon. The public returns this appreciation—over 250,000 attended last year alone.

Since its Toronto launch in 1990, Word On The Street has hosted festivals across the country, including in Ottawa, Calgary, and Kitchener-Waterloo. Vancouver was also part of the umbrella charity The Word On The Street until 2012, when it was rebranded as Word Vancouver. This year, the Vancouver festival takes place Sept. 21-25.

Word On The Street is currently hosting festivals in Halifax, Saskatoon, Lethbridge, and Toronto that range from Sept.17-25.

According to Lauzon, the trends are looking up for the publishing industry, which has seen traditional book sales increase in 2015, surprising many people. This has been attributed to the success of the thriller “The Girl on the Train,” as well as the sudden growth of adult colouring books.

However, he believes there is an increasing trend in book sales in Canada in general, echoing a similar one in the U.S., which saw increased sales in print book purchases by those aged 22-34, according to a report by Nielsen Books and Consumers.

Lauzon admits he is optimistic about the future of books.  “When you see the thousands of people who come out to The Word On The Street each year, you get a very concrete visual of that trend,” he says.