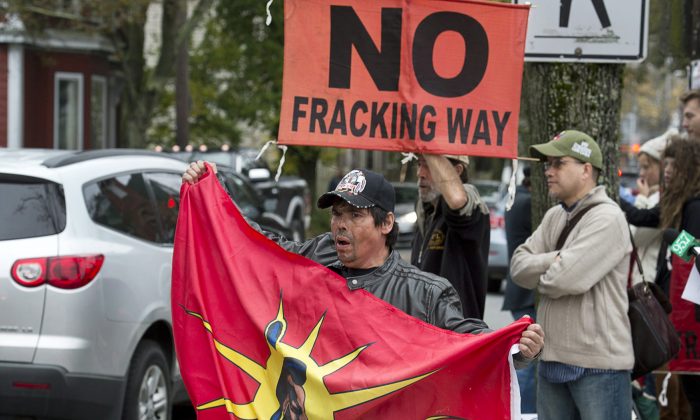 Demonstrators rally in Halifax on Oct.18, 2013, against possible plans to proceed with shale gas development in eastern New Brunswick. Energy union Unifor is calling for a national moratorium on fracking given the wide-ranging health and environmental concerns around the technology. (The Canadian Press/Andrew Vaughan)
Canada

One of Canada’s largest unions is calling for a national moratorium on hydraulic fracturing or “fracking” for shale gas.

Unifor, which represents 300,000 members, is raising concerns about the safety and environmental risks associated with fracking and related First Nations land rights issues.

“Unconventional gas fracking has the potential to have catastrophic effects on our environment and economy,” said Unifor national president Jerry Dias. “Just because we can carry out this activity does not mean we should. We must enact a national moratorium on fracking activity.”

Fracking technology relies on the high-pressure injection of a mixture of water and chemicals into numerous drilled wells in order to fracture the rock deep underground and release large quantities of both crude oil and natural gas.

It has been the subject of intense protests around the world in recent years and more than 100 U.S. municipalities have now passed laws banning fracking in their jurisdictions because of concerns about water usage, groundwater contamination, and air pollution, among other issues.

In Canada, Quebec and Newfoundland and Labrador have also introduced moratoriums on fracking, and Nova Scotia has banned the practice while undertaking a review.

An anti-fracking protest near Rexton, N.B., turned violent last month when police enforced an injunction to halt the blockade of a compound where oil company SWN was preparing for fracking operations. Forty people were arrested and six police vehicles burned. The N.B. protests sparked ongoing solidarity demonstrations across the country.

Many Canadians have concerns with the potential economic, social, and environmental damage of an unregulated fracking industry, says Unifor, and now is the time for sober second thought.

“Instead of being guided by short-term swings in prices and profits for private energy producers, Canada’s federal and provincial governments must develop and implement (in cooperation with other stakeholders) a national plan for a stable, sustainable energy industry that respects our social and environmental commitments, and generates lasting wealth for all who live here,” said a statement from the union.

Unifor cites the pollution of water sources, large emissions of greenhouse gases, unpredictable impacts of pressure on rock formations (such as earthquakes), and destruction of surface land as its major concerns with fracking.

Worker safety is also an issue, says the statement, calling the conditions “haphazard,” and “gold-rush-like.”

A national moratorium should remain in place until the safety and environmental risks associated with fracking have been adequately addressed, and First Nations communities have given “full informed consent” for fracking activity on their traditional lands, says Unifor.

Last week, a coalition of environmental groups filed a court action against B.C.’s Oil and Gas Commission and energy company Encana for allegedly violating the Water Act by granting hundreds of short-term water permits to natural gas companies for fracking.

The groups claim that because the commission has allowed short-term permits to be granted repeatedly, it has led to long-term usage, with the result that up to a million litres of fresh water has been drained annually from lakes, streams, and rivers for fracking.