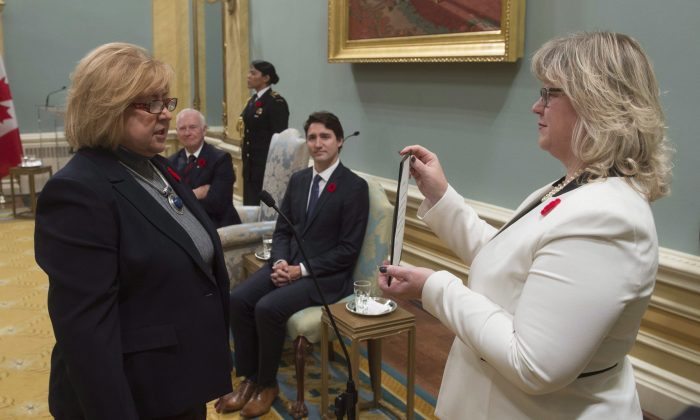 Labour Minister MaryAnn Mihychuk is sworn in at Rideau Hall on Nov.4, 2015, in Ottawa. Mihychuk is overhauling the EI system and labour code to address a growing gap between current regulations and disruptive new business models. (THE CANADIAN PRESS/Adrian Wyld)
Canada

PARLIAMENT HILL—Canada’s new labour minister is getting ready to overhaul the Employment Insurance system and the federal labour code to address a growing gap between regulations and today’s disruptive new business models.

Labour Minister MaryAnn Mihychuk said the wave of automation and other changes to how business is done have made many regulations and support systems less relevant.

“It is all part of that flexible work and the changing working environment, and it illustrates how outdated our EI support system is and our labour code. We are going through a significant review and updating of both systems so they can be more responsive,” Mihychuk told the Epoch Times.

The provinces handle most labour code regulations but the federal government delivers EI and creates labour laws for federally regulated industries like banking and radio or television.

Federal, provincial, and municipal governments have so far been unable to keep regulations current with the changes introduced by new businesses that take advantage of transformative technology.

The highest profile example has been Uber. Many cities are currently grappling with the upheaval of the taxi industry by the ride service company, resulting in court cases and pitched battles between the city, Uber, and taxi drivers who are seeing their expensive taxi licenses plummet in value.

But other industries are watching closely as emerging technology prepares to encroach on their territory. Canada’s big banks, for example, are preparing for a new era of financial technology, or fintech, as startups attract significant investment for products aimed at providing core banking services.

There are a number of huge societal changes that are impacting our workforce.
— Labour Minister MaryAnn Mihychuk

Beyond disruptive business models, there is the ongoing shift toward contract work. Mihychuk noted that many employees can no longer access employment insurance—arguably the most important safety net for workers.

“Employment insurance at this point is only covering 35 percent of working Canadians, so as we see automation coming in it is going to be a challenge to what we think of as a traditional work force,” she said.

Mihychuk predicts that many of the mechanisms in place now, including some payroll taxes paid by employers, will become less relevant.

“It is already seriously challenged. In the ’90s, employment insurance was relevant to 85 percent of the workforce. Now it is down to 36 percent,” she said.

“There are a number of huge societal changes that are impacting our workforce, and so the challenge given to us in the department is enormous but very, very timely. In fact, we should have looked at these kinds of changes a while ago.”

That trend can leave courts the job of deciding what the regulations mean and how they should apply, as was the case with Toronto’s lawsuit against Uber.

Toronto has continued to see large protests at city hall by taxi drivers who want Uber banned. However, Toronto Mayor John Tory has said that won’t happen and the city has abandoned the idea of getting an injunction against the service. In July, the city lost a legal battle to get a permanent injunction against Uber, which it argued operated as a taxi service. The judge ruled the city’s definition of a taxi service was too broad and gave the company the green light to keep servicing passengers.

Uber, echoing a call made by other new businesses, wants to see regulations changed to keep track with the times. Fintech companies have made similar requests, arguing that unclear or outdated laws and regulations can restrict innovation or scare off investors.

Ontario carried out series of consultations over the spring and summer to examine the province’s Labour Relations Act and Employment Standards Act. Those will feed into a final report due out the summer of 2016 that could recommend anything from legislative changes to education investments, according to a spokesperson with the provincial labour ministry.

The province is looking to understand better how to deal with non-standard employment, including part-time work, temporary work, and job sharing. These kinds of jobs have increased at twice the rate as standard employment since 1997.

Globalization is also changing work as employers take advantage of the Internet and permissive trade deals—deals that include provisions that allow the free trade of services—to hire workers from around the globe.

Mihychuk’s immediate focus will be EI reform that includes key changes promised in the Liberal platform, including cutting the waiting period for benefits from two weeks to one.

The Liberals pledged to adjust the system to deal with the new trend of “precarious work,” a term policymakers are using to describe contract workers and those providing services through companies like Uber or Amazon’s Mechanical Turk. Mechanical Turk lets people work odd jobs or do so-called micro-tasks that can pay a few cents for things such as writing photo captions or doing small pieces of online research like finding a phone number.

Such jobs are more familiar to new workers arriving into a job market that is shifting away from hiring long-term employees. For many new workers, precarious work is the new normal.

Mihychuk said changes to EI will be helpful to new workers and those re-entering the workforce.

Specifically, such workers are currently required to accumulate 910 hours of insurable employment before they can claim EI benefits. Mihychuk repeated Prime Minister Justin Trudeau’s pledge that the requirement would be reduced.

“One of the first things we will do is remove the penalty to young workers and people that are re-entering the workforce. Right now they have to find 910 hours and that is going to be reduced.”