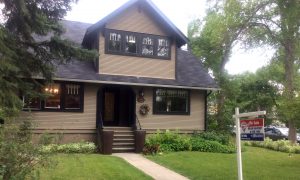 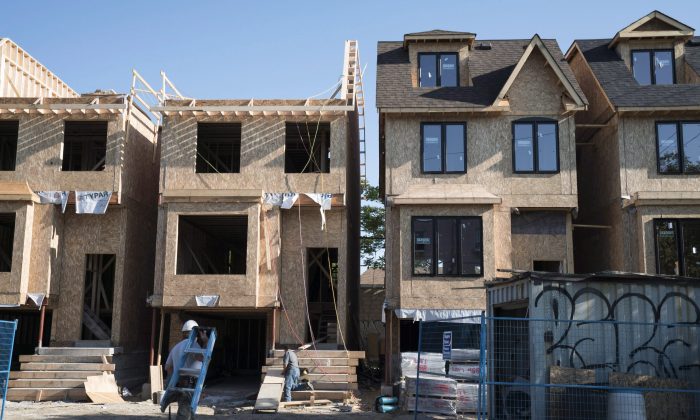 Houses under construction in Toronto on June 26, 2015. (The Canadian Press/Graeme Roy)
Business

TORONTO—Activity in Canada’s real estate market will slow “modestly” next year as interest rates begin to rise, according to a report from RBC Economics released Aug. 19.

The report pegs the risk of an outright crash in real estate as low, saying RBC expects the economy to grow and that interest rates will likely rise gradually starting next year.

However, the bank says there could be a “severe” downturn in the real estate market if employment plunges due to a deep recession or if interest rates surge dramatically.

In fact, it says the Canadian housing market is poised to post one of its best years on record despite a drop in home resale activity in the oil-sensitive provinces of Alberta and Saskatchewan.

In July, the Bank of Canada cut its overnight lending rate, which affects variable-rate mortgages and other products, by 25 basis points to 0.5 percent.

RBC predicts the central bank will raise the rate by 75 basis points to 1.25 percent in the second half of 2016.

“It has long been our view that the eventual rise in interest rates from generational low levels will produce significant headwinds for Canada’s housing sector,” the report said.

“Much of the market’s vibrancy in the past several years can be attributed to exceptionally low—and declining—interest rates.”

RBC said it expects the cooling to be moderate and controlled—for instance, home resales declining by less than 10 percent over several years and price growth slowing to a rate of 3.2 percent in 2016.

“In our opinion, the risk of a crash—resales plummeting by more than 25 percent nationwide for instance—is low for three main reasons,” the report says.

The other two reasons cited are strong immigration and the gradual pace at which interest rates will rise.

RBC says it doesn’t expect national home prices to fall outright, at least in the short term, although certain segments of certain markets—for example, condos in Montreal—could see a decrease.

The risks of a nationwide collapse in prices—such as a drop of 25 percent or more—are “quite remote,” according to the report.