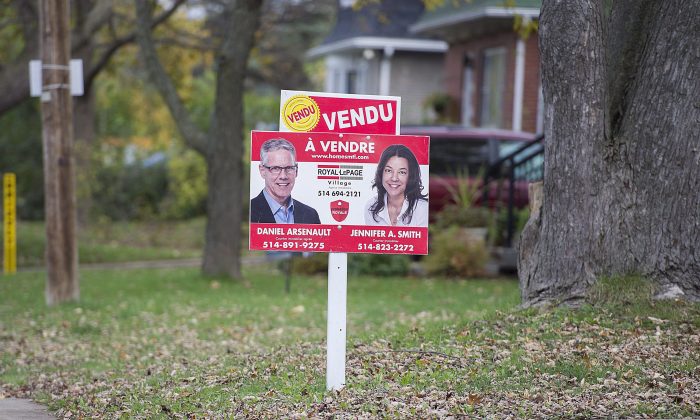 A sold sign is shown on the lawn of a residential property on the west island of Montreal in this file photo. (Graham Hughes/The Canadian Press)
Canada

The Canadian housing market has reached a “very high degree of vulnerability,” heard the House of Commons Finance Committee Friday as it met to discuss inflation and the significant increase in housing cost.

This vulnerability assessment was made by Romy Bowers, president and CEO of the Canada Mortgage and Housing Corporation (CHMC), Canada’s housing agency.

“Housing affordability is our top concern. We’ve mobilized all our resources to address it,” Bowers said.

“We’re doing this because the current trend of escalating house prices is worse than at any other time over the past 30 years. It hasn’t slowed despite the economic uncertainty of the COVID-19 pandemic. In fact, growth in house prices has accelerated over the past 18 months.”

Bowers said the problem isn’t just affecting homeowners; the rise of real estate has an impact on rent, which affects the more vulnerable.

“Some 13 percent of Canadian households are in poor housing need. This means that they’re spending more than 30 percent of their income on housing, or that they’re living in housing that is inadequate or unsuitable.”

Bowers says the housing system is complex, but it is the CHMC’s position that the main cause of the steep rise in prices is that supply is not keeping up with the population growth.

Conservative MP and finance critic Pierre Poilièvre questioned that assertion, pointing out that the pandemic led to drops in incomes, gross domestic product, and immigration, and yet house prices rose 26 percent.

The Canadian Real Estate Association reported this week its Home Price Index was up a record 26.6 percent year-over-year.

“Supply is a long term problem in Canada, but it certainly cannot explain the sudden burst in prices because of course, we didn’t lose 26 percent of our housing supply last year. So given that there were $200 billion more in house price purchases last year than in any year on modern record, where did all of that extra money come from?” Poilièvre asked.

Poilièvre was implying that the federal government has been injecting extra money into the system, therefore increasing demand and fuelling inflation.

Bowers replied that financial institutions source their funds from the capital markets.

“Would purchases of financial assets by the central bank from those financial institutions provide more cash to them to lend out?” Poilièvre rhetorically asked.

Conservative MP Adam Chambers said that the issue of supply has been talked about at length, but concerning demand, he asked Bowers if she is concerned with the proposed measures by the Liberal government to help first-time home buyers, which could “juice up the market on the demand side.”

“In a supply constrained market, you have to be very careful about about measures that impact demand. So, if CMHC is asked to provide policy advice, we would take that into consideration in providing our advice,” Bowers answered.

Another official on deck for the committee hearing was Peter Routledge, head of the Office of the Superintendent of Financial Institutions (OSFI).

NDP MP Daniel Blaikie asked Routledge if some of the hundreds of billions the government gave to the banks at the onset of the pandemic to provide mortgage relief to Canadians ended up serving that purpose or if it was used to fuel real estate investments that have contributed to the current housing crisis.

“Has there been credit provided to folks who seek to invest in housing, maybe either buy a second home or buy a home to flip? The honest answer is yes, the banks have provided credit to those homebuyers, investors,” he said, pointing to a Bank of Canada study indicating that these accounted for 22 to 23 percent of homebuyers last year.

“A more historic norm would be in the mid to high teens.”

Bloc MP Gabriel Ste-Marie asked Routledge if he foresees any risk for the financial system with the predicted interest rate hikes by the Bank of Canada this year.

The central bank will make a rate announcement on Jan. 26 and it is expected to go up to cool off inflation.

Routledge said that in recent years, banks have been qualifying borrowers at “well above prevailing contract rates. And that is a margin of safety that will help us through that period.”

“I should never be too confident or overly confident in financial stability. You want to a regulator who is always looking over the horizon to see what the risks are coming. Having said that, the margin of safety we have with the borrowers gives me great confidence,” Routledge said.

Bowers echoed those comments, saying that mortgage defaults are caused primarily by surge in unemployment. “We find that interest rate changes can have an impact, but it’s very very small relative to other factors.”