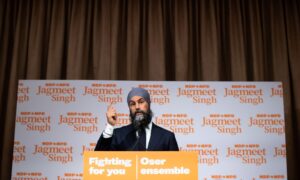 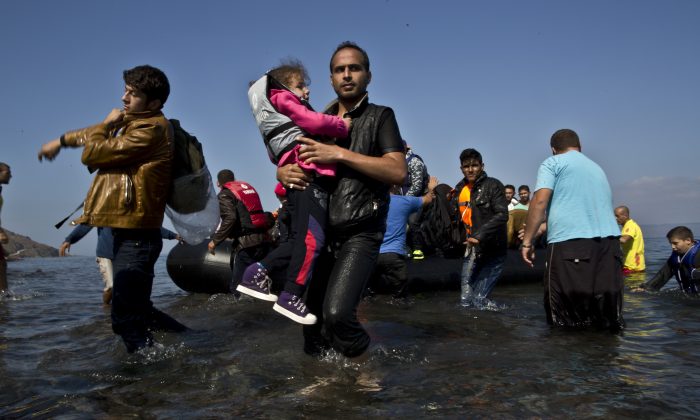 A Syrian refugee carrying his daughter rushes to the beach as he arrives on a dinghy from the Turkish coast to the northeastern Greek island of Lesbos on Oct. 4 , 2015. (AP Photo/Muhammed Muheisen)
Canada

With a population 1/10 of US, Canada accepting far more Syrians than its southern neighbour
By Omid Ghoreishi

EDMONTON, Canada—Life was going well for Samer Hamawi and his young family before the civil war broke out in Syria. Hamawi, a member of Syria’s Christian minority, had his own restaurant business in Aleppo and led a comfortable life.

Then the destructive civil war with different warring factions broke out, and things got more dire by the day. One day as he was watching the news, Hamawi (who doesn’t want to use his real name) saw the entire neighbourhood that his business was in blown to pieces by bombings.

That’s when he decided he had to get his family out of Syria. They settled in Lebanon for some time, and thanks to Canada’s new Liberal government’s goal to resettle 25,000 Syrian refugees by early 2016, made their way to Edmonton at the turn of the year.

Hamawi and his family were sponsored by a church group, as part of Canada’s refugee and humanitarian resettlement program that relies on both government-assisted and privately-sponsored streams.

In the context of North America, [Canada’s contribution] is sizeable, it is admirable.
— Jennifer Hyndman, York University

“All Canadian people are very nice,” said Hamawi in his broken English, noting how the church group has helped his family to get settled in Canada.

“A lady comes to our house, each week two days, to study English [with me],” he said, “and another lady comes to house of all Syrians, brings gifts [for] children.”

‘An example for other countries’

Although delayed by two months, the newly-elected government that took power last November delivered on its ambitious election promise to bring in 25,000 refugees (the original commitment was for the end of 2015, but was completed by the end of February 2016), and has set the goal of bringing in thousands more by the end of 2016.

“[Canada’s] contribution is a drop in the bucket, but my view would be it’s an important drop, because we’re offering permanent homes,” said Jennifer Hyndman, a professor of social science at the York University in Toronto and director of the university’s Centre for Refugee Studies. “In the context of North America, it is sizeable, it is admirable.”

The response to the refugee crisis became one of the determining issues in Canada’s election last October, particularly after heart-wrenching images of Alan Kurdi, a Syrian toddler whose body washed up on a Turkish beach, shifted the world’s attention to the humanitarian crisis in Syria.

Hyndman says the fact that Canada’s new government made an election pledge on the Syrian refugee file made it a political commitment to follow through, creating a “civil society consensus” for the plan to go ahead.

However, it is a different situation in the United States. With a population 10 times that of Canada, the U.S. has committed to taking in only an additional 10,000 Syrian refugees by the end of this year. But in the wake of the terrorist attacks in Paris last November and San Bernardino last December, more than half of the country’s governors as well as presidential candidates have spoken out against resettling Syrian refugees.

Republican presidential candidate Donald Trump, for example, has called for an outright ban of Muslims entering the United States.

Many in the United States have cast a critical eye on Canada’s refugee settlement program—and its fast pace.

“U.S. politics is more polarized than Canadian politics I would argue, and this has created a kind of wedge issue so refugees have become conflated with terrorists in the U.S.,” said Hyndman.

“They are just … ramping up for the presidential campaign with the primaries, and there is quite a different geopolitical positioning in relation to the war on terror.”

Many in the United States have cast a critical eye on Canada’s refugee settlement program—and its fast pace. A poll conducted by Ipsos for Global News, coinciding with Trudeau’s visit to Washington in March, showed that half of Americans think Canada’s Syrian refugee plan poses a security risk for the United States.

In February, the U.S. Senate Homeland Security and Governmental Affairs Committee held a hearing on Canada’s refugee plans vis-à-vis security concerns, given the fast pace of the program. Ahead of the hearing, Canada’s ambassador to Washington issued a letter to all committee members, outlining Canada’s security and screening steps to ensure no terrorists would make their way in under the program.

Concerns about security have prompted the Obama administration to also go on the defensive about its refugee resettlement plans. The government’s pledge to allow in 10,000 more refugees, on top of the 2,000 Syrian refugees who have settled in the United States since the start of the Syrian crisis, has come under fire, especially from Republicans. Earlier this year at a House of Representatives Homeland Security Committee meeting, U.S. government officials defended their security measures in regards to refugees, and late last year the State Department issued a fact sheet asserting that all refugees undergo rigorous screening.

The Trudeau government’s refugee program has faced domestic criticism as well. In the aftermath of the Paris attacks, a poll conducted by the Angus Reid Institute showed that the majority of Canadians opposed the government’s plan to take in 25,000 Syrian refugees, due to security concerns, given the tight timelines. Brad Wall, premier of Saskatchewan and a powerful conservative voice, urged the federal government to abandon its fast-paced program, saying Canadians would understand if the government didn’t fulfill its promise.

“I understand that the overwhelming majority of refugees are fleeing violence and bloodshed and pose no threat to anyone,” wrote Wall. “However, if even a small number of individuals who wish to do harm to our country are able to enter Canada as a result of a rushed refugee resettlement process, the results could be devastating.”

In January, a group of people were attacked as they gathered to greet newly arrived Syrian refugees at the Muslim Association of Canada community center in Vancouver, when a man on a bicycle rode up to the crowd and pepper-sprayed them. The attack was universally condemned by different political party leaders, drawing messages that urged compassion and tolerance.

The Trudeau government has made efforts to manage public perception of its resettlement efforts, conscious of potential public opposition to the government’s plan to settle more refugees.

Polls conducted later in December for Global News by Ipsos and CTV News by Nanos Research showed the opposition to the plan subsiding, with a majority of Canadians now in support of the plan. A poll conducted around the same time in the United States by Quinnipiac showed that while most opposed Trump’s plan to ban all Muslims, a minority supported bringing in Syrian refugees to the country.

The Canadian government’s plan to bring in even more refugees however may not enjoy the same support as the original plan. A more recent poll by Angus Reid taken in February showed that a majority of Canadians think that the country shouldn’t take in more than the initial 25,000 refugees.

The Trudeau government has made efforts to manage public perception of its resettlement efforts, conscious of potential public opposition to the government’s plan to settle more refugees. There is, however, a strong call to bring over more and many private sponsorship groups waiting for more refugees to arrive are asking the government to speed up the process.

Some opposition came from erroneous Facebook posts that claimed Syrian refugees were getting access to social programs more generous than those for Canadian citizens. Canadian news outlets and the government have debunked the claims to some effect.

Earlier in the year, Canada’s Immigration Minister John McCallum told reporters that refugees are not “jumping the queue” over Canadians waiting for housing and social support.

Canada plans to double its usual refugee total in 2016 to 50,000, but that includes about 19,000 Syrians who entered Canada as part of the initial 25,000 pledge. The government does not have specific targets for the makeup of the increased quota of refugees in terms of Syrian versus non-Syrian.

“Resettling refugees is a proud part of Canada’s humanitarian tradition. It demonstrates to the world that we have a shared responsibility to help those who are displaced, persecuted, and most in need of protection,” Lariviere said.

The private sponsorship program was first initiated in Canada in the late 1970s to help bring in more Vietnamese “boat people” fleeing the communist regime in Vietnam.

Canada’s use of private sponsors has led to calls by some in the United States for the government to reintroduce the Private Sector Initiative, enacted in the 1980s by president Ronald Reagan, that used private sector funding to support refugees.

According to the U.S. Department of State, the Obama administration has committed to resettling at least 10,000 Syrian refugees in the fiscal year of 2016, and expanding the total number of refugees from around the world to 100,000 by the end of the 2017 fiscal year, an increase of over 40 percent compared to 2015. The government has also created a program for U.S. citizens and permanent residents to file refugee applications for their Syrian family members.