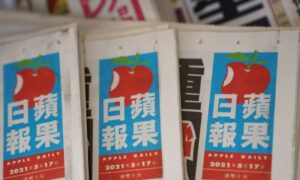 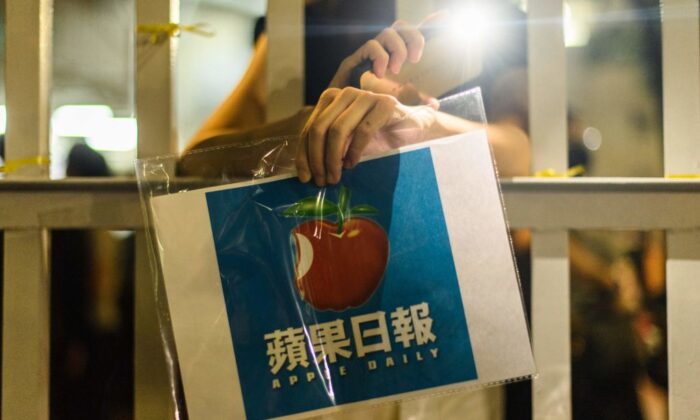 A supporter holds a poster of the Apple Daily newspaper logo outside the media company's office building in Hong Kong in the early hours of June 24, 2021, shortly after the 26 year old newspaper went to print for the last time. (Anthony Wallace/AFP via Getty Images)
Canada

“The forced closure of the newspaper, Apple Daily, as a result of charges under the National Security Law for Hong Kong is a significant blow to freedom of the press and freedom of speech in Hong Kong, and makes it clear that the powers under the National Security Law are being used as a tool to suppress media freedom and punish dissidents,” Garneau stated.

In recent years, the governments in Beijing and Hong Kong have continually tried to repudiate the Sino-British Joint Declaration, which drafted the Hong Kong Basic Law, a “mini-constitution” that guarantees the region’s democratic system and capitalist economy for 50 years—a principle often described as the “One country, two systems” policy.

“Canada is a steadfast supporter of the One Country, Two Systems principle and Hong Kong’s high degree of autonomy,” Garneau stated. “The ouster of a major media organization under the National Security Law significantly degrades these principles, guaranteed under the Sino-British Joint Declaration.”

“These freedoms are universal human rights guaranteed under Hong Kong’s Basic Law, and are in line with international standards,” Garneau said.

Apple Daily was founded in 1995—two years before Britain handed over Hong Kong to the communist-led People’s Republic of China. The media outlet started out as a tabloid known for reporting celebrity scandals, but had also upheld democratic values.

With reporting by Frank Fang