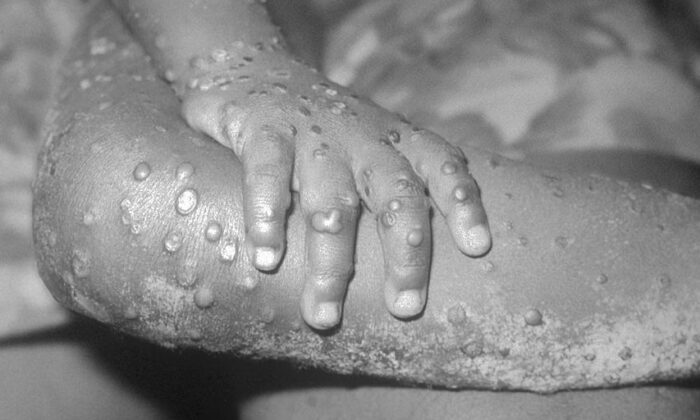 A 1971 photo from the Center For Disease Control handout shows monkeypox-like lesions on the arm and leg of a female child in Bondua, Liberia. (CDC/Getty Images)
Canada

Canada reported its first two cases of monkeypox in Quebec on May 19 as the virus spreads in the United States, Australia, and a number of European countries.

In a statement issued on May 19, the Public Health Agency of Canada (PHAC) said two individuals in Quebec have tested positive for the disease, and that they are the first-ever reported in Canada.

“Monkeypox is a zoonotic infectious disease found in parts of central and West Africa that result in occasional human infections usually associated with exposure to infected animals or contaminated materials,” said the statement.

“Limited cases have been identified in other regions in the past, including the United Kingdom, United States, Israel and Singapore, but never before in Canada.”

As part of its ongoing investigation, PHAC said the National Microbiology Laboratory (NML) is “undertaking additional testing to confirm or rule out a diagnosis of monkeypox for these individuals.”

PHAC said it remains unclear how individuals in recent international cases were exposed to the monkeypox virus.

Roughly 20 other individuals in Quebec are also suspected of being infected with the virus after suffering from “genital ulcer lesions,” the province’s Ministry of Health and Social Services (MSSS) said in a news release on May 19.

MSSS said monkeypox is usually contracted through “prolonged and close contact with an infectious person,” therefore its contagiousness is considered “limited” compared to other viruses like the flu or COVID-19.

“Generally, monkeypox resolves spontaneously,” it said, adding that antivirals exist, but require clinical evaluations prior to being recommended for use.

Symptoms of monkeypox infections include fever, headache, backache, and fatigue during a prodromal period of 2 to 3 days, according to Health Canada.

While uncommon, human-to-human transmissions are caused mainly through the respiratory tract, by direct contact with the body fluids of an infected person, or indirectly by sharing clothing, bedding, or other items contaminated by an infected person’s fluids or sores.

On May 19, the U.S. government identified their first case of monkeypox in the country this year in a man who recently travelled to Canada.

“The U.S. citizen had recently travelled to Canada from the U.S. The individual travelled by private transportation and may have been infected before or during his visit to Montreal, Quebec,” PHAC said.

Cases of monkeypox are being investigated in Australia and several European countries, including those recently reported in Belgium, France, and Germany, which came after infections were confirmed in Italy, Sweden, Spain, Portugal, and the United Kingdom.