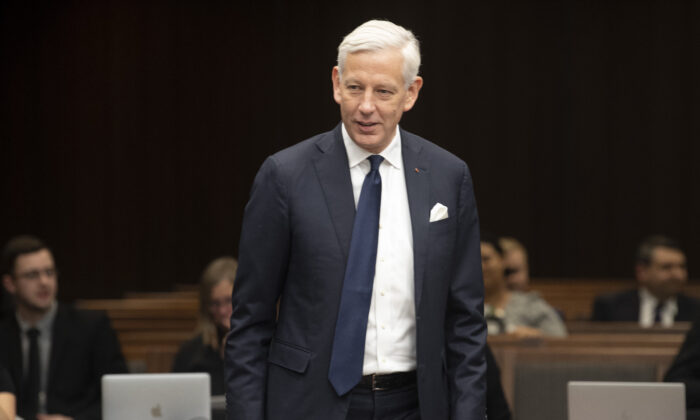 Canada's ambassador to China Dominic Barton waits to appear before the House of Commons committee on Canada-China relations in Ottawa on Feb. 5, 2020. (The Canadian Press/Adrian Wyld)
Canada

Canada’s Envoy to China Criticized for Linking Collectivism With Confucianism

Dominic Barton’s appointment as Canada’s ambassador to China has always been controversial due to his deep business ties with China as the former head of global consulting firm McKinsey.

But he came under fire from Conservative MP Garnett Genuis for, among other things, conflating China’s communist regime with traditional Confucian values during testimony given to the Special Committee on Canada-China Relations in Ottawa on Feb. 5.

“Barton was speaking in Canada but he was actually very careful to make sure his real guides in China were not ‘insulted’ by what he was saying,” Kovalio said.

As part of his opening statement, Barton spoke of the critical need to understand China’s thousands of years of history and culture to better appreciate its priorities, values, and decision-making, although Canadians don’t have to agree with them.

“They place an importance on the values of collectivism and harmony, which is owing to a Confucian heritage,” he said.

Both Genuis and Kovalio objected to the connection between collectivism and Confucianism.

“Confucianism does not mean collectivism at all,” Kovalio said. The former supports private ownership of the means of production, which is anathema to collectivism and communism.

Confucius emphasized harmony in society achieved through social and individual morality, based on the five cardinal virtues of benevolence, righteousness, propriety, wisdom, and faithfulness. How Chinese communism distorts these Confucian ideals conflicts with Western values.

Genuis called Barton’s appointment “inappropriate” and questioned him on what influence Confucianism has, if any, on how China’s communist party conducts its affairs.

“My reading of the founding texts of Confucianism is that they are very much at odds with the typical practices of the current Chinese government. It was the politics of the Marxist powers in China to try and destroy China’s Confucian history,” Genuis said.

He argued that China’s communist ideology is inconsistent with Confucianism.

“It seems to me that the political structures of China are predominantly rooted not in long-standing Confucian values but in the political philosophy of Marxism and totalitarian control,” he said.

Barton, for his part, appeared to paint the harsh reality of communism in a positive light. He said his understanding of Chinese history “is that Confucianism is very much a part of the system and how it’s working today.”

“There’s different manifestations of that,” he said, noting that this is ”rooted … in the notion of harmony and the collective good as opposed to the individual.”

Yet after 1949, under Mao Zedong’s leadership, China departed from its traditional views of harmony based on Confucianism, particularly during the destruction brought on by the Cultural Revolution. The Chinese Communist Party essentially uses Confucianism as a shield for its modus operandi.

Confucius: The New Cultural Ambassador for the Communist Party?

Jordan Peterson: Collectivism Is Tyranny Under the Guise of Benevolence

But prior to the communist revolution, Confucianism was the foundation of Chinese governance. The current regime appears intent on using that history to its advantage today.

“If one were to ask anybody to define China as a civilization in one word, it would have to be Confucianism,” Kovalio said.

He goes on to explain that what communism and Confucianism have in common is a tradition of bureaucracy.

Under Confucianism, it’s considered prestigious to have a high social standing as a bureaucrat.

However, in Confucianism, reaching a high social standing is achieved through a meritocracy and moral virtues, whereas in communism, it takes the form of corruption and cronyism.

What might first come to mind regarding collectivism is the widespread famine in the Soviet Union during Stalin’s reign. Collective ownership also failed terribly in China, Cambodia, and North Korea.

Collectivism is derived from socialist and Marxist-Leninist ideological DNA, according to The Epoch Times editorial series “How the Spectre of Communism Is Ruling Our World.”

According to Barton, “Some elements of collectivism and harmony are actually at odds with the individual rights. They’re different.”

Scholars see the relationship in a more fundamental way.

“Collectivism is a yoke affixed on the necks of man by a totalitarian state,” states the editorial series. It restricts individual freedom and holds that all must serve the state—or else.

Collective ownership has a terrible track record as it is highly inefficient. Modern examples are China’s state-owned enterprises, which are unprofitable and unproductive while relying on government subsidies. They’re often called zombies.

Jordan Peterson, psychology professor at the University of Toronto, previously told The Epoch Times that the ideology of collectivism is built on a dysfunctional understanding of caring for others and on a narrow reinterpretation of history.

Proponents of it are forever infamous as dictators—Hitler, Lenin, Stalin, and Mao. They were the ones deciding the direction of the collective and killing those who refused to fall into line.

Barton said his top priority is to secure the release of Michael Kovrig and Michael Spavor, who were detained shortly after Huawei executive Meng Wanzhou was arrested in Vancouver in December 2018 in response to a U.S. extradition request. He said he has visited them a number of times and is “unbelievably inspired by their resilience.”

Barton is also seeking clemency for Robert Schellenberg, who has been sentenced to death for drug trafficking in China.

He went to great lengths to emphasize that he is promoting and protecting human rights in his meetings with Chinese officials.

Barton wants Canada to deepen ties at all levels with China as he focuses on the opportunities for Canadian business, being very bullish on Chinese growth.

“Engagement is important—and not to the exclusion of human rights,” he said.

He is aware of those advocating a hard line against China and that Canada does have some levers to pull, but he doesn’t think Canada has to take those kinds of measures.

“Be prepared for what you ask for in that type of an approach,” Barton warned.