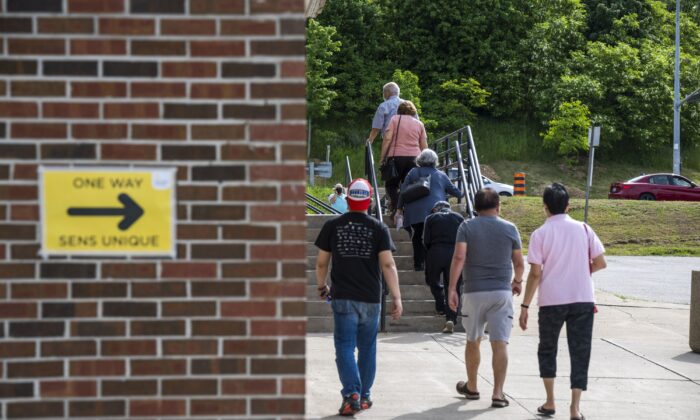 Voters head to cast their vote in the Ontario provincial election at a polling station in Woodbridge, Ont., on June 2, 2022. (The Canadian Press/Aaron Vincent Elkaim)
Viewpoints

The provincial election in Ontario concluded uneventfully this summer, the contest for the leader of the Alberta United Conservative Party is in mid-swing, and, at the time of this writing, the federal Conservative leadership convention is just around the corner.

For those who have been giddy at the prospect of replacing recent and current leaders with genuine conservatives, as opposed to another simulacrum thereof, I offer the following as a way of talking you down.

From grade school onward, Canadians have been admonished about their civic duty to vote. I’ve always wondered about that, since (as the late P.J. O’Rourke observed) voting for politicians only encourages them. Sociopaths who steal your hard-earned wealth and dictate what you must do, say, and think need no more encouragement. In a healthy society, those who run for office should have a modicum of fear of being run out of it.

After being betrayed by “Conservative” leader after leader, “small c” conservatives in Canada can be forgiven for thinking that continuing to support their “big c” parties is a little like dropping another loonie into the cup of the self-same drug-addicted mendicant who mugged them last week.

In Canada, there is an already venerable tradition according to which, once in power, both federal and provincial Conservative Party politicians ritually repudiate the social conservatives on whose backs they have ridden to victory. Their argument, self-evidently oxymoronic, is that no one can get elected as a social conservative.  The unspoken subtext is that no politician wants to be unloved by the progressive beau monde, which Conservatives court shamelessly, even as their love remains unrequited and politically emasculating. The situation puts one in mind of a famous scene in Chrétien de Troyes’s 12th-century romance, “Lancelot, the Knight of the Cart,” in which Lancelot fights his homicidal enemy with his back turned toward him so he can keep his gaze fixed on his beloved Guinevere, who has nonetheless been using him cruelly for years.

Had politics in Canada been regulated by something like the Canadian Professional Boxing Council, both the federal and provincial Conservative parties would have been banned for consistently throwing fights. For the past two years, the Trudeau regime has enjoyed the unwavering support of the federal Conservatives in its jihad against basic civil liberties throughout its eternally renewable COVID “emergency.” Most recently, the federal Conservatives voted unanimously in favour of a Liberal bill to criminalize “conversion therapy,” i.e., any counsel offered by doctors, clergy, or their own parents to gender dysphoric children that seeks to dissuade them from surgical transmutation—conversion, one might say—into the opposite sex, or doesn’t merely reaffirm their own aberrant fantasies. Under the Trudeau Liberals, the Conservatives seem generally embarrassed by their official title of “Her Majesty’s Loyal Opposition,” as if it were little more than a quaint anachronism, and opposition itself were unnecessarily divisive.

In Ontario, the provincial Conservatives were elected primarily on their promise to repeal a radical sex-education curriculum enacted by the previous Liberal government that evangelized the full panoply of “alternative lifestyles” to primary school children. Within a year of their ascent to power, they reinstated the Liberal curriculum in every edifying particular, while adding sex-reassignment, non-binary gender, and self-identified non-binary gender to the smorgasbord of liberating life-choices prepubescent students might consider before they graduate. Last month, the same provincial Conservative government unanimously enacted “anti-racism” legislation that silted up from the fever swamps out of which the 1619 Project and critical race theory first percolated.

Notably, the two most despotic provincial COVID regimens, in Alberta and Ontario, have been imposed by Conservative governments. In short, it is an index of their ontological insignificance that whether the party is in power or out makes not a whit of difference.

Conservatives have always venerated faith, hope, and charity as the highest of the virtues, but should any of them in Canada continue to insist on voting for “big c” party candidates on the basis of their campaign promises, let the latter first submit to a lie detector test, and thereafter sign a contract in the blood of an unblemished goat. Canadians will continue to support the party notwithstanding; but the only plausible explanation I’ve heard for doing so is something akin to battered wife syndrome.

I may be wrong, of course. The eventual leader of the UCP in Alberta might restore the party to its roots, and whoever takes the helm of the federal Conservatives may prove to be a conservative in more than name.

In any case, there are other grounds for hope. Since no candidates for Maxime Bernier’s People’s Party, Derek Sloan’s Ontario Party, and Jim Karahalios’s New Blue Party have been elected, none of them has been able to “grow” in office. And there will always be a crop of former federal and provincial Conservatives sitting as independents to consider. Anyone who hasn’t already been ejected from a “big c” party caucus probably isn’t one anyway.

Harley Price
Follow
Harley Price has taught courses in religion, philosophy, literature, and history at the University of Toronto, U of T’s School of Continuing Studies, and Tyndale University College. He blogs at Priceton.org. His new book, "Give Speech a Chance: Heretical Essays on What You Can't Say, or Even Think," is now available from amazon and fgfbooks.com.