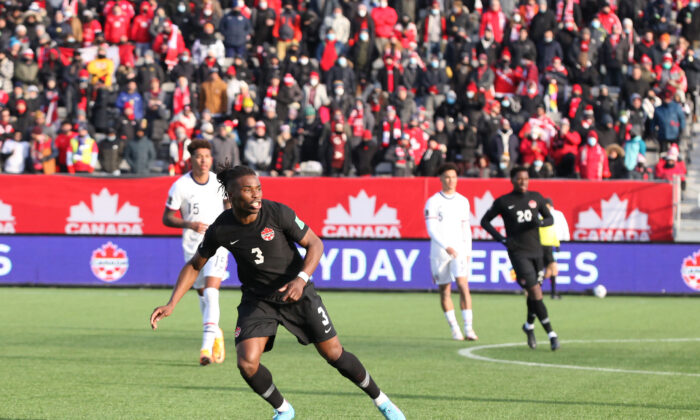 Head coach John Herdman spoke about how collective belief and the leadership qualities of the Canadian squad have been built, which enable the team members to get stronger as a group as the going gets tougher.

“Once that trust’s there, then the technical excellence. They back our tactics, they back our strategies, they play as when they’re 100 percent behind someone. You get an outcome,” he said in his post-game press conference on Jan. 30.

“And then when you’ve got trust and the clarity of the technical excellence, you get the chemistry, and that’s what you’re starting to see, players are starting to mask each other’s weaknesses,” Herdman added.

Canada has now bested the two perennial powerhouses of the CONCACAF region—Mexico and the United States— with two wins and two draws in the final eight-team Qatar 2022 World Cup qualification tournament.

Canada remained atop and unbeaten in the tournament after an impressive 2–0 win over second-place United States on Jan. 30 in Hamilton, Ontario.

In a game in which the Unites States held more ball possession, it was Canada that was far more lethal in attack and resolute in defence. Canada did not have the services of its best player, Alphonso Davies, nor the talents of one of its best midfielders Stephen Eustaquio.

Canada is now all but 100 percent certain to qualify for the Qatar 2022 World Cup, but will have to make it official during the final round of games in March.

Soccer’s ruling body FIFA singled out Canada for being the most improved team in 2021. The Canadian team reached the semifinals of the 2021 Gold Cup and is the only unbeaten team in the CONCACAF region of North and Central America and the Caribbean. Canada ended 2020 ranked 72nd but climbed to No. 40 in the rankings at the end of 2021.

Canada is no longer a pushover, and when teams face the Canadian team now, they’re scared, said goalkeeper Milan Borjan.

“This is new soccer Canada,” he said in his post-game comments.

Borjan, playing in his hometown, pulled off a miraculous save in the first half from a header at close range after a U.S. corner kick.

Toronto FC midfielder Jonathan Osorio, a veteran of the squad even though he’s just 29, said the team is very much like a family and is “willing to fight for each other.”

“They [United States] took a little bit of control, and they had most of the control for most of the game, but I’m just so proud of how the team defended today as a unit and we didn’t give much away.”

TSN soccer pundit and former Scotland international Steven Caldwell noted how the Canadians’ confidence has grown over the past few years. The United States had far more ball possession and spent most of the game—especially in the second half—in Canada’s territory, but the Canadians didn’t crack.

“It gets to the point where we get out here today and they don’t have to dominate the ball,” he said in TSN’s post-game recap. “They don’t have to take the game, but [are] not feeling anxious about the fact that [they’re] not in possession but feel comfortable and secure.”

Not having much possession but still finding ways to threaten the opposition’s goal requires an ability to transition quickly.

Canada has repeatedly shown that ability to quickly transition from defence to attack. Fullback Sam Adekugbe’s goal in injury time came as a result of controlling a long, hopeful clearance; racing in on the U.S. goal; and finishing calmly from about 20 yards away.

Canada also exorcised some demons in Honduras with a 2–0 win on Jan. 27, marking the first win in the Central American country since 1985. That win came during qualifications for the 1986 World Cup, which was the last time Canada qualified.

Star striker Jonathan David scored a world-class goal when he chested and then headed a long pass so that he could chip the ball over the Honduran keeper and into the goal.

It was another example of how talented and confident this Canadian team has become.