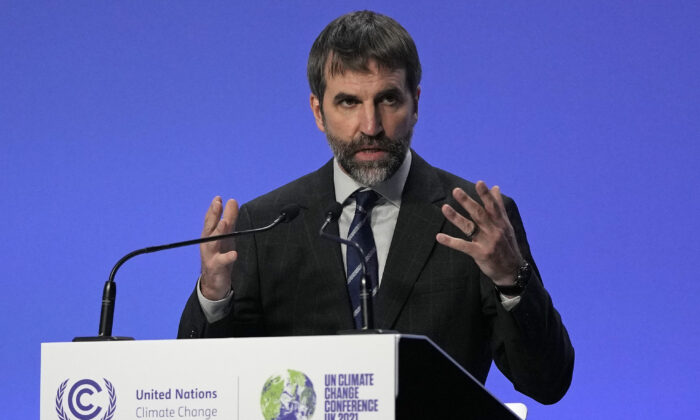 Huge spending is needed to rework the developing world’s energy systems to achieve the aims of COP26, which seeks to address climate change through mitigation and adaptation. However, climate finance, one of the pillars of the UN climate conference, has a number of shortcomings for which Canada’s experience in the arena can provide some lessons.

In June, Ottawa announced it would double its international climate finance commitment of $2.65 billion, pledged in 2015, to $5.3 billion over the next five years to help developing countries transition to low-carbon economies.

At COP26 (Conference of the Parties) that wrapped up Nov. 13 in Glasgow, Scotland, Ottawa said that, as part of its $5.3 billion commitment, up to $1 billion would be to “expand access to clean energy and to support a fair and inclusive transition for coal workers and affected communities,” according to a Nov. 4 statement from Natural Resources Canada.

Ross McKitrick, an economics professor at the University of Guelph specializing in environment, energy, and climate policy, says that one of the negative effects of international climate finance is that it has blunted the development of fossil fuels in developing countries, which has led to those countries turning to authoritarian regimes like China and Russia.

“Adding money to these climate finance funds, if anything, is just increasing the pressure for developing countries to look to China and to some extent to Russia,” McKitrick told The Epoch Times.

“It allows the Chinese government to turn a lot of developing countries into client states because of the fact that they’re now the only game in town.”

McKitrick added that Canada’s $5.3 billion “is so small, it’s not even worth making,” especially in the context of strained finances.

“In a way, it can be counterproductive from a foreign aid point of view, given the serious financial difficulties that the government of Canada is facing, if that money is diverted from the aid budget, so that more pressing needs go unmet,” McKitrick said.

The second issue, McKitrick said, is that the climate finance budget is “undefined.”

“There’s no real sense of what this money is actually going to do, what’s going to be the indicators of success.”

The report said: “The government has not set out a specific framework for allocating these resources [the $5.3 billion pledge] based on the lessons from the previous $2.65 billion allocations and an in-depth consultation in 2020 on future climate finance.”

The COP21 in Paris in 2015 agreement called for developed nations to support developing nations with at least US$100 billion in climate finance a year by 2020. That target has been missed.

COP26 urged full delivery on the US$100 billion annually through 2025, emphasizing the need for transparency on progress. Also, developed countries are being urged to at least double their climate financing—to $40 billion annually—for adaptation initiatives in developing nations.

Adaptation deals with reducing the impacts of a changing climate, while mitigation is about reducing emissions.

It said that Canada ranks third among seven donors that provided some of their climate finance through loans. In Canada’s case, 75 percent of its climate finance between 2016 and 2019 was provided as loans.

“The wide-spread use of loans to governments and the private sector in developing countries for climate projects will seriously exacerbate debt distress for many of these countries, now compounded by the pandemic,” AidWatch Canada stated, adding that at least 62 developing nations spent more on interest costs than health care in 2020.

“The level of loans in the overall profile of climate finance is a major issue,” stated the report, noting that the 2015 Paris Agreement stressed the importance of “grant-based resources for adaptation.”

The non-profit also found that Canada’s aid is overwhelmingly (84 percent) channeled through multilateral organizations—multilateral development banks (MDBs), United Nations entities, multilateral funds such as the Green Climate Fund. This proportion is much higher than that (48 percent) of a group of 30 comparable Organisation for Economic Co-operation and Development (OECD) donor countries as a whole.

The report notes that the MDBs, like the World Bank, rely particularly heavily on non–concessional loans—loans at or near-market rates and without easier terms—for adaptation and especially when providing mitigation financing.

The report also estimates that just 28 percent of Canada’s climate finance disbursements have been for adaptation, while 72 percent have been for mitigation.

‘Greenwashing’ and the Private Sector

McKitrick says that due to the vague nature of the commitments for climate financing, there’s bound to be a lot of “greenwashing”—money that goes into building roads or homes can be categorized as adaptation, for example.

Companies face a great deal of pressure from public opinion and regulators to be onside with the green movement, but they also have to provide a good rate of return to shareholders, McKitrick points out.

“In a lot of cases, I think the easiest way for them to bridge the gap between those opposite expectations will be through greenwashing.”

A blog on the International Development Economics Associates website published Nov. 3 said most climate finance gravitates toward mitigation instead of adaptation, as donors “prefer publicizable ‘easy wins’ from climate mitigation.”

“As climate adaptation is rarely lucrative, it is of less interest to private investors. Rather, private finance favours mitigation investments generating higher returns,” said the blog’s authors Anis Chowdhury, an economics professor at the University of New South Wales in Australia, and Jomo Kwame Sundaram, a former UN assistant secretary-general for economic development.

Matthew Gouett, a fellow of the Norman Paterson School of International Affairs at Carleton University, points to OECD analysis showing the lack of interest from the private sector to work alongside governments in climate finance. Namely, in 2016, for every US$1 of bilateral and multilateral climate finance, just 21 cents was mobilized from private investors—and the figure was roughly the same in 2019.

“Private finance is currently more interested in investing in certain sectors of the climate change issue, namely climate mitigation through green energy, and has shown less interest in others, such as adaptation and nature-based solutions,” Gouett wrote in an Oct. 26 blog.

Often a problem with foreign aid has been its ineffectiveness due to being less driven by user need than by benefits to the donor country, where the aid provision is well advertised, boosting the donor’s public image.

“For any kind of investment to be effective. First of all, it needs to be driven by what the user perceives as their need,” McKitrick said.