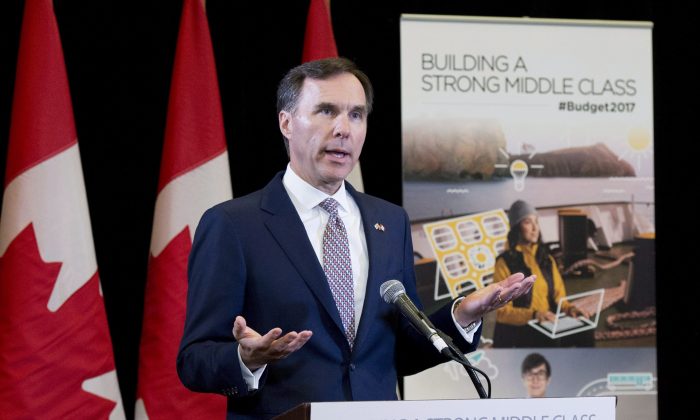 Minister of Finance Bill Morneau speaks during a press conference before tabling Budget 2017 in the House of Commons on Parliament Hill, in Ottawa on March 22, 2017. Innovation is a major focus in the Liberals’ second budget. (The Canadian Press/Justin Tang)
Business

OTTAWA—Spurring innovation is one of the top priorities in the Liberal government’s second budget under Finance Minister Bill Morneau.

Canada does a great job in creating companies, but fares poorly in scaling them up and turning them into commercial successes. This has been a long-standing problem, at which Budget 2017 takes aim with a new venture capital (VC) initiative and a plan for a new intellectual property (IP) strategy.

However, while the Liberal government makes some positive headway on the innovation file, analysts are skeptical of the “picking winners” approach and the overall incentive system for startups.

“We know how important it is to make sure that companies in a country that are growing rapidly have access to capital, so by focusing on venture capital, we know that helps late-stage companies,” Morneau said during a press conference prior to tabling the budget in Parliament.

We need work on things like intellectual property.
— Bill Morneau, Minister of Finance

The VCC program aims to satisfy a recommendation from Morneau’s Advisory Council on Economic Growth (ACEG) to create pools of capital to help scale up startups. The ACEG’s Feb. 6 submission pointed out that a $400 million–$500 million funding gap exists for early- and expansion-stage companies and another $200 million–$350 million gap exists for growth-stage companies annually.

“I think that’s a very good sign in terms of continuing that VCAP that we so desperately needed,” said Mike Woollatt, CEO of the Canadian Venture Capital and Private Equity Association (CVCA) in a phone interview.

With the VCAP, the government has successful experience under its belt in leveraging VC funds with the private sector. It raised $1.356 billion, which included roughly $340 million of government funds. According to Budget 2017, the VCC could inject $1.5 billion into the innovation economy.

“I don’t know of another program that could do such a thing in such a short period of time,” Woollatt said about the VCAP. “It’s been run really well.”

Sulzenko hypothesized maybe the biggest bang for the buck comes from something like mining or fintech—which aren’t among the six key areas.

“The whole concept of innovation should be more inclusive rather than here are the go-go industries and we’re going to support them,” Sulzenko said. “So I’m again somewhat skeptical of that.”

The whole concept of innovation should be more inclusive.
— Andrei Sulzenko, School of Public Policy, University of Calgary

Ian Lee, associate professor at the Sprott School of Business at Carleton University, is skeptical of the government’s push to spur innovation. To him, a major sticking point is the incentive system—having a competitive tax system and helping all startups—instead of tossing VC funds at specific companies. With the Trump administration aiming to cut taxes, Canada will become less appealing for businesses on that basis.

“You shouldn’t try and stop them [startups] from becoming rich in the first place,” Lee said. “It’s a lack of incentives problem in Canada.”

Morneau feels that the government’s VC investments leveraged with private capital is the way to go, without further complications of the tax system like breaks for certain startups.

“We want to have an efficient tax system that is less complex and have our resources focused on the place where we can have a direct impact on the companies’ success, which is what we’re doing through VC, and through working with the private sector on later-stage backing,” Morneau said.

Very few details are available at this stage for Canada’s upcoming IP strategy. By some measures, Canada’s IP regime strength lags its peers, and despite being a “high-income economy,” according to the Global Intellectual Property Centre (GIPC), it ranks closer to middle-income economies instead of the United States and United Kingdom.

In a March 17 Globe and Mail editorial, Jim Balsillie, former co-CEO of BlackBerry, criticized the government for not focusing sufficient efforts to improve Canada’s IP strength.

“Over the past 30 years, commercialization of intellectual property (IP) has been the primary driver of new wealth,” Balsillie wrote. He called IP the “most valuable corporate asset” and that it is critical in scaling up companies.

“We know that there’s more to do. We know that we need work on things like intellectual property to make sure that we have a regime that works in Canada,” Morneau said.

“The fact that they’ve actually put it [IP strategy] in the window as an issue shows that they recognize for many industries that it’s really important,” said Sulzenko.

“Having a very good IP regime is very pro-innovation, so I think it fits with the theme,” he said, adding that for some 25 years, governments have not paid enough attention to IP strategy.

Having concluded the Comprehensive Economic and Trade Agreement (CETA) with the European Union should help strengthen Canada’s IP regime. According to the GIPC, it provides the promise of bringing “much of Canada’s national IP environment into the modern era and aligned with international best practices and other developed OECD economies.”

While Sulzenko and Lee are skeptical of some of the government’s innovation strategies, they praised the government for the Global Skills Strategy, announced last fall, which fast-tracks visas and work permits for talented internationals.

“There is a real recognition that if you invest in people, that’s much more important in the long term than investing in specific businesses,” Sulzenko said.