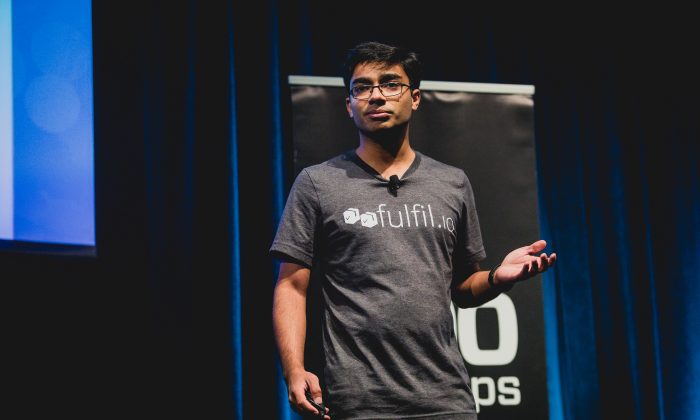 Sharoon Thomas, CEO of fulfil.io, makes a presentation at 500 Startups in Mountain View, California in February. He moved his company to Toronto in May after successfully applying through Canada’s startup visa program. (500 Startups)
Business & Economy

Toronto emerges as a natural destination for entrepreneurs
By Rahul Vaidyanath

He is the CEO of fulfil.io, a startup that provides cloud-based inventory management, purchasing, and accounting functions to small- and medium-sized retailers so that they can fight Amazon’s fire with fire of their own.

Thomas, originally from India, went to the United States as an entrepreneur, but found that as an employer his visa options were limited. He was motivated to move to Canada because of its Start-up Visa (SUV) program.

“Canada seemed like an excellent fit for what we were doing as an early stage company,” Thomas, who relocated to Toronto in late May, said in a phone interview.

Early-stage companies have a fixed amount of capital and struggle to bear the risk of lengthy delays. Canada’s ambitious two-week turnaround for processing visas and work permits brings a greater level of certainty to a startup’s operations. The early reports are that the government is delivering as advertised.

“By issuing a work permit in two weeks, I think they just changed the playing field for startups and it makes it very, very attractive for a startup to build a company in Canada,” Thomas said.

One of the major challenges for rapidly growing companies like tech startups is finding people with the right technical skills and experience. This is not to say that Canadian universities such as those in Toronto and Waterloo aren’t producing some of the best computer science, engineering, and math graduates in the world. But sometimes, the right fit isn’t there in a pinch.

Another challenge is developing a more entrepreneurial and innovative workforce to drive job creation and economic growth. In this case, porting over whole companies founded by international talent can play a vital role.

The government’s Global Skills Strategy takes a two-pronged approach to addressing these issues. It allows high-growth Canadian companies to quickly bring in international talent to help them scale up. It also provides an expedited process, through the SUV program, for companies to relocate to Canada, make investments, and expand production.

The SUV program has almost finished its five-year pilot, and a recent evaluation found that it is achieving its objectives. By July 15, 117 applicants have been approved for permanent residence; they represent 68 startups launched in Canada.

“The early feedback from the companies in terms of the responsiveness and the timeliness is people are extremely happy with this program,” said Daneal Charney in a phone interview. Charney is director of talent for MaRS Venture Services. She helps startups hire via the new expedited process.

Charney says most of the companies she works with are used to hiring international talent and find the expedited process of huge value to them. Previously the more traditional route for acquiring global talent came through the Labour Market Impact Assessment (LMIA) program, which was fraught with delays lasting several months.

“The person coming in is going to be transferring skills and knowledge to Canadians so that, in turn, Canada gets an advantage, knowledge is transferred, and Canadian citizens and permanent residents benefit,” Gani said in a phone interview.

Canada wants more innovators and entrepreneurs. They can be created and also acquired. But, importantly, the government realizes there will be failures along the way, according to Andre Garber, who as director of Dentons Canada LLP’s startup program advises entrepreneurs on legal matters.

“They’re looking for good entrepreneurs and are embracing the fact that failure in the startup ecosystem is real,” Garber said in a phone interview. “They’re not penalizing legitimate businesses for trying in Canada and rescinding permanent residence offers if the business does not succeed ultimately.”

The other advantage of these government initiatives is that their usage depends on the private sector.

“What the government is asking industry to do in Canada is just to use their skill and judgment to vet the opportunities to determine the likelihood of success in Canada,” Garber said.

This should minimize waste, which is sometimes associated with excessive government involvement or “picking winners.”

Startups are advised at an early stage to think globally. Garber says the SUV program allows startups to act globally earlier as well, by helping international entrepreneurs relocate and bring talent to Canada.

“It has the potential to be a tremendous talent acquisition tool and global scaling tool,” he said.

Toronto ranked 10th among 85 cities examined by furnished apartment website Nestpick for best quality of life for those in the startup industry. The platform focuses on relocation patterns of young professionals across the world and ranked the cities based on their startup ecosystem, salaries, benefits, cost of living, and quality of life. Toronto’s highest score was for its startup ecosystem.

Toronto is also a natural spot for fintech companies to locate given the concentration of big banks. This is a clear advantage over Silicon Valley.

Thomas’s company emerged from the 500 Startups program in Mountain View, California. He said, “It’s significantly cheaper to build a company that requires a lot of people in sales and support, so we thought Toronto would be a better place to build a company.”

Thomas is eager to hire sales talent. He has a team of three in Toronto now and is aiming for 10 by the end of the year.

It’s one startup, but there are many more following a similar trajectory.

By all accounts, the Global Skills Strategy is a major step in the right direction in the government’s push to make Canada a leader in innovation and develop a more entrepreneurial culture.