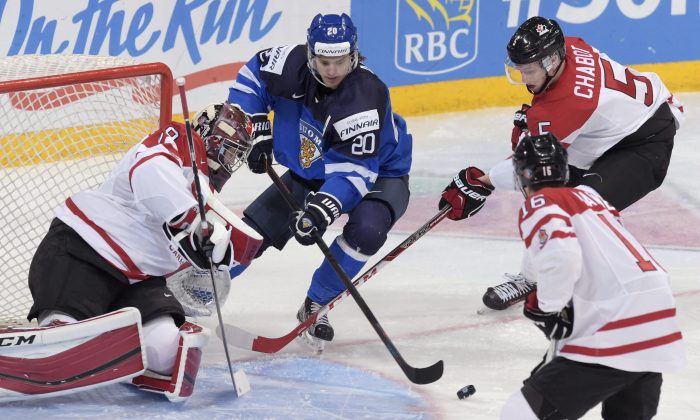 It’s not often that Canada has a bitter pill to swallow and acknowledge that it was not even close to being good enough to win gold at the World Junior Hockey Championship. After all, this is the nation that won five straight golds from 2005 to 2009.

But more recently, five different teams have won the tournament in the last five years. Canada has now won gold once in the last seven years.

Canada played its best game of the tournament, but came unglued at critical moments and exited Helsinki in sixth place after a 6–5 loss to Finland in the quarterfinals on Saturday. Canada’s 17-year streak of reaching the semis at the world juniors is over.

“I thought it was the best game of the tournament for sure,” Canada’s Mitch Marner told TSN. “We worked as hard as we could tonight. It’s a big disappointment coming out and losing this early.”

It was a case of last year’s gold medalist shooting itself in the foot with bad penalties, unreliable goaltending, insufficient production from veterans, and even questionable coaching decisions.

“You need your best players. You need a team to win,” said head coach Dave Lowry.

A team needs to have its best squad to win and this usually means an “older” group with many returning players. Canada had three 19-year-olds and four returning players, so that wasn’t ideal to begin with.

While Canada didn’t have the quality of the 2015 squad, it was still expected to compete for gold. In the end, the best this squad came up with left a lot to be desired.

Typically Canada would open this tournament against one of the group’s minnows, but it took on a talented U.S. squad instead. Canada lost 4–2. Maybe a couple of bounces went the way of the Americans, but there’s no denying that U.S. goalie Alex Nedeljkovic outplayed Canada’s second-string goalie Mason McDonald. First-choice goalie Mackenzie Blackwood was suspended for the tournament’s first two games.

Canada then whipped Denmark 6–1 and it seemed things were back on track. If Canada beat the Swiss in regulation, they would have still have a chance to top the group after Sweden edged the U.S. 1–0.

But Canada fell behind 2–0 to Switzerland and had to battle for a shootout win. First place in the group went to Sweden and Canada could finish no better than third place after the U.S. cleaned up against Switzerland and Denmark.

It’s a big disappointment coming out and losing this early.
— Mitch Marner

Canada’s misfiring power play was one reason it finished third in group play. Canada didn’t score on a five-minute man advantage against the U.S., nor did it on a five-on-three against the Swiss.

Winning the group is a massive advantage as it means matching up with the fourth-place finisher from the other group. At the world junior level, there is a drop-off in quality after the top five or six teams. Because of Canada’s third place finish, it got paired against a second-place finisher—Finland.

Canada started off against the Finns as if it had regained its swagger and took a 2–0 lead in the first period. In each of its four group-stage games, Canada gave up the opening goal, but this looked like a different Canada.

The Finns got on the board with 11 seconds left in the first period when Blackwood let in a bad goal five-hole. It was an error, but all was not yet lost.

Finland tied it 2–2, but Canada retook the lead. After having conceded three goals on 10 shots, Finland switched goalies. This move turned the tide as the incoming Kaapo Kahkonen shut the door for the rest of the period and Finland took a 4–3 lead into the third period.

Blackwood was struggling. Finland’s third goal came from an impossible angle as Blackwood wasn’t tight against his right post. At this point, Lowry should have pulled Blackwood, but he stuck with him the rest of the way.

In the third period, Blackwood failed to adequately control a rebound, which led to Finland’s fifth goal.

The third period also showed the brilliant, but undisciplined nature of Canada. Marner scored two power play goals, but negated a chance for another man advantage with a retaliatory roughing penalty.

And one of the squad’s 19-year-olds, Jake Virtanen took two penalties on the same play, allowing Finland to score the winner. The Vancouver Canucks player ended the tournament with one assist and 10 penalty minutes in five games.

While they are still juniors, better control of emotions is necessary when so much is on the line. Canada may feel the calls didn’t go their way, but it’s critical to understand the rules and how they are applied.

In absolute terms, it was a sloppy performance by Canada. But relatively speaking, it was their best game. That puts into perspective the kind of tournament it’s been.

After the quarterfinal round, only Marner and Strome cracked the top 10 in scoring. Canada stands dead last in penalty killing and has the second worst save percentage.

A sixth-place finish for Canada is just that—an accurate reflection of this team’s performance against the best junior hockey players in the world.