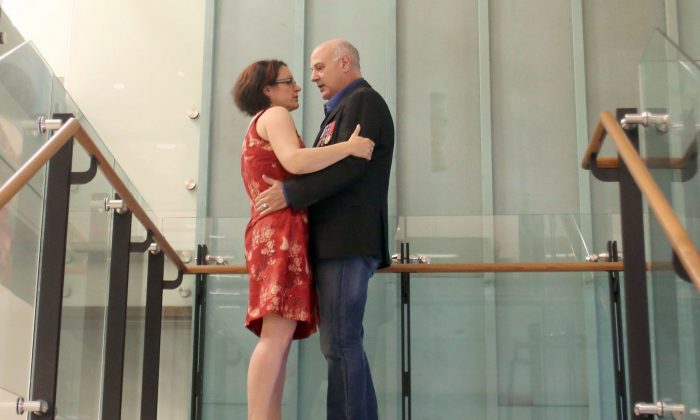 Jenifer Migneault comforts her husband, veteran Claude Rainville, who suffers from PTSD, after she tried to speak with Veterans Affairs Minister Julian Fantino in Ottawa on May 29, 2014. Migneault spoke to reporters on Parliament Hill June 4, 2014 regarding the issue of caregivers helping veterans with PTSD. (The Canadian Press/Fred Chartrand)
Canada

OTTAWA—A loosely knit group of outraged ex-soldiers rallied Wednesday against what it calls the insurance-company mentality of Veterans Affairs, demanding legislation spelling out the moral obligation Canada has towards its military veterans.

Retired major Mark Campbell, a decorated soldier who lost both legs in Afghanistan, told a small, vocal rally on Parliament Hill that he has a hard time sleeping—but not because of his injuries or the associated mental trauma.

“This is not what has me punching and trying to kick in bed at night,” said Campbell, motioning to his missing limbs. “My trauma continues every single day (because of) my sense of betrayal at the hands of the Canadian government.”

Over the next two weeks, the group plans a series of protests on Parliament Hill to call public attention to a system they say has long been rigged to deny and delay benefits in the hope that the claimants will eventually die.

“You have to know what is happening to us because we’re the ones who had your back—and you need to have ours.”

Magill described the dizzying array of bureaucratic hoops that she and her husband have had to jump through as a “war of attrition.” Other troops in need of care often give up pleading for the benefits to which they are entitled, she added.

The protest comes after a House of Commons committee made 14 recommendations Tuesday to make the system more responsive to the needs of former military members.

The veterans committee had some good ideas, but that’s all they’ll be until the government accepts and adopts them, Magill said.

The veterans hope to draw crowds similar in number to the demonstrations of the 1920s, when frustrated First World War veterans fought tooth and nail for recognition and a benefits system that’s been part of the fabric of military life ever since.

In its response to a class-action lawsuit launched by veterans of the war in Afghanistan, the Harper government has cast doubt on how secure that commitment might be.

Justice Department lawyers have said they intend to argue that the country has no extraordinary obligation to its soldiers, and that the current administration cannot be bound by the promises of previous governments.

That position enrages veterans, who say it violates the country’s sacred obligation to those who serve.
Among other things, the Commons committee recommended that the controversial new veterans charter be amended to include exact wording from its predecessor: that the law should be “liberally construed” in favour of veterans.

The protesters, however, say that rather fuzzy distinction is at the root of complaints about both the old and the new systems, because it has long given bureaucrats wiggle room to throw up roadblocks and deny benefits.

They say the only remedy is clear legislation or a military covenant similar to one in Britain which spells out that the nation has a “duty of care” to its soldiers.

“If they put it in legislation, we wouldn’t have people fighting the (class-action) lawsuit right now, where the government is saying they owe us nothing,” said Magill.

Campbell, who is one of six soldiers at the centre of the class action, said legislation or a social covenant would solve a lot of problems.

“It would be beneficial for those who are serving, because they would know once and for all that the government has their back should they be injured in the line of duty—or worse, killed,” he said.

David MacLeod, a protest organizer who spent 27 years in uniform, said the government is guilty of spreading “half-truths” about the way veterans are being treated.

The government is quick to summon them for service and call them heroes, but leaves them mired in a bureaucratic swamp when it comes time for compensation, MacLeod said.

The Conservatives have claimed they are cutting red tape at Veterans Affairs. Just last week, Fantino argued before the Commons committee that the government has injected an additional $4.7 billion into the system since 2006.

“In fact, the seriously injured veteran is eligible for thousands of dollars each month, up to and including after age 65,” Fantino told the committee.

“In some cases, a veteran can receive over $10,000 a month in financial compensation. This is in addition to two major tax-free award payments totalling in excess of up to a half-million dollars.”