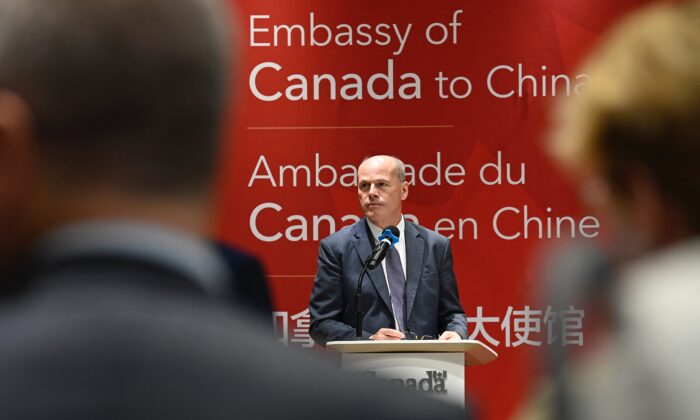 Deputy chief of Mission of Canadian embassy Jim Nickel speaks to journalists and diplomats at the Canadian Embassy in Beijing on Aug. 11, 2021. (Jade Gao/AFP via Getty Images)
Canada

Canada’s acting envoy in Beijing will be sent to Taiwan to take on the unofficial role of ambassador to the self-ruled island amid its rising tensions with China, says a report by Globe and Mail.

Jim Nickel, chargé d’affaires in Beijing, has been appointed by Ottawa to become the next executive director of the Canadian Trade Office in Taipei, whose mission is to represent Canada’s interests in Taiwan in “the absence of formal diplomatic relations.”

Canada’s current policy with Taiwan does not acknowledge its sovereignty and does not maintain official diplomatic relations with it.

News of Nickel replacing diplomat Jordan Reeves was first reported by the Globe on Sept. 15, based on information from two Canadian officials and a source in the Taiwanese government. The media outlet said it is not identifying the three as they were not authorized to publicly discuss the matter.

The Epoch Times reached out to Global Affairs for confirmation but didn’t hear back by publication time.

Guy Saint-Jacques, former Canadian ambassador to China, says the arrangement for Nickel to take on the new role is a “good move” by the federal government.

“It’s a good move because Jim will be one of the more senior guys we’ve sent to Taipei, and because of his experience in Beijing, I think he will be an important person to provide advice back to Ottawa,” he told the Globe.

Saint-Jacques said Nickel’s experience as a diplomat will enable him to provide vital intelligence on China’s aggression against Taiwan, as well as strategic input into the Indo-Pacific strategy needed by Foreign Affairs Minister Mélanie Joly.

Beijing has long considered Taiwan to be a breakaway province, despite the fact that Taiwan is a de facto independent country. Since March 2019, the Chinese regime has been ramping up military aggression in Taiwan, sending military aircraft into the island’s Air Defense Identification Zone.

In August, the regime launched live-fire exercises off Taiwan’s coast in response to U.S. House Speaker Nancy Pelosi’s visit to the self-ruled island on Aug. 2–3. The drills included missile strikes on targets in the seas north and south of the island in an echo of the last major Chinese military drills in 1995 and 1996 aimed at intimidating Taiwan’s leaders and voters.

On Aug. 24, the communist state issued a statement warning it would take “forceful measures” if Canada interfered in Taiwan, a week after it emerged that a delegation of Canadian parliamentarians was planning to visit the island later this year to explore trade opportunities.

“We urge the Canadian side to abide by the ‘One China’ principle and respect China’s sovereignty and territorial integrity,” the Chinese Embassy in Canada said in a statement.

The threats came after Liberal MP Judy Sgro, who heads the Taiwan-Canada Parliamentary Friendship Group, said on Aug. 16 that she and her fellow members were planning to visit Taiwan in October.

In response to Beijing’s warning, Sgro said at the time the trip would focus on trade and that the lawmakers’ intent was not to disrupt and cause problems for Taiwan or with China.

In an interview with the Globe, Sgro acknowledged that the Chinese Embassy had lodged a formal complaint against them but said Canadian MPs would not bend to Beijing.

“We are enhancing democracy and respect for democracy and building relationships. We are not going there to comment on what China does.”