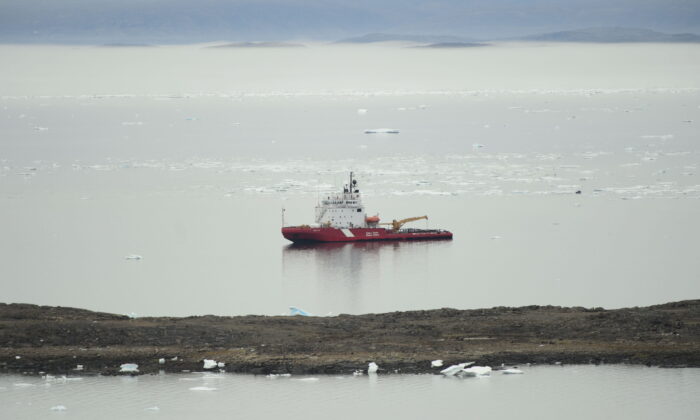 A Canadian Coast Guard vessel sits off the coastline of Iqaluit on Aug. 2, 2019. (The Canadian Press/Sean Kilpatrick)
By Peter Wilson

Canada would need Russia’s help in conducting a response effort if a major “search and rescue” incident were to occur at the North Pole, says the assistant commissioner of the Canadian Coast Guard’s Arctic region headquarters, Neil O’Rourke.

Speaking to the House of Commons national defence committee on Nov. 22, O’Rourke said that with the increased number of commercial cruise ships travelling in the Arctic comes an increased risk of a major rescue incident occurring, which he said the Coast Guard would be incapable of handling alone.

“Our reality right now is that if there is an incident at the North Pole that requires an evacuation of a cruise ship, we will have to work with Russia,” O’Rourke said on Nov. 22.

O’Rourke said the collaboration would be necessary despite the “geopolitical reality” of Russia’s invasion of Ukraine, which has sparked a number of sanctions from Canada.

“Whether we like it or not, we may be put into that situation,” O’Rourke said.

Conservative MP Michelle Rempel Garner later asked O’Rourke to clarify his comments and asked how likely it is for such a major rescue incident to occur.

“I might frame it as not that we would need Russia’s assistance, but if it’s something that is happening at the confluence of where our areas of responsibility are, which is the North Pole, that we would likely have to be multiple countries to respond,” O’Rourke said.

“Has your department conducted any analysis on how likely this is to occur?” asked Rempel Garner.

O’Rourke also said that none of the Arctic countries could alone handle a major rescue incident occurring as deep in the region as the North Pole.

“It takes a minimum of four days to get there,” he said in reference to the North Pole. “And we see that there could be a problem there.”

“Yes, this year there are a couple,” O’Rourke said, before elaborating on potential response measures if a cruise ship incident occurred in the northernmost part of the region.

“Probably what we would do is send a helicopter up there and send in people until the icebreaker could arrive, but we wouldn’t be able to evacuate several hundred people without a ship,” he said.

O’Rourke also faced questions about the Coast Guard’s icebreaker ship fleet in the far north, which he said consists of a total of 19 ships.

“How many are functional during the coldest period of the year?” asked Desilets.

“I’ll have to get back to you with that information,” O’Rourke replied.

“Is it half of the icebreakers?” Desilets asked.