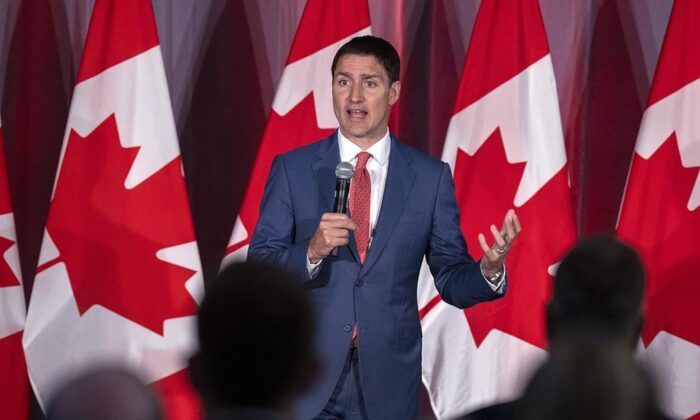 The federal government will create a team to battle Russian disinformation and propaganda stemming from the war in Ukraine, Prime Minister Justin Trudeau announced on Aug. 23.

Trudeau made the announcement during his appearance at the virtual Summit for Heads of State and Government of the International Crimea Platform, where over 50 representatives from various nations announced ways in which they would support Ukraine against Russia’s invasion of Crimea.

“I want to repeat, yet again, that there are no sanctions on food. When the Russian regime blames sanctions for the food crisis around the world, they’re engaging in disinformation,” said Trudeau.

“We need to continue fighting Russian disinformation. That’s why Canada will create a dedicated team to help increase our capacity to monitor and detect Russian and other state-sponsored disinformation,” he continued.

Trudeau said the anti-disinformation team will allow Canada to have “deeper international collaboration, including through the G7 rapid response mechanism,” which is an initiative between G7 nations to prevent threats to any countries in the treaty.

“The Kremlin has long spread disinformation and propaganda to achieve its objectives,” reads the document. “It continues to disseminate lies to justify its unprovoked, unjustifiable invasion of Ukraine.”

In March 2022, Heritage Minister Pablo Rodriguez announced that the federal government had selected a panel of 12 experts to collaborate on and make recommendations to Ottawa before it tables a new bill geared toward regulating “harmful” online content and “disinformation.”

“The internet has allowed for more mis- and disinformation, more polarization than ever before, and we’re much more likely to be exposed to and hurt by unacceptable hateful content,” said Rodriguez in March.

During the Crimea summit, Trudeau also announced increased sanctions and other restrictive measures on over 60 “close associates” of Russia and also on the Russian drone-making company Concern Avtomatika, which the government called a “defence sector entity … complicit in Russia’s invasion of Ukraine.”

The prime minister also increased Canada’s financial aid to Ukraine by loaning $450 million to support their purchase of heating fuels for the winter and $52 million to help Ukraine address its grain shortages.

Canada has now committed over $3.4 billion to Ukraine in 2022, including almost $2 billion in direct financial assistance, which has already been disbursed.