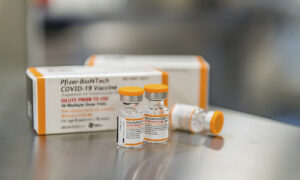 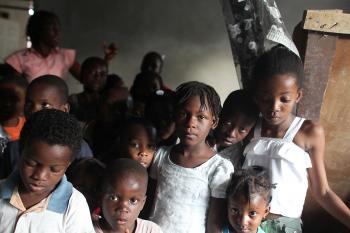 Haitian orphans at the Foyer de la Patience des Infantes orphanage, Jan. 31, 2010, in Port-au-Prince, Haiti. Child smuggling was a problem in Haiti even before the earthquake, with thousands of children disappearing every year. (Mario Tama/Getty Images)
US

“We are working to put as many children as possible on the flights, given the logistical difficulties in Haiti,” Citizenship and Immigration Canada (CIC) said in a statement update on the government’s expedited adoption of Haitian orphans, dubbed “Operation Stork.”

The latest flight brought 31 children aged 6 months to 16 years. They were from the approximately 217 children approved by the Haitian government to come to Canada who were already in the adoption process when the massive 7.0-magnitude earthquake devastated Haiti on Jan. 12.

The new group joined the 148 adoptees from previous flights already united with their Canadian adoptive families.

Operation Stork is expected to taper off after the remaining cases clear provincial and territorial requirements to be brought to Canada.

After facilitating all adoptions in process since before the earthquake, the Haitain government has said it will only approve orphaned children to leave the country whose cases it has investigated and deemed as legitimate adoptions.

On Tuesday, CIC also released a notice advising Canadians not to travel to Haiti or its neighbouring Dominican Republic to try to bring children back to Canada without proper legal authority—even children who are relatives.

CIC cites “reports that children are being abducted and/or sold in Haiti. People have also tried to obtain Canadian visas for minor children by using fraudulent documents.”

Authorities in Haiti and worldwide are concerned about child trafficking, as are aid organizations with long experience working in the Western Hemisphere’s most impoverished nation.

During the foreign ministers’ conference on Haiti held in Montreal on Jan. 25, Care, Oxfam, UNICEF, and Plan Canada were among 18 Canadian NGOs that urged prioritized assistance to unaccompanied children and other vulnerable groups and called for a moratorium on new international adoptions.

Last week, 10 American Baptist missionaries were arrested for “kidnapping” as they tried to transport a busload of 33 children out of Haiti into the Dominican Republic where they have an orphanage. It emerged that many of the children were not actually orphans.

Carleen McGuinty, child protection policy adviser at World Vision Canada, said that even before the disaster, “children were living in poverty, being trafficked, being used as domestic slaves in other families’ homes. They were already in a very desperate situation.”

UNICEF’s 2005 statistic showed that 55 percent of Haiti’s population lived below the international poverty line of US$1.25 per day.

The organization estimated that in 2007, there were 380,000 orphans under the age of 17 in Haiti where over 4.2 million of the population of 9.6 million were under 18. Children living in orphanages included those left there by their parents as a result of extreme poverty.

UNICEF estimates that as many as 2,000 children per year are trafficked to neighbouring Dominican Republic, often with their parents’ consent.

Next to providing for their basic needs such as food, water, shelter, and medical assistance, World Vision’s priority is to help separated and orphaned children trace and reunite with their immediate or extended family members, said Ms. McGuinty.

The relief organization just opened three camps in the Haitian capital of Port-au-Prince, what it calls “child-friendly spaces,” which consist of large tents where children can receive care and support for their physical and emotional needs, including dealing with grief and loss.

“They’ve seen things that no child should see, so they need a place where they can get back to normal, where they can play soccer, draw, talk to other children, and where they’re safe,” Ms. McGuinty said.

UNICEF reported that it has carried out an assessment of children in 60 orphanages in Port-au-Prince and mobile teams are trying to identify the children on the streets who may be orphaned or just separated from their family.

UNICEF advised that although many people are willing to adopt Haitian orphans, experience shows that what the children most need right now is physical and emotional support where they are.