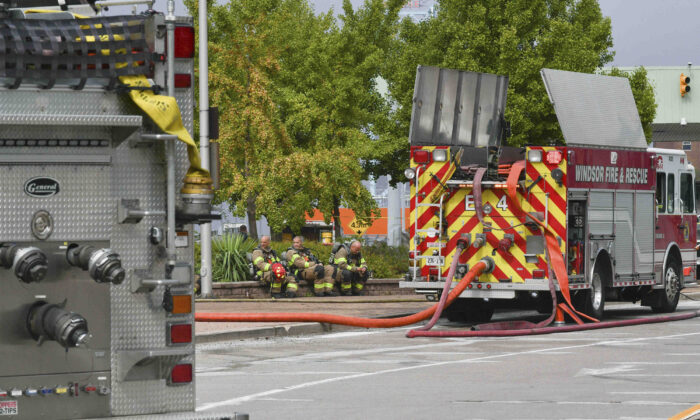 Firefighters take a break by the Ambassador Bridge border crossing in Windsor, Ontario, on Oct.4, 2021. (Rob Gurdebeke/The Canadian Press via AP)
US News

WINDSOR, Ontario—The busiest border crossing between Canada and the U.S. was closed to traffic for more than two hours on Monday after authorities found possible explosives during a vehicle inspection.

The Ambassador Bridge that links Windsor, Ontario, and Detroit was shut to all traffic and the surrounding area was evacuated as well.

Windsor police said the Canada Border Services Agency alerted them after possible explosives were found in a vehicle in the secondary inspection area of the bridge complex.

Police said no direct threats were made to places or people in connection with the possible explosives and the crossing was reopened.

The border agency said it was working with emergency officials on both sides of the border to monitor the situation and minimize traffic disruptions.

Vehicles affected by the closure were being rerouted to the Windsor-Detroit Tunnel and the Blue Water Bridge in Sarnia, Ont.

The bridge is critical to trade between the two countries.