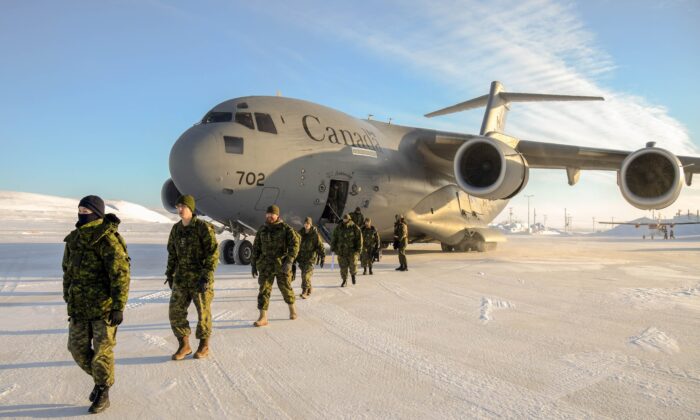 No sooner had a gathering to discuss modernizing the defence of North America taken place than two Russian strategic bombers approached Canadian airspace from the Arctic. The menace underscores the message to the Canadian government and public that the country is at greater risk than it has been in decades.

“They [the Russians and Chinese] have the weapons systems and we are increasingly seeing the intent, so we haven’t caught up to that yet,” University of Calgary political science professor and conference panelist Rob Huebert said in an interview following the incident.

The Russian aircraft stayed in international airspace and didn’t enter U.S. or Canadian sovereign airspace, but it nevertheless highlighted the threat.

Huebert says what’s been holding Canada back is a decades-long multi-faceted problem of attitudes.

Canada is accustomed to playing the “away game” instead of the “home game,” meaning it prefers to face its threats as far away from its borders as possible. Thus the protection of the North American continent requires a change of mindset given the advanced capabilities of the Russians and Chinese.

It’s also naive on Canada’s part to think it can simply talk to Russia and China and get them to play nice.

“We have to be a lot more honest with Canadians,” Huebert said.

A government can favour certain initiatives, and the current one has shown it can generate broad public buy-in for its environmental initiatives. But even if the public isn’t clamouring for better military capabilities—as seen in the lack of interest the topic garnered during the election run-up—experts say the government can no longer ignore the military threat from Russia and China.

“What this government has shown no willingness to deal with is a much more comprehensive understanding of security that encapsulates both environmental security and military security,” Huebert said.

For example, the Liberals didn’t put forth their Arctic policy until a day before the election was called.

‘People have to recognize there is a real threat’

Canadian governments have put a lower priority on defence spending for decades, and that has left a consistent drop in capability compared to potential rivals. A case in point is that Canada opted in 2005 to not be a part of the U.S. ballistic missile defence program.

Contrast that attitude with the Russians or the Chinese and their imperialist goals.

Russia wants to destroy us and China wants to own us, said John Sanford of the U.S.’s National Maritime Intelligence Integration Office, at the CGAI forum.

A power play is shaping up between the United States, China, and Russia, and the Arctic is the epicentre of the military conflict. That makes it Canada’s business, according to defence experts.

“People have to recognize there is a real threat,” said conference opening speaker Commodore Jamie Clarke, Norad’s deputy director of strategy. “We are defending our entire way of life.” At risk is Canada’s economy and infrastructure, not to mention that of the United States.

At the heart of the matter is an outdated detection and deterrence system with no comprehensive replacement in the works.

Clarke was unable to provide a timeline for an upgrade to 1980s-era Cold War-style defence systems in the north.

New money is needed for Norad modernization, confirmed Jody Thomas, Deputy Minister of National Defence, who also spoke at the conference. Funding for the multi-billion dollar project was not set aside in Canada’s 2017 defence policy, titled “Strong, Secure, Engaged.”

“We can’t miss generations of technology the way we have been since World War II ended,” she added. It’s time to bring the North Warning System (NWS), a network of long- and short-range radars across the Canadian Arctic that detects foreign aircraft and incoming missiles, up to the 2020 level of technology—and then decide what’s next. Modernization is not a “one and done” proposition, she said.

Russia’s hypersonic missile threat is being called a game-changer. The low-flying, manoeuvrable weapons can travel much faster than the speed of sound, and the NWS simply can’t defend against it.

Defence experts are advising developing detection capabilities from space—a must for tracking such cruise missiles—given the need for covering wide areas.

National defence has to reorder its priorities to move NWS modernization forward, says James Fergusson, director of University of Manitoba’s Centre for Defence and Security Studies. He calls for a greater integration of air, ground, and space capabilities and an overhaul and streamlining of the procurement process.

“The number one defence priority for Canada as well as the United States—that’s homeland defence,” Fergusson told conference attendees, adding that Arctic defence is the only real gap that exists in the U.S.-led deterrence against potential adversaries.

Defence analysts say the Cold War started up again in 2007–08 when Russia announced it was going to resume long-range bomber patrols. China has a keen eye on the Arctic with its Polar Silk Road and is using scientific research as a screen for military ambitions, say experts.

‘No Longer Protected by Our Geography’

The Arctic remains vulnerable, as the single multilateral forum for it—the Arctic Council—has no mandate to talk about security and defence.

It remains an inhospitable place, but with ice melting and new technology, it is becoming more accessible. National Defence notes that there were fewer than 1,000 flights on polar routes in Canadian airspace 2003, but in 2016, there were over 14,000.

Not only is the Arctic strategically located, which is most evident when looking at the globe from the top, where the distances between Russia and Canada are much shorter, but it also hosts vast reserves of minerals and fossil fuels.

“We are blessed in this country by geography and isolation,” Thomas said, adding, however, that “[we are] no longer protected by our geography.”

Huebert says officials don’t always tell the public when Russia buzzes Canadian airspace, and that the Jan. 31 manoeuvre isn’t out of the ordinary despite the prior reported incident coming last August. There’s a cat-and-mouse game afoot where if Canada were to let the Russians know every time they’re spotted, the violators would figure out when they’re not detected, he explains.

“Russia, as an Arctic hegemon with power projection, they do it because they can,” he said.