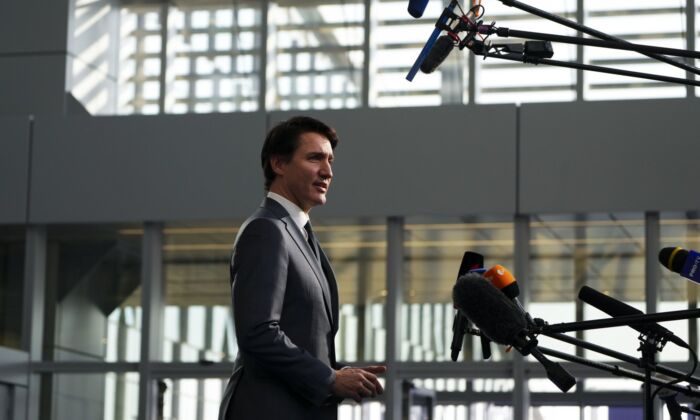 Pressure from Canada’s allies to boost the country’s defence budget marked the end of an extraordinary summit on the war in Ukraine, as Prime Minister Justin Trudeau vowed anew to increase military spending but with only vague suggestions of how to get there.

NATO members gathered Thursday in the Belgian capital, strategizing on the alliance’s latest response to Russia’s invasion of its neighbour and pledging to draw up plans by June to bolster spending on their respective militaries.

Trudeau said Canada agreed to that commitment, but repeatedly sidestepped questions during a closing news conference about whether and how his government would inject substantial new money into the Canadian Armed Forces.

The prime minister instead referred to his government’s 2017 defence policy that promised to invest billions of dollars through new equipment and personnel. Trudeau said Canada had upped its investments in the military, as well as its contributions to NATO.

All NATO members pledged in 2014 to earmark two percent of their national gross domestic products for defence within the next decade. NATO Secretary General Jens Stoltenberg said Thursday that allies had agreed to “redouble” those efforts and submit plans on how to meet the pledge at a June meeting in Madrid, Spain.

NATO estimates that Canada’s defence budget amounts to 1.39 percent of GDP. Even with the billions of new dollars promised by the Liberals’ defence policy for new aircraft, ships and other equipment, the country is projected to fall short of NATO’s target.

Billions of additional dollars to meet the target will have to muscle space in federal spending plans already being shaped by a days-old deal with the NDP to introduce a bevy of new social programs like pharmacare and dental care in return for New Democrat support on key parliamentary votes.

“We have always been committed to doing more on defence, and we will continue to do that,” Trudeau said at the news conference.

“The agreement with the NDP is very much about delivering on specific things for Canadians, but doesn’t in any way impact on the choices we make and areas not covered by that agreement. Canadians expect us to be fiscally responsible.”

Defence analyst David Perry of the Canadian Global Affairs Institute has estimated Canada would need to spend about $16 billion more per year on defence to meet NATO’s target. It currently spends about $30 billion per year.

“There’s no kind of easy, quick solution where the government waves a magic wand and we’re at two percent,” Perry said.

The spending pledge came at the end of a remarkable day in Brussels where NATO, European Union and G7 leaders held a series of meetings about the situation in Ukraine, vowing further support for the country and blasting the Kremlin’s unprovoked invasion.

NATO leaders called on Moscow to immediately instigate a ceasefire in Ukraine, warned of “severe consequences” should Russia use chemical or biological weapons, and called on China to “cease amplifying the Kremlin’s false narratives” and work toward a peaceful resolution to the conflict.

Leah Sarson, a foreign policy expert from Dalhousie University, said the meeting underscored the unity of like-minded partners and reinforced ways “to prevent a disastrous expansion of hostilities beyond Ukraine.” Decisions like sending more NATO troops to Europe’s eastern flank are going to be critical to that response, she said.

Measures from Trudeau included new sanctions against 160 members of the Russian Federation Council and a coming ban on the export of certain goods and technologies to Russia.

Canada and its allies have targeted hundreds of organizations and Russians with ties to President Vladimir Putin. Trudeau said more may come and those already in place could stay for months or years.

“The thing with sanctions like this is, yes, you can start feeling the impact after a few days or a few weeks as we’re seeing right now,” he said, citing a devaluing of the ruble and Russian stock market troubles.

NATO leaders also heard an emotional address from Ukrainian President Volodymyr Zelenskyy who outlined the severe hardship his country has had to bear over the last month.

Russia’s attack has killed hundreds of civilians and thousands of soldiers, and displaced 10 million people since the fighting started one month ago.

Zelenskyy asked NATO for fighter jets and tanks to bolster his forces, chastised allies for failing to do everything possible and voiced frustration with a seeming lack of political will from the alliance to do more.

“Ukraine is very much waiting, awaiting real action, real security guarantees, from those whose word is trustworthy, and whose actions can keep the peace,” read Zelenskyy’s remarks posted online.

Trudeau indicated Canada is looking at buying and sending more weapons to Ukraine after Defence Minister Anita Anand indicated earlier this month that the Canadian Armed Forces’ own stockpile has been tapped out.

“As President Zelenskyy has been asking for various new pieces of equipment, we’re looking to see what we can send,” he said.

“We’re also committed to looking at procuring that equipment directly for the Ukrainians in other ways by working with allies and making investments necessary.”