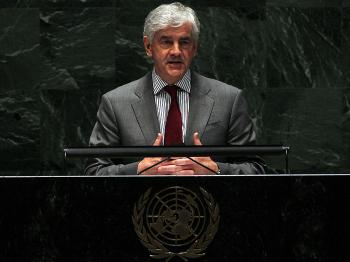 Canadian Foreign Minister Lawrence Cannon speaks at the United Nations 2010 High-level Review Conference of the Parties to the Treaty on the Non-Proliferation of Nuclear Weapons at U.N. headquarters May 3, 2010. (Mario Tama/Getty Images)
International

By Matthew Little
Print
TORONTO—Canada is urging the United Nations to impose further sanctions on Iran for disregarding agreements surrounding its nuclear program.

Cannon said Iran had to address the concerns of the international community about its nuclear program.

“We remain concerned about the potential military links to Iran’s nuclear program, and Iran has made no attempt to comply with U.N. Security Council resolutions,” he said.

Cannon added that Canada "strongly supports" more sanctions via the U.N. Security Council. "We will work with our allies to encourage effective responses to the threat that Iran poses to international peace and security," he noted.

While Canada and the rest of the G8 is backing a U.S.-drafted U.N. resolution that would hit Iran with a new round of sanctions for pursuing uranium-enrichment activities, Turkey and Brazil have voiced disappointment. The two countries recently reached a deal with Iran to have the country ship a significant portion of its uranium stockpile to Turkey.

While Brazilian President Luiz Inacio Lula da Silva was hailed in some newspapers as a master dealmaker for the arrangement, the United States, Britain and France said it did not go far enough and Iran had too often broken similar deals in the past.

Both Brazil and Turkey are among the 10 nonpermanent members of the U.N. Security Council but only permanent members have veto power. All five permanent members—the United States, Britain, France, Russia, and China—have said they support the resolution, which would require nine votes out of the 15-seat council to pass.

Current sanctions against Iran have kept U.S. companies and others from investing or exporting there, putting a significant damper on the economy. Iran suffers from an inefficient state-controlled economy, which gets most of its revenue from declining oil exports.