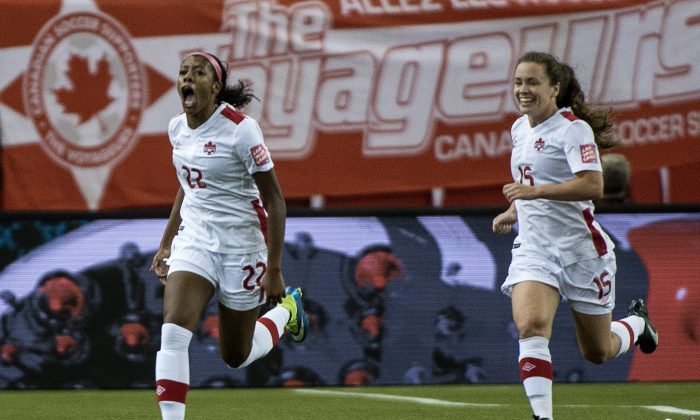 Stars aligning for host nation, but best yet to be seen
By Rahul Vaidyanath
biggersmaller
Print

The Canadian women finished atop Group A—their first objective at the FIFA Women’s World Cup—after a 1–1 draw with Netherlands on Monday in front of a boisterous crowd of 45,420 at Montreal’s Olympic Stadium.

And fortunately for Canada, China didn’t beat New Zealand in a match played at the same time in Winnipeg. With a 2–2 draw, the Chinese finished second and also qualified for the Round of 16.

Canada was expected to win the group, which could be considered the second most difficult based on the average ranking of the teams in it. But the benefits of winning it are immense—an easier road to the semifinals, additional rest days, and, depending on how far the Canadian women go, getting most of those matches at the familiar confines of B.C. Place in Vancouver.

While Canada’s sitting pretty now, the squad hasn’t looked completely convincing. The team has played well for parts of games, but needs to reach a higher level to take advantage of its favourable circumstances.

Head coach John Herdman made big changes to his starting lineup with the introductions of Carmelina Moscato in place of Lauren Sesselmann in central defense, Kaylyn Kyle and Jessie Fleming in midfield in place of Desiree Scott and Jonelle Filigno, and Adriana Leon in attack replacing Melissa Tancredi.

The formula looked good in the early stages of the first half as Canada put Netherlands on its heels. Ashley Lawrence, 20, took over the left flank.

The youngsters are doing awesome. We knew heading into this tournament, they were going to play a major role.
— Christine Sinclair

In the 10th minute, off a throw-in, captain Christine Sinclair directed the ball to Sophie Schmidt whose shot was deflected into the path of Lawrence. Lawrence pounced on the loose ball and put it past Loes Geurts in the Dutch goal. It was Canada’s first goal from open play and Lawrence’s first ever international goal.

“John [Herdman] really stressed as a midfielder, just getting forward and getting in those right positions,” said Lawrence.

But equally important in the first half of play was the continuing stellar individual defending of Kadeisha Buchanan. For a 19-year-old to have the timing and technique she does is truly world-class. She thwarted numerous Dutch threats and is developing into one of the world’s best defenders.

A developing theme with the Canadian squad is the importance of the youngsters in the squad as the veterans like Sinclair, Tancredi, and Sesselmann have been overshadowed by the likes of Lawrence, Buchanan, and even 17-year-old Jessie Fleming.

“The youngsters are doing awesome. We knew heading into this tournament, they were going to play a major role,” Sinclair said. “I think we had the youngest midfield in the history of a World Cup today.”

Sinclair was full of praise for goal-scorer Lawrence.

“She did tremendous, she’s an attacking force for sure,” said Sinclair. “Super-happy for her.”

“That’s the future on display. You think those kids have probably got another four World Cups in them,” Herdman beamed about his youngsters.

The lack of punch in attack was the biggest criticism of Canada coming into the Netherlands game.

While the attack looked livelier, Canada was losing the possession battle and the Dutch had plenty of room to operate.

It was deflating for Canada to get caught on a counter and give up a goal in the 87th minute. Kirsten Van de Ven’s finish was top shelf. Canadian goalkeeper Erin McLeod had no chance. She had just stoned Manon Melis on a partial breakaway two minutes prior.

“[There are] still some areas we gotta tidy up, our strategy to see a game out,” Herdman said.

Canada doesn’t know yet who its next opponent will be. Their Round of 16 game will be played Sunday, June 21 at B.C. Place in Vancouver against a team finishing third out of Groups C, D, or E.

“The ones we want to avoid are obviously Germany, France, USA,” said Herdman. “I don’t think our team’s ready for them yet, but they will be by the time the semis, quarterfinals come once we get our momentum and we keep improving the little things we have to improve. We should be ready for them.”

Canada gets five rest days before its next match—their next opponent could get as little as three days rest. Being the host nation has its privileges.

Anticipation Builds Ahead of Women’s World Cup Draw in Canada
“We’ll get to watch the other teams kick each other,” Sinclair joked.

The stars have aligned for Canada to go far in this tournament. They are back home, where they wanted to be, out on the West coast.

“That was the goal: to make sure we stay out West,” said Herdman.

“Montreal was fantastic tonight, but they can’t wait to play at B.C. Place,” Herdman said about his team.

“The knock-out games are completely different, it’s just all out,” Herdman said. “You see another level of performance from teams and I’m hoping that we can put that out there for the Canadian public.”