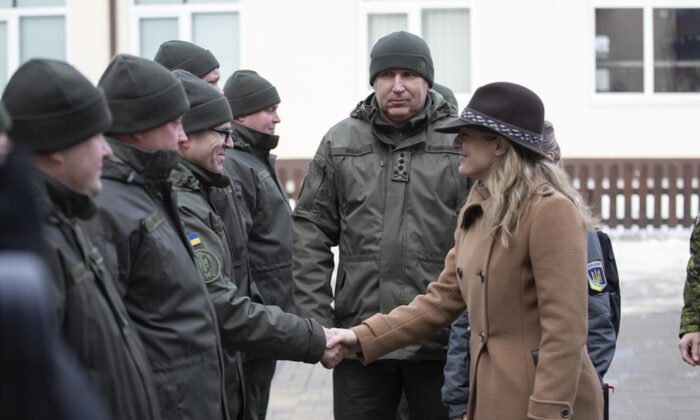 Canada to Sanction Russia for Recognizing Breakaway Regions of Ukraine

Canada says it will impose sanctions on Russia after its President Vladimir Putin recognized the breakaway regions of Donetsk and Luhansk in Ukraine on Feb. 21.

“Canada, with its partners and allies, will react firmly to this blatant disregard for international law,” said Minister of Foreign Affairs Mélanie Joly in a statement.

“We are preparing to impose economic sanctions for these actions, separate from those prepared to respond to any further military invasion of Ukraine by Russia.”

Following Putin’s declaration, on Feb. 22 Russia’s lower house of parliament passed a motion supporting independence for the two regions, known collectively as Donbas, and the parliament’s upper house also voted to allow Russia to use military force outside the country.

Russia is not planning to send troops to eastern Ukraine “for now” but will do so in case of a “threat,” a Russian foreign ministry official told Agence France-Presse on Feb.22.

“For now, no one is planning to send anything anywhere. If there is a threat, then we will provide assistance in accordance with the ratified treaties,” said Deputy Foreign Minister Andrei Rudenko.

Russia Today reports that the deal between the Kremlin and the newly-recognized republics will allow Russia to station troops and military hardware in the area, but Rudenko said “So far, there hasn’t been any talk about setting up bases.”

In response to the Russian military build-up on the Ukrainian border in recent months, which the U.S. says includes up to 190,000 troops, Ottawa increased its support to Ukraine by providing loans, broadening the military training mission, and supplying lethal weapons.

A number of other countries have announced sanctions, with the United States and the United Kingdom also saying the sanctions they are imposing are separate from those planned if Russia actually invades Ukraine.

Some of the measures prohibit any new investments in the DNR and LNR by American citizens and bans the importation of goods, services, and technologies from the regions.

The E.O. also provides the authority to impose sanctions on anyone operating or serving in an official capacity in Donetsk and Luhansk.

The E.O. states its purpose “is to deny Russia the chance to profit from its blatant violations of international law. These actions are not directed at the people of Ukraine or the Ukrainian government.”

On Feb. 22, the United Kingdom announced it was sanctioning three Russian “oligarchs” with close ties to Putin, and freezing the assets of five Russian banks.

“And we are prepared to go much further if Russia does not pull back from the brink,” said U.K. Foreign Secretary Liz Truss.

“We will curtail the ability of the Russian state and Russian companies to raise funds in our markets, prohibit a range of high tech exports, and further isolate Russian banks from the global economy.”

Putin gave a televised address on Feb. 21 in which he expressed his belief that Ukraine is an integral part of Russia’s history and described the eastern Ukrainian region as “ancient Russian lands.”

Donetsk and Luhansk have been in a state of armed conflict with Ukraine since Russian-backed separatists declared independence from Kyiv in 2014, but Russia’s recognition of these areas as separate republics creates a rationale for justifying Russian military action if the breakaway regions call for assistance.