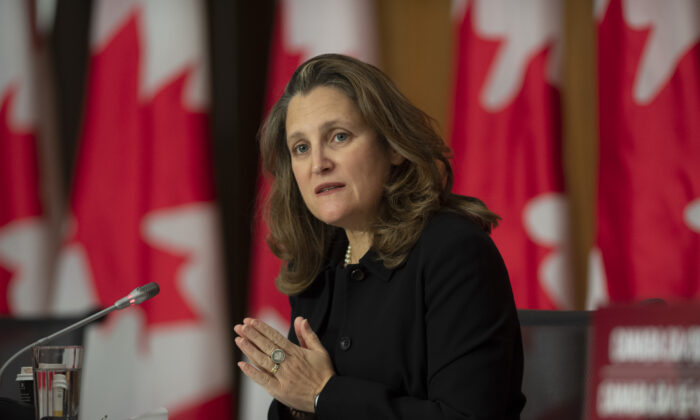 Deputy Prime Minister and Minister of Finance Chrystia Freeland responds to a question during a news conference in Ottawa on Oct. 20, 2020. (Adrian Wyld/The Canadian Press)
Canada

OTTAWA—Canada next week will reveal the breadth of the emergency spending it has made during the pandemic and lay the groundwork for future stimulus and social measures, like a national childcare program, government sources told Reuters.

Canada did not release a budget for this fiscal year, which began in April, because of the economic uncertainty created by COVID-19, but in July projected a $343.2 billion deficit, the largest since World War II.

The new fiscal document, dubbed the Fall Economic Statement, will be released on Monday and will include several scenarios for future spending and growth, and an update on this year’s deficit, which one source said would be greater than the July estimate.

Much of the emphasis in Finance Minister Chrystia Freeland’s first fiscal planning document will be focused on support during the current surge in coronavirus cases, including possible new measures. But there will also be a “down payment” on a national childcare plan announced in September, two government sources said.

“It won’t be the full program,” one of the sources said of the daycare plan. “It will be more a case of laying the groundwork rather than announcing billions in spending.”

There will also be “initial elements” of Liberal Prime Minister Justin Trudeau’s ambitious plans to fight climate change, one source said without providing any details.

“I think most of what we’ll see in Monday’s update will have a pandemic bend,” said Colin Guldimann, an economist with RBC Economics.

Freeland, who became finance minister in August, said last month that the fiscal update would include targeted aid to sectors hard-hit by the coronavirus pandemic.

Five economists said the deficit would most likely be higher than projected in July, with two putting it in a range from $370 billion to $425 billion.

Canada’s pandemic response has created the highest deficit-to-GDP ratio amid major industrialized countries for the year, according to an IMF report, but its net debt-to-GDP ratio remains the lowest in the G7.

“We had more fiscal room than most and we’re using it,” said Benjamin Reitzes, Canadian Rates & Macro Strategist at BMO Economics.

While economists do not expect the government to introduce a new “fiscal anchor” on Monday, Freeland has previously said there is no “blank check” for spending.

The government document will expand upon the idea of “fiscal guardrails” and plot what the government considers a sustainable path forward by focusing investments on measures that are most likely to spur growth, two sources said.

With emergency aid still the key focus, much of the bigger stimulus spending is expected to come in the 2021-22 budget, likely in March or April, which potentially could come out at the same time as a national vaccine campaign.

One thing not expected on Monday is an airline aid package, one source said.

“Those negotiations need to keep going… [the airlines] need to open up their books,” said the source.

By Julie Gordon and Steve Scherer